Between The Sheets By The Mirror 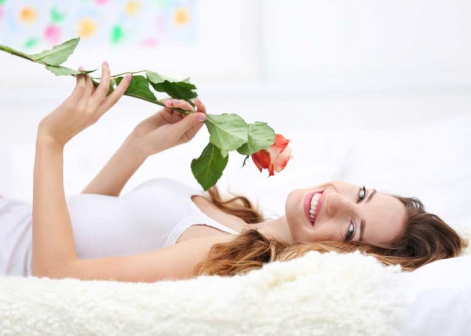 Women might draw the short straw when it comes to many areas of physiology, but not when it comes to orgasms. Our orgasms can last for as long as 20 seconds, whereas a man’s will normally be over in just three. On top of this, women are capable of having multiple climaxes in a single romp – some even report having orgasms into the double figures.

"When a woman is sexually satisfied she feels fantastic – by doing herself some good, she’s doing everyone around her a favour too," says orgasm expert Dr Andrea Pennington, a regular on The Oprah Winfrey Show.

"Women should have three orgasms a week as a minimum. The benefits are numerous, including stress relief from depression and natural pain relief."

But the downside is us women aren’t always reaching our potential – for every three orgasms men have, we’re likely to have just one. Time to start getting jiggy with it…

What happens to your body during an orgasm?

Here's how you can make those waves last longer

As you become aroused, blood rushes to your genitals. A huge number of nerve endings in your pelvis, buttocks and thighs tense up, and when you climax your body releases the tension in a series of pleasurable waves at 0.8 second intervals. A big orgasm might consist of 10-15 waves; a small one 3-5.

Meanwhile, your brain focuses entirely on the sensation, in an altered state of consciousness. No other natural stimulation is capable of creating this level of intense concentration – during an orgasm we lose our awareness of sounds and smells around us.

Why do we orgasm?

While the male climax is tied in with ejaculation, it’s unclear what the exact purpose of the female orgasm is.

Here are some theories…

The over 50s aren't missing out

Although your libido may wane over the years, the quality of your orgasms may get better.

"The reality of sex over 50 is actually quite different from what many believe," says Claire Kim, program director at OMGYes.com , a website dedicated to female sexual pleasure.

"We have a saying that, 'Your grandma has better orgasms than you do,' because older people have more experience and insight into what feels best for them."

Your clitoris has 8,000 nerve endings – double the number in a penis. Sorry, guys!

How to get to 20 seconds

f you find your climaxes are too short and sweet, give edging a try. The technique involves nearing orgasm, but pulling back at the last moment. Repeating this two or three times builds a stronger, longer orgasm in 65% of women. Build yourself up until you’re close to orgasm, and try one of these edging techniques to delay.

Move your hand (or your partner's hand or penis) away when you feel as if you are about to climax. Cool down for a few mins, then start again.

Create sudden sensations away from your clitoris just before orgasm - try tapping or squeezing your inner thigh.