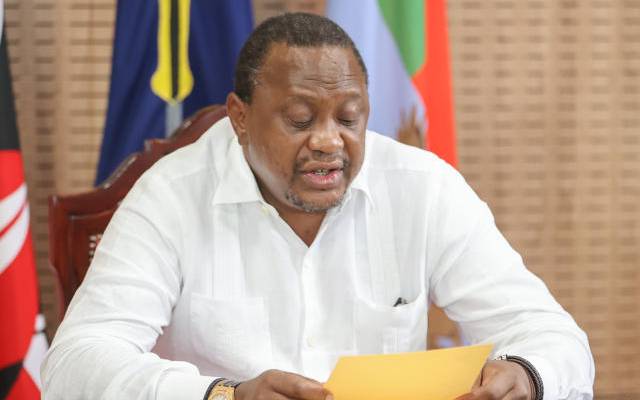 Contrary to the widespread fears and rumours, President Uhuru Kenyatta (pictured above) has spared Kenyans from a total lockdown but has extended the curfew to January 3, 2021.

The new curfew hours will now begin from 10 pm to 4 am and will be strictly enforced with harsh penalties promised for would-be offenders.

The President announced the new measures after he chaired the sixth intergovernmental summit on Wednesday to that deliberated on how to contain Covid-19 in the wake of increasing positivity rates after the relaxation of measures.

Uhuru gave his national address on Covid-19 from State House, Nairobi, lamenting how Kenyans and political leaders had dropped the guard on observing the Covid protocols hence the spike in infections.

"It is a personal responsibility…Even as leaders, we have failed the test. We have been conducting our affairs like there is no virus. Let us walk the talk as leaders,” he said.

He told Kenyans it was a civic duty to observe containment measures. Pegged on this plea was the slogan “No mask, No Service,” which is meant to compel businesses to enforce the measures.

He said: “To win the overall war, the citizens must exercise civic duty and responsibility in observing Covid protocols. I remind you once again, that the government does not have the ability to police the morality of its citizens. We will double our reinforcements but the public will play a critical role.”

In his address, the President announced a number of revised Covid-19 protocols attributing the decision to the alarming infection rates characterised by the high number of daily cases and deaths.

For instance, the President said that country’s positivity rate jumped from 4 per cent in September when the measures were relaxed, to 16 per cent in October. This represents a four-times increase within a span of 38 days.

“Our most successful fight against this virus was recorded after the measures we took on July 27, 2020. The stringent measures saw a fall in new cases from 4720 during the first week of July 2020 to 866 new cases during the second week of September 2020.

But when we de-escalated measures in September 2020, the 866 new cases recorded in the second week of September rose to 6402 cases by the last week of October 2020,” he said.

Just nearly more than 30 days since he addressed the country, where he also emphasised the need for personal responsibility; the President continued the same gospel albeit with a caution that stringent measures are necessary.

“These figures suggest a correlation between stringent measures and a drop in infections. They suggest that in order to heal the country in the long-run, we have to make some sacrifices in the short-run,” he said.

These are measures the president announced: