The good side of being rejected by a woman 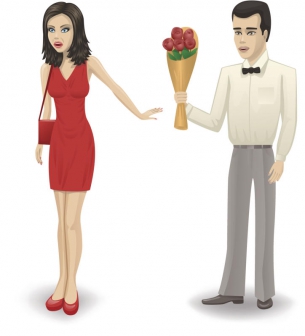 Men loathe rejection. It is the reason we never attempt to approach some women. Rejection stings. It hurts badly. It bruises your ego and permanently scars your pride as a person.

For men, the wound of rejection can be mortal. But it need not be. By the age of 22, you should know that rejection is as much part of human cycle of life as bad politics. Everyone in the world, princes, presidents, star athletes have been rejected at one point in life.

Even the richest man on earth was probably once rejected. Of course, that is before they made their fortune, save for Puff Daddy and Jenifer Lopez, which is the exception to the rule.

Personally, I have been rejected, notably three times in my life. The rejections came as polite NOs, but no less stinging and hurtful. They happened when I was on course to dating these really fine women. They accepted my dates, ate my food and wine, but still said NO in the end. It left me with several questions in my mind... moments of scrutiny but I have come to appreciate that a rejection sometimes can be the best thing that can happen.

Once rejected, you may want to prove a point to the woman and it can lead you to do something productive with your life. One of my friends was once rejected by his woman for lack of ambition. He went back to class and came out with a Masters, which earned him a good job that he now earns an obscene salary. Another one was rejected, went out to look for a job and is now miles apart in terms of income compared to the woman. I have more examples than I can enumerate.

I know women to be too shortsighted. A woman can drop a man because she detests his angular nose. In different circumstances, the angular nose can be her fetish. They never cease shifting their goalposts. A woman mostly rejects a man given his present circumstances. It is mostly broke men and men between jobs who are being rejected. Yet, circumstances are never permanent. They change, actually sooner than later.

Rejection also offers one an opportunity for self-examination. After being rejected, especially by the unlikely woman, you tend to examine yourself and determine what is wrong with you. It offers you room for improvement, be it verbal skills or your wardrobe. Often, a woman is entitled to reject you by the way you present yourself. I have seen men who think they are the best thing that ever happened to women. They take offense when a woman dismisses them, and I always hope that that humbles them.

I have also noticed that rejection can also be a good source of schadenfreude. Don’t we all feel elated when something bad happens to the person who rejected us? Especially if their suffering has something to do with the person they chose over you. It is most natural. After a woman rejects, especially if you really wanted her, you always stalk her, from time to time to see how she is doing. Good news comes when you hear she is suffering, one way or another.

Finally, rejection makes sense if you become a big personality with fame and fortune, and you go for an average woman whom you are proud of, as the striking model who rejected you gossips about you in the salon. Win.

Wawira Njiru: I started an award-winning organisation while still a student
Achieving Woman - By Peter Muiruri