No threat will force healthcare workers back to hospitals. The medics stood their ground after a meeting meant to resolve their strike flopped.

The country now faces complete paralysis of health services, as doctors will also be joining nurses and clinical officers starting today, to push for better working conditions and enhanced allowances, among other issues.

Doctors had suspended their strike for 14 days to allow for more talks, but on Saturday, they announced resumption of the strike today.

Clinicians and nurses began their strike on December 7 and have been in and out of a series of meetings since.

Yesterday, officials of the Kenya Union of Clinical Officers (Kuco) and Kenya National Union of Nurses (Knun) said they were called to the Ministry of Labour offices for an impromptu meeting for a possible return-to-work formula deal, but none of the government officials was present.

“We were told to come and sign an offer on the table... only to arrive and find the decision makers on the ground not present,” said Kuco chair Peterson Wachira.

“We have no deal and the strike continues as announced.”

Mr Wachira said the ongoing talks for the past two weeks were bound to fail since neither the Ministry of Health nor Council of Governors officials were present.

“Unfortunately we were here by 10am. The secretariat (in charge of the negotiations) asked us to wait for the Labour CS and CoG chair. At 1pm we were told they were not coming,” said Kuco General Secretary George Gibore.

Mr Gibore said no healthcare worker, including the ones being hired, would return to work until the government meets all their demands.

Counties such as Kisumu have issued notices to sack medics. The notice, signed by the county Chief Officer in charge of Health and Sanitation Gregory Ganda, directed the medics to return to work in seven days, or lose their jobs. 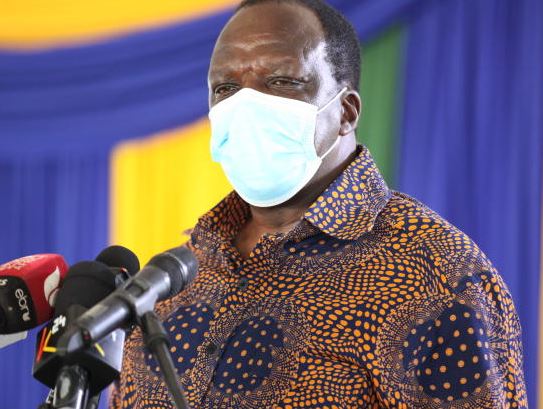 CoG Chair Wycliffe Oparanya (pictured) said the demands of the healthcare workers were beyond the counties.

“The demands being made by health workers like risk allowances and having a health commission can only be handled by the national government, not counties.

Devolved units have no powers to form the Health Service Commission through the county assemblies. Besides, the issue of allowances is a preserve of the Salaries and Remuneration Commission,” said Oparanya, who is also Kakamega governor.

Kenya National Union of Nurses Deputy Secretary-General Maurice Opetu said the government was not committed to ending the impasse.

“He (Health CS) should redirect those threats to Kenya Medical Supplies Authority to release the personal protective equipment and the Covid-19 billionaires,” said Mr Opetu.

“If he thinks they will replace us with young medics, yet the likes of Dr Stephen Mogusu are dying from the virus, then he is getting it wrong.”

The unions’ leaders yesterday trashed the orders the Health CS referenced while issuing the threat on job losses, saying that only affected Ministry of Health healthcare workers who started their strike on November 19.

State to spend Sh10b on jab as corona cases rise