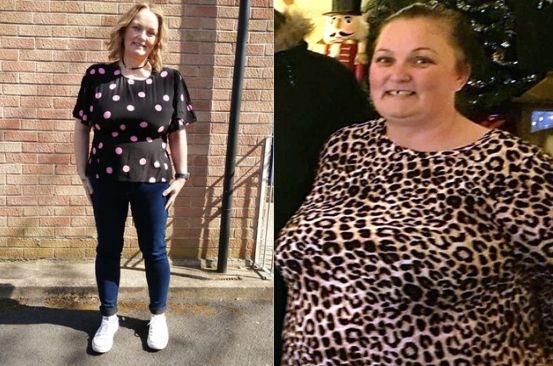 A woman who had ­ballooned to 127kg (20 stone) lost more than a third of her body weight in 10 months after ­a ­doctor gave her the wake-up call: “Diet or die.”

Kelly McCracken, 42, was a size 28 and so big that boyfriend Steven Hall had to help her wash and dress.

She would guzzle five litres of cola a day and gorge on pizza, chips, cakes and family-sized boxes of mini Daim bars – even eating leftover pizza for breakfast.

Her weight had spiralled out of control after she had her sixth child – son Curtis, seven.

And she was forced to change her ways after being rushed to hospital with diabetes and high blood ­pressure in March last year.

Kelly said: “The doctor told me I would die and not make it to Christmas if I didn’t do something about my weight. I was in the hospital bed and made Steven sign me up to Weight Watchers online. That was the day my life changed.”

Kelly changed her diet and got into exercise – and now weighs 82kg (13 stone) and is a size 14. She said: “My boy used to tell his teacher he was scared Mummy might not pick him up because she might die.

“He knew his mummy was bigger than other mummies.”

And things were a strain for accountant Steven, 51.

Kelly said: “He would have to help me dress because I was so fat I couldn’t put on socks and he would need to help with my trousers.

“But the biggest humiliation was him washing me because I couldn’t get in and out of the shower.”

Now, Kelly is determined to maintain her new trim figure.

She said: “I can wear clothes that would never have fitted before and I have become a gym-bunny.

Five reasons why you need to take prenatal vitamins