﻿﻿ Evewoman : 'The coil nearly killed my fiancee after she contracted sepsis twice' ​
​

'The coil nearly killed my fiancee after she contracted sepsis twice' 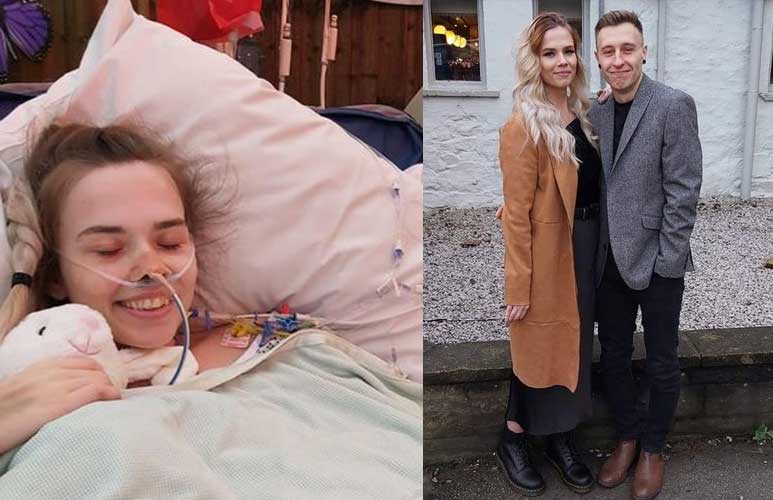 ALSO READ: Family planning options for the man who wants to take charge

A terrified woman was left fighting for her life after she contracted sepsis twice from her contraceptive coil.

Jess Cowgill, 25, had the copper coil fitted to stop her from getting pregnant about seven years ago.

But earlier this month, it became embedded in her womb - causing her to suffer the deadly infection twice.

Doctors were forced to warn her family that she might not pull through after her liver and spleen shut down.

But incredibly Jessica started to rally and respond to treatment.

Now, as she continues to slowly get better, her fiancé, Nathan Grogan, has spoken out to warn other women to be aware of the risks before having a coil fitted.

Nathan, 27, said: “She’s got an open abdomen, and a blood clot on her neck and fluid in her lungs.

“She’s still got abscesses and is due to have a CAT scan later today to see what’s going on.

“It’s all been so quick, in a short amount of time she’s been through two life-threatening surgeries and we were warned she might not make it out alive.”

The ordeal began earlier this month after Jess, of Blackburn, Lancashire, began suffering from stomach pain.

But she was sent home with antibiotics after doctors treated her symptoms as a urinary tract infection.

But after just one day, when the pain got worse, she visited the Royal Blackburn Hospital.

Staff made the shock discovery that her coil had become embedded in the wall of her womb - which led to her developing sepsis.

Nathan said: “Jess has had the coil for about seven or eight years.

“It started out that she had stomach pains and she was sent home with antibiotics at first.

"But we returned a day later when it got worse.

“At first they couldn’t see what the cause was as she had a lot of fluid in her stomach.

“So they decided to do a keyhole surgery to see if they could find out what was going on.

"They found that it had become inserted into the wall of her womb.

“And that had turned into an infection which spread through to her fallopian tubes, her ovary, and her stomach.

“It turned septic and then started to shut down her organs.”

Doctors warned her shocked family that Jess might not make it but following the initial operation, she began to recover.

Nathan said: “They thought they had removed everything and she was moved over to intensive care.

“At this point, we were told that she might not pull through, it was terrifying.

“Then she was in ICU for a few days before she was moved down to a high dependency ward.

“But she started to suffer pain again that was even worse than before.

“Her doctors did another CAT scan and they had to send her back into surgery.

“They told us the sepsis had come back with a vengeance and it was ten times worse.

"It began to shut down her liver and her spleen.”

But Jess made it through the second surgery and is now beginning to recover - although doctors have warned there is a long journey ahead.

She currently still has a blood clot in her neck, fluid in her lungs and abscesses in her stomach.

Jess and Nathan, who met when they were teenagers, became engaged in 2015 after he left the army.

And they may not be able to have children in the future after part of her womb, fallopian tube and ovary were removed.

Nathan said: “It was something we were thinking about before this happened.

“It’s one of those things that isn’t the end of the world, there’s different ways and means.

“Jess has taken it really well that there could be a possibility that we may or may not be able to have children.

“She’s handled it so well. At the end of the day, it doesn’t matter as long as she’s here.”

At the height of her infection, Nathan, who works for a vaping firm, considered holding a wedding on the hospital ward.

He said: “We were going to try and get it done in the hospital.

“After the second surgery, they said she might be in hospital for up to 18 months.

“So that was the first thing on my mind but now if things keep going the way they are, she is due to come home within ten weeks.

“It’s still going to be a long road to recovery but I’ll be there with her family every step of the way.

“Instead, I think we’ll try and do a small wedding, maybe in a registry office.”

Now Jess is urging other women to be aware of the risk of having a coil fitted.

Nathan said: “Jess is really keen that women listen to their body if they think something is wrong.

“You get young girls who might think its period pain but it could be something worse.

“And after the first surgery, it was Jess that said that something didn’t feel right and she was in more pain.

“And we want to get the message out there that people need to be careful about what they are putting in their body.

“There’s so many different types of contraception, they shouldn’t be turning to these types of things.”

Family planning options for the man who wants to take charge