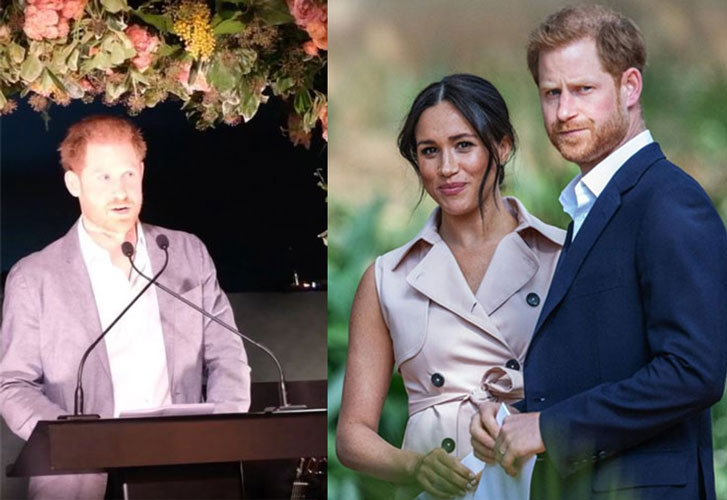 Prince Harry has said that the UK will always be his home and the place he loves in a moving speech this evening.

But, he said he had 'no other option' but to quit the country for North America.

He was speaking at the Ivy Chelsea Club in London at an event for his charity Sentebale.

He wasted no time in tackling head on the issues that have been swirling around him and Meghan since they announced their plans to split from the royal family almost two weeks ago.

"So, I want you to hear the truth from me, as much as I can share – not as a Prince, or a Duke, but as Harry, the same person that many of you have watched grow up over the last 35 years – but with a clearer perspective," the royal began.

"The UK is my home and a place that I love. That will never change.

"I have grown up feeling support from so many of you, and I watched as you welcomed Meghan with open arms as you saw me find the love and happiness that I had hoped for all my life.

"Finally, the second son of Diana got hitched, hurray!"

Harry went on to explain how his and Meghan's decision to leave his senior role in The Firm had caused them 'great sadness'.

"I also know you’ve come to know me well enough over all these years to trust that the woman I chose as my wife upholds the same values as I do," he continued.

"And she does, and she’s the same woman I fell in love with.

"We both do everything we can to fly the flag and carry out our roles for this country with pride.

"Once Meghan and I were married, we were excited, we were hopeful, and we were here to serve.

"For those reasons, it brings me great sadness that it has come to this.

"The decision that I have made for my wife and I to step back, is not one I made lightly. It was so many months of talks after so many years of challenges.

"And I know I haven’t always gotten it right, but as far as this goes, there really was no other option.

"Our hope was to continue serving the Queen, the commonwealth, and my military associations, but without public funding. Unfortunately, that wasn’t possible."

Harry said he hoped their move away from the current senior royal roles would help him have a more 'peaceful' life.

He went on: "When I lost my mum 23 years ago, you took me under your wing.

"You’ve looked out for me for so long, but the media is a powerful force, and my hope is one day our collective support for each other can be more powerful because this is so much bigger than just us."

The Prince also revealed how Archie had recently seen snow for the first time and thought it was 'bloody brilliant'.

He also took the opportunity to praise his grandmother, The Queen.

"I will always have the utmost respect for my grandmother, my commander in chief, and I am incredibly grateful to her and the rest of my family, for the support they have shown Meghan and I over the last few months," the Prince gushed.

"I will continue to be the same man who holds his country dear and dedicates his life to supporting the causes, charities and military communities that are so important to me.

"We are taking a leap of faith - thank you for giving me the courage to take this next step."