A simple Google search on divorce brings out 359 million results, with top on the class being American billionaire Bill Gates, whose recent divorce with Melinda Gates after 27 years became a global talking point.

Others whose billions did not save their marriages include Jeff Bezos, Elon Musk, Larry Ellison, and Spanish clothing retailer Amancio Ortega. Besides splitting their fortunes 50-50, how else does a billionaire suffer after a divorce?

Well, for one, there is the effect of divorce on mental health, with men suffering the most. Depression and attendant psychological complications also have an effect if one has underlying health issues as divorce only worsens cases of diabetes, hypertension, ulcers, weak hearts and suicide.

The health effect of divorce on people is no respecter of socio-economic background and matters are no different in Kenya, where divorce cases have been rising from January 2020 after the three-year ‘Judicial Separation’ was lifted in December 2019.

The Covid-19 pandemic has led to layoffs and business losses, shaking off many marriages, financially speaking. The free time the pandemic brought courtesy of working from home, curfews and lockdowns led to accusations of adultery, physical and emotional abuse, further wreaking marriages already strained by couples getting too familiar in the ensuing forced isolation.

City lawyer Jackson Ndegwa says “every month there is a couple divorcing” and he blames “adultery, a failed marriage, dissertation and cruelty” as the four main leading factors.

In African setups, divorce was unheard of, but women’s liberation, girl-child empowerment and exposure through education long changed everything. Indeed, just last year, the divorce between Meru Senator Mithika Linturi and Maryanne Kitany was conducted with television cameras rolling. Does divorce affect public figures more than those who get lost in the shadows?

Wangari Maathai, now deceased, painted the picture of how it is like when she divorced Mwangi Mathai, the late former Lang’ata MP.

In her 2006 memoirs, Unbowed: One Woman’s Story, Prof Maathai, now deceased, notes that when the house-help told her that the man had packed and left “I was stunned”.

“This was real: Mwangi had made a decision to leave me” because among other things “Mwangi accused me of adultery, of causing his high blood pressure and of being cruel.”

Divorce cases come with damning, embarrassing allegations that can cause untold mental anguish. Maathai writes that “with every court proceeding, I felt stripped naked before my children, family and friends. It was cruel, cruel punishment” and when she appealed the adultery ground of the divorce, Appellant judge Cecil Miller, (deceased), dismissed it.

Olympic champion David Rudisha confessed to being an alcoholic after divorcing Elizabeth Naanyu in 2016, a month after the birth of their third child. Rudisha lost weight, but it was the drinking that almost got the better part of him as “during periods like that,” he said in an interview, “you look for a bit of distraction to distract yourself.” He has since regained his weight and composure besides qualifying for the forthcoming Tokyo Olympics, where he will be attempting a third gold in 800m. 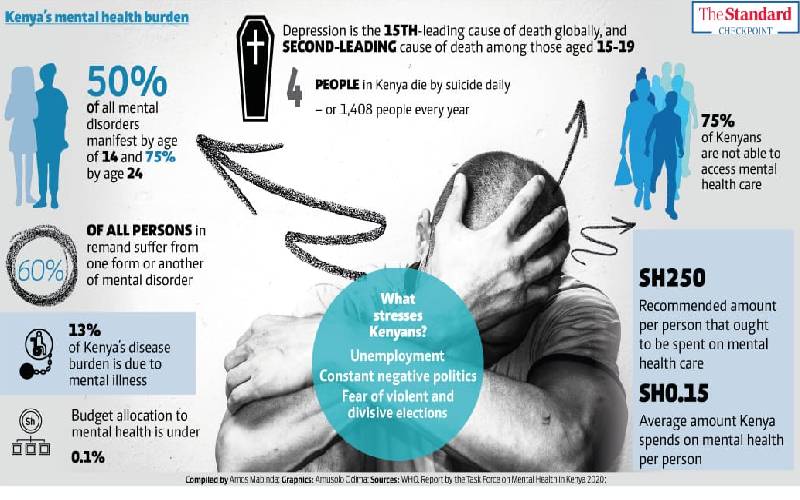 Samburu Senator Steve Lelegwe’s wife Beatrice Maseina left him six times before they finally called it quits. He married a fetching second wife - on November 21, 2020 - the same date he divorced his first wife the previous year, and noted that some unions “can frustrate you to an early grave.”

Their domestic wrangles began when he was still Samburu County Speaker and the ensuing divorce left him stressed and unable to work properly at the Assembly, he said.

In her divorce papers, his wife Beatrice cited “cruelty and a hostile and tense environment”, which, she said, was not conducive for their children’s studies.

Clinical psychologist, Dr Michael Mbiriri says the mental effect of a divorce can either be positive or negative as there are couples who become relieved especially when a relationship was filled with abuse and misunderstandings.

“It is advantageous to a certain extent as the psychological well-being of some ends up improving, explains Dr Mbiriri. “However, there are some that end up overly negatively affected and drown their sorrow in alcohol while others battle  insomnia, depression and poor self-esteem.”

“When one has depression or stress other underlying conditions are likely to come up,” says Dr Mbiriri “because of low immunity which is susceptible to opportunistic diseases.”

Women going through a divorce, says Dr Mbiriri, develop ulcers and high blood pressure even though research shows men cope poorly with some falling prey to predator women masquerading as sources of consolation.

Unlike women, men zip up and rarely share their pain, failures, worries. Divorce proceedings can lead to social isolation, loneliness. Men are as fragile as they are macho. For most, domestic tiff can result in clinical depression, hypertension, heart attacks, suicidal thoughts. Divorce also socially destabilize men and they change plans, lose interest in life.

Faith Nafula Atsango, a counseling psychologist, says that women cope better than men as they easily talk, share out their feelings.

“What affects men majorly is that they get shocked especially when being divorced. There is this notion that women will always stay for children’s sake but when they finally leave, it becomes a wake-up call to men,” explains Atsango adding that men bottle up their emotions only to release them in drinking sprees which never solves anything.

Crying, for men, is taboo, and the male ego does not help matters, and fear of being a laughing stock, having not been able ‘to hold their house together’, has most men suffering in silence.

The biggest burden for women, says Atsango, is guilt, and which can be curbed via taming expectations. “Fill time with something productive, work on yourself.”

There is no major difference between the rich and poor when madding through a divorce court since “if it’s about pain, all go through it,” says Dr Mbiriri. “The only difference can be the rich are able to afford psychosocial services that can allow them to heal from the trauma.”

Lawyer Ndegwa pegs the high rate of divorces on “people having trial marriages. There is little time dedicated to courtship and people end up marrying fast and later on realising they were not compatible or one had traits of abuse that could not come out soon enough.”

Before a marriage reaches divorce stages, couples need to re-evaluate scenarios so that they do not get “comfortable with each other and lose the taste of marriage leading to divorce,” advises Atsango. “Try out better communication, lunch dates, holiday for you two to rekindle your love before finally signing that (divorce) paper.”

Atsango says the stigma that comes with divorce means training children to know life has two coins-losing and winning. She reckons the boy child needs early training of how to handle emotions. “Teach them that crying is okay, that they will face rejection... they can get over it. That way they grow understanding that marriage may or may not work.”

By Rose Mukonyo Jan. 23, 2023
How stigma turns people with HIV away from health facilities
.