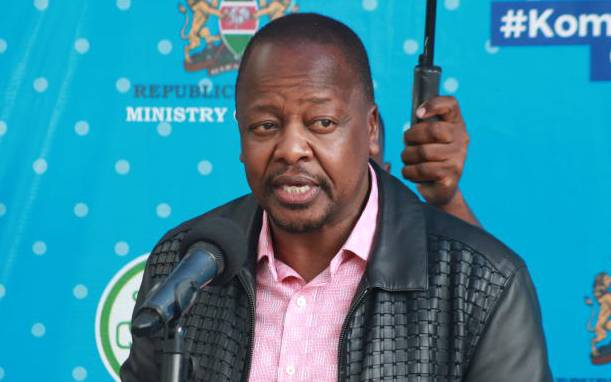 The government has banned movement by air and land in and out of Mandera County as coronavirus cases by way of community infections in the county increase.

The infections rose by seven in the past 24 hours bringing the national tally to 303.

“Out of 707 samples tested, we have received 7 more confirmed cases of coronavirus. Thus the number in Kenya now stands at 303. All 7 are Kenyans,” Health CS Mutahi Kagwe said in his daily briefing.

The CS (above) said the restriction of movement in and out of Mandera County was in a bid to curb community-based Covid-19 infections that have been on the rise within the county.

Mandera now becomes the fifth county where the government has imposed cessation movement.

President Uhuru Kenyatta had imposed a three-week ban on movement in and out of four main coronavirus infected areas of Nairobi, Mombasa Kilifi and Kwale.

The CS criticised a section of Kenyans for disregarding the measures by the government in the fight against the virus.

He said there were few Kenyans who disregarded his daily national briefings.

It’s unfortunate that some naysayers have dismissed the briefing as mere daily lectures. We refuse to sit back and we will continue to inform Kenyans of what they should do to flatten the curve,” he said.

Following the global trends and Government’s analysis, the CS warned a slight lapse in behaviour could roll back the gains made so far and by implication, the destiny of the nation.

“This past week alone, we have seen significant changes of infections in our own neighbourhoods whereas Covid-19 cases in Somalia have multiplied nine-fold in a week from 26 cases on April 13 to 237 by yesterday,” he said.

Health Ministry Director-General Dr Patrick Amoth said that the government was planning to adopt the use of certain drugs that have yielded good results in some countries like the US. One of those drugs is the hydroxychloroquine which he said could be helpful but dangerous for Covid-19 patients with heart problems.

He further warned that paracetamol, which has been in use may also have adverse impacts on some patients too.

At the same time, the CS noted that the Government was concerned about mental health during the pandemic. He urged Kenyans to call 1199 for psychiatric and psychological care.