It's been a busy decade for the Royal Family, with countless highs and lows for the Queen, Prince Philip and their relatives.

We've had weddings, babies, a jubilee, landmark anniversaries and a scandal in the last 10 years - all of which will shape The Firm's future.

And the line of succession looks very, very different than it did ten years ago with six new babies - each bumping the less senior royals way down the list.

The past 12 months have been perhaps some of the most difficult for the Queen and her relatives, with many describing it as her horribilis II - challenged only by 1992.

She made reference to the challenges of 2019 in her Christmas speech, saying: "The path is not always smooth, and may have at times, this year, felt quite bumpy, but small steps can make a world of difference."

We've had a look back over the past 10 years at some of the moments that have changed the Royal Family forever.

After years of dating, Prince William finally popped the question and made his university girlfriend Kate Middleton his royal bride.

The Queen's grandson got down on one knee while they were on holiday in Kenya, giving her the diamond and sapphire engagement ring that once belonged to his mum Princess Diana.

Speaking in their engagement interview, he said: "I regularly daydream. Africa is definitely one of the places I go to. It does completely settle me down. [Kate] understands what it means to me being in Africa, and my love of conservation.

"I didn’t really plan it that far in advance. I just knew I wanted it to feel comfortable where I did it."

The couple tied the knot at Westminster Abbey before heading to Buckingham Palace for the private party - and of course that historical balcony kiss.

The couple treated their guests to a performance of You’re The One That I Want from Grease during the evening celebrations.

They strutted and sang their way through the John Travolta and Olivia Newton-John classic to the delight of guests who were clapping and cheering at the beaming newlyweds.

According to many of the guests one of the highlights of the glamorous event was Prince Harry's Best Man speech.

A guest revealed: “Harry only said a few words, but it was so emotional. The entire room burst into applause.”

Wearing a fez hat Harry had started his speech by standing on the top table and describing the newlyweds as the “Dude and Duchess”.

The following year Kate and Will announced that they were expecting their first child - a royal baby who would one day be king or queen.

The couple had to make the announcement earlier than planned as Kate was hospitalised by extreme morning sickness.

The couple introduced their son to the world on the steps of the Lindo Wing, just as William's parents Princess Diana and Prince Charles did when he was born.

The couple beamed as they waved to photographers before getting into their car and taking their newborn home.

Prince George is third in line to the throne after his grandad Prince Charles and dad Prince William. 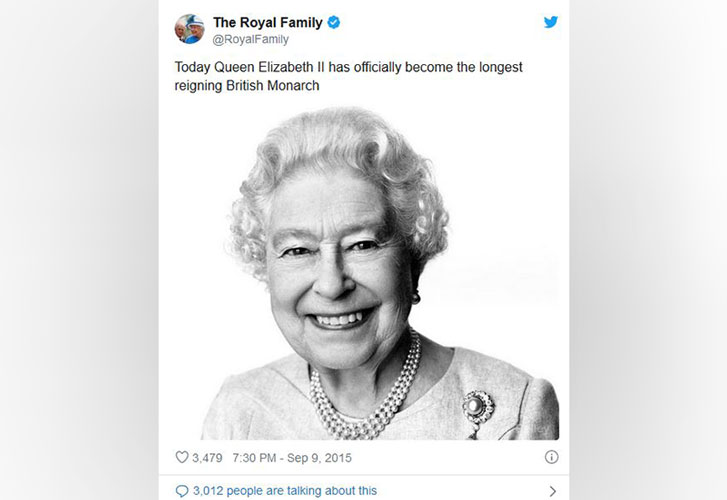 On September 9, 2015, the Queen overtook Queen Victoria to become Britain’s longest reigning monarch with a reign of more than 63 years 216 days.

Speaking of the milestone, she said: "It is not one to which I have ever aspired...But I thank you all."

The then 89-year-old Queen marked the day with a 'business as usual' attitude opening the new Scottish Borders Railway by taking a train with Prince Philip and Scotland's First Minister Nicola Sturgeon from Edinburgh Waverley to the Borders towns.

Although she said she didn't want a fuss the cheering crowds were out in force to mark the occasion.

William, Kate and Harry talk about their mental health

The three young royals made history when they became the first royals to speak openly and honestly about their own mental health as they launched their charity Heads Together in 2016.

Speaking about his mum Princess Diana's death, Harry said: "I can safely say that losing my mum at the age of 12 and then shutting down all of my emotions for the last 20 years has had a quite serious effect on not only my personal life, but also my work as well.

"My way of dealing with it was sticking my head in the sand, refusing to ever think about my mum, because [I thought], why would that help? It's only going to make you sad. It's not going to bring her back."

It's a cause they have continued to champion ever since, with Meghan joining their efforts when she joined the family.

In 2017, William said: "Everyone knows that feeling when life gets on top of us. All over the country, millions of us face challenges to our mental health.

"At all ages, at all intensities and for all sorts of reasons. We feel stressed, low, anxious and have trouble sleeping. Me, you..."

The Queen's husband - the Duke of Edinburgh - bowed out of public life in August 2017 at the grand old age of 96.

With 22,219 solo engagements under his belt since taking up royal duties in 1952, it was a historical day for the family.

Speaking to the Royal Marines and referring to their fundraising efforts, he joked: "You should all be locked up."

The Duke was attending a parade of Royal Marines, where he was meeting servicemen who have taken part in a 1,664 mile race to raise money for the Royal Marines Charity.

Despite bad weather, many still flocked to outside the Palace to peek through the fence railings at the significant moment in royal history.

Wearing a black bowler hat and a long coat to stay dry, the Duke appeared in good spirits during the event when Royal Marines marched past him.

He attended Kate and William, Eugenie and Jack and Meghan and Harry's royal weddings - looking very much the proud grandad.

The Cambridges' second child Charlotte made history on the day her younger brother Prince Louis was born.

Princess Charlotte became the first female royal to retain her claim to the throne and not be bumped down the line by the arrival of a new male.

The change is thanks to the Succession to the Crown Act 2013.

It states: "In determining the succession to the Crown, the gender of a person born after 28 October 2011 does not give that person, or that person’s descendants, precedence over any other person (whenever born)."

If this change hadn't been introduced Princess Charlotte, who is currently fourth in line to the throne, would have been bumped down to fifth if Kate had a boy. Louis would have taken her spot.

But now Louis will be fifth in line to the throne, even though he's a boy, below his big sister.

In November 2017 Prince Harry announced he was to marry his American actress girlfriend Meghan Markle.

Meghan shot to fame in the legal drama Suits, and dated the prince after a mutual friend set up a blind date in July 2016.

The Queen's grandson popped the question at the couple's Kensington Palace home while they cooked a roast chicken.

Meghan admitted it was "sweet, natural and very romantic" and just a "standard typical night in" for the pair.

She admitted she "barely" let her husband-to-be finish proposing before she said: "Can I say yes now?"

Their royal wedding was very different to Kate and William's, but still filled with all the royal tradition and pomp.

They tied the knot at St George's Chapel in Windsor Castle, followed by two glamorous receptions.

Meghan is the first person of mixed race to join the Royal Family.

She once said in an interview: "While I could say Pennsylvania and Ohio, and continue this proverbial two-step, I instead give them what they're after: 'My dad is Caucasian and my mom is African-American.'"

There was a lot of excitement after Meghan Markle and Prince Harry announced they were expecting their first child - just a few months after their royal wedding.

But as expected, they didn't play by the royal rule book and did things their own way when it came to announcing the birth and introducing their first born to the world.

Archie Harrison Mountbatten-Windsor was born on May 6, 2019.

Going against tradition, the couple didn't share details of Meghan giving birth, meaning fans and media couldn't wait outside the hospital to cheer the new arrival.

Instead, they announced the birth on Instagram hours later - and Harry gave an unscheduled interview at Windsor Castle.

Rather than posing on the hospital steps, Meghan and Harry arranged a photocall with just a couple of members of the media where they proudly showed off their new son.

The Duke and Duchess of Sussex spoke openly and honestly about their struggle to deal with the media spotlight in a very different kind of Royal documentary.

Meghan & Harry: An African Journey featured emotional interviews with both royals, which received a mixed reaction around the world.

Meghan appeared to hold back tears as she's "not OK" and described the past year as "really challenging".

Some praised them for sharing how they're feeling, while some described it as an "utter disaster" for the Queen and the Royal Family.

PR expert Mark Borkowski believes the hour-long ITV special split the nation, and while younger people are more attuned to it, some older fans won't be so impressed.

It sparked fears of a breakdown in relations within the family, with a source telling the Mirror that senior royals are "concerned for the couple".

The documentary was another example of how Meghan and Harry are doing things their own way - something that will inevitably continue in 2020.

Prince Andrew steps down from all royal duties

At the end of 2019 Prince Andrew - often referred to as the Queen's favourite son - was at the centre of a royal scandal thanks to his friendship with Jeffrey Epstein.

There had been many questions and criticism of his ties to the disgraced American financer, so he decided to do a sit down interview with Newsnight's Emily Maitlis to tell his side of the story.

However his plan backfired and his words caused upset and outrage, and the Queen effectively 'sacked' him just days after it aired.

The car crash interview threw the Royal Family into an unprecedented crisis that was worsening by the day, and after discussions and grovelling apologies, a bombshell statement was released by Buckingham Palace.

Andrew has been forced to step back from his more than 200 charity patronages and his statement signalled he was willing to cooperate with investigators, including the FBI.

He will no longer receive his £249,000 royal allowance which is taxpayers' money from the Sovereign Grant and he has been ditched by a number of companies and charities.

The Queen has also cancelled her son's 60th birthday party amid the scandal.