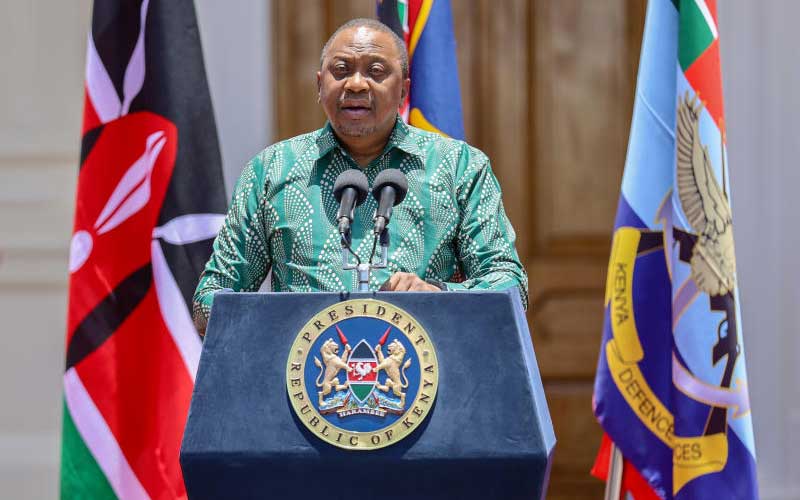 He said the country, which was "at war and must win", had since tested a total of 4,277 people.

Uhuru said the death toll from the highly-contagious virus had risen to six after two more people died in the past 24 hours.

This is as the number of fully recovered cases remained four.

"This virus is unforgiving and its rate of growth, if not arrested, is exponential. Yet because it cannot be smelt, it is an enemy that can easily convince you that life can continue as normal,” President Uhuru said at State House, Nairobi.

He warned that since most people who contracted the virus recovered without showing severe symptoms, it could spread to more people and lead to an unprecedented loss of life.

"I will, therefore, go to any lawful length to respond to this pandemic," he said.

He added that governments all over the world, including his own, were taking unprecedented steps to contain the virus spread and flatten the curve.

"Different measures are being taken across the globe depending on every country’s unique circumstances. But what is clear from their experience is that the pandemic is likely to continue spreading with lethal effect without drastic action."

Uhuru held that it will not be business as usual as his government would treat the situation like the extraordinary emergency it was, saying that everyone "must be ready for the worst".

"If we act like the fingers folded into a fist, we will stop the damage this pandemic would cause," he said.

He called on everyone to adhere to government directives aimed at containing the virus spread and directed that all in public spaces must wear masks, wash their hands frequently, as it would save lives.

The President further called on people to avoid areas where others will be closer to them than 1.5 metres.

Also, he advised that those who are over 58 years and have chronic ailments should be spared infection by taking extra care not to expose them to the virus.

"The success will need you as individual citizens to comply with the different directives, and we as a people to be united. This virus is in nearly all countries and territories on the Globe. It does not care about your religion, the colour of your skin or the size of your wallet."

He went on: "It is not infecting members of one tribe while staying away from another. Defeating it will require us to put aside our usual differences and to face this enemy standing side by side."

At the same time, President Uhuru Kenyatta announced more measures to contain the virus spread, including limiting movement in and out of four counties for 21 days.

Movement in and out of Nairobi, which has recorded 82 per cent of the cases, by road, rail or air has been banned effected today at 7 pm.

Please note :- Movement WITHIN the Nairobi Metro Area as defined in the Legal G.N. is PERMITTED subject to existing curfew,wearing of face masks & social distancing. What is PROHIBITED is movement IN TO & OUT OF the gazetted area for the period of 21 days effective 7.00pm tonight — Nzioka Waita (@NziokaWaita) April 6, 2020

The president also banned the movement in and out of three counties on the Coastal strip – Kilifi, Kwale and Mombasa – where an additional 14 per cent of the cases have been recorded. The directive takes force on Wednesday.

You can read the full story on the partial lockdown HERE.