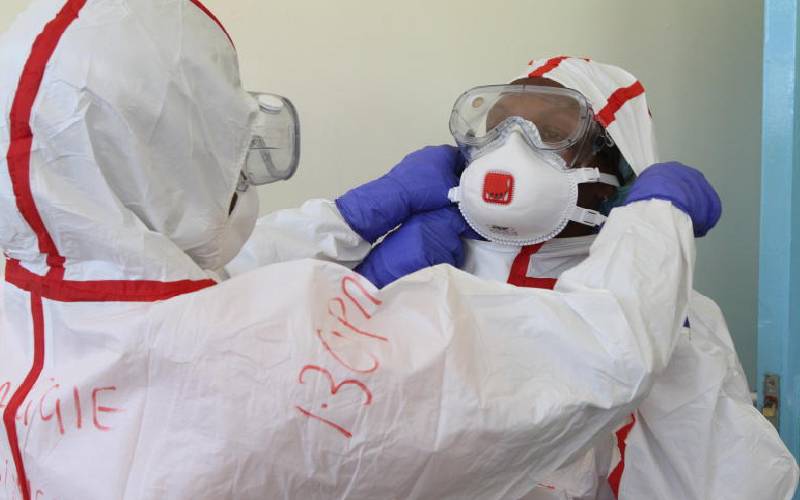 Kenya has confirmed the first case of corona virus.

Announcing the development, Health Cabinet Secretary Mutahi Kagwe said the patient, a Kenyan woman who had flown in from Ohio, USA, via London to Nairobi, tested positive Thursday.

Kagwe said she had been isolated at the Kenyatta National Hospital (KNH), Nairobi, and was in stable condition.

"The government has taken preventative measures and is monitoring the patient... who is stable," said Mr Kagwe.

He said the government was tracing all the people who had come into contact with the patient to contain the spread.

He directed that those coughing and have fever and difficulty in breathing should stay at home.

“What we have is a positive patient no more than that so there is no cause for alarm.”

Following the confirmation of the first case, the government has banned all public gatherings including religious jamborees locally known as “crusades” and interschool events as it monitors the situation.

“All religious crusades, gatherings, meetings interschool events and all events that of huge public nature have been suspended,” he ordered.

Kagwe, however, said normal services in churches and schools could go on provided hygiene is observed.

The CS also directed the public transport providers to immediately start providing hand sanitisers for their passengers and carry out regular cleanings on their vehicles to curb the spread.

“Public transports providers [are] directed to provide hand sanitisers for clients and regular cleaning for their vehicles to passengers.”

CS Kagwe said all travels have been suspended more so to the affected countries to curb the spread.

“Unless absolutely necessary, travelling to affected countries have been banned,” he said.

He said they had consulted with the Transport ministry and put measures in place to ensure safety of Kenyans travelling in PSV vehicles.

Also suspended is the visit to prisons for the next 30 days as the ministry monitors the situation.

Kagwe urged Kenyans to be cautious not to misuse social media to sptead misinformation about the disease.

“Kenyans must not misuse social media to spread misinformation that can cause fear,” he said.

He called for unity among Kenyans and urged everyone to take responsibility in dealing with the pandemic.

“We shouldn’t look at the government, Kenyans must take responsibility to curb the spread… like providing handwashing points,” he added.

On March 12, the Ministry of Health said it was ready to deal with coronavirus infections that may arise. Appearing before both the Senate and the National Assembly health committees, Mr Kagwe said a 300-bed ward has been set aside at the Kenyatta University Research and Referral Hospital.

He also added that an 11-bed isolation unit at the Kenyatta National Hospital and a 120-bed ward at the Mbagathi Hospital have also been prepared.

Some drugs and therapies have been recommended by experts and some drugs found to have the potential to defeat the novel coronavirus (covid-19).

Starting March 6, the Ministry of Health resorted to sending Coronavirus information via SMS.

A communication liaison officer from the Ministry, who requested anonymity, said the aim was to share as much information on the virus as possible in a fast way to reach the masses.

"People need to know what to do," the source said.

Bulk messaging may indeed reach the masses fast as the number of active mobile subscriptions in the country as at September 30, 2018, stood at 46.6 million, according to the Communications Authority of Kenya First Quarter Sector Statistics Report 2018-19.

Speaking to Standard Digital, Data and Telecoms expert Alex Gakuru said all situations need to be evaluated based on whether it's an emergency and if the information being sent out by the Ministry was well articulated.

Bulk messages that serve to calm the public or send out information fast should not be criticised, the telecoms expert adds.

"The message adds into the strategy to respond in the event that Coronavirus cases increase."

Coronavirus is fast gaining a footing in Africa, with the Democratic Republic of the Congo (DRC) reporting its first Covid-19 case on Tuesday. This makes the number of affected countries in Africa at least 12, Kenya being the latest addition and 116th globally.

DRC Minister for Health Eteni Longondo confirmed on March 12 that the first positive case of coronavirus was a person of foreign nationality, who arrived from Belgium and who was checked on his arrival to the African country.

Most of the cases in Africa involve foreigners or citizens returning from Europe.

The spread of the virus into the continent has seen some African governments take drastic measures to keep the virus out of their borders.

On March 6, the national government banned all conferences of international nature with more than 15 people for 30 days as a precautionary measure against coronavirus.

The move is part of the government's plan to improve preparedness through heightened surveillance.