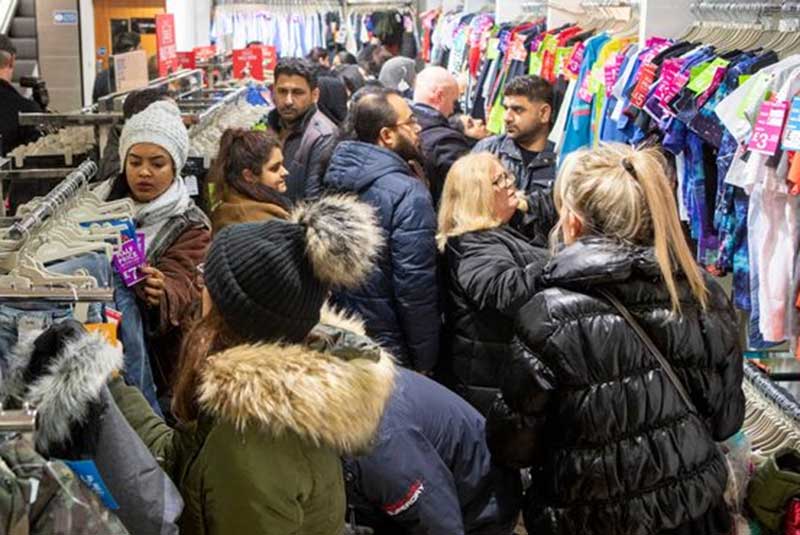 A Boxing Day shopping frenzy is under way across the UK, with thousands of Britons camping out or queuing from Christmas night to find a massive bargain.

Shoppers spent hours waiting for shops to open as early as 6am and then began raiding shelves and racks inside crowded stores where prices slashed by as much as 70 per cent.

Those heading out should bring their patience to deal with crowded stores, packed car parks and traffic jams.

Shoppers are expected to spend a record-breaking 610 billion shillings on Boxing Day sales, giving the UK's battered high streets a much-needed boost amid a sharp rise in online sales.

Almost 28million people are expected to buy something in stores or online after splashing out on Christmas gifts for loved ones - and possibly leaving their bank accounts bare.

Men are tipped to outspend women in the hunt for a bargain, and adults will spend an average of £188, a study suggests.

In Edinburgh, hundreds of people queued outside Next in Princes Street for its annual Boxing Day extravaganza before the lights were even on. 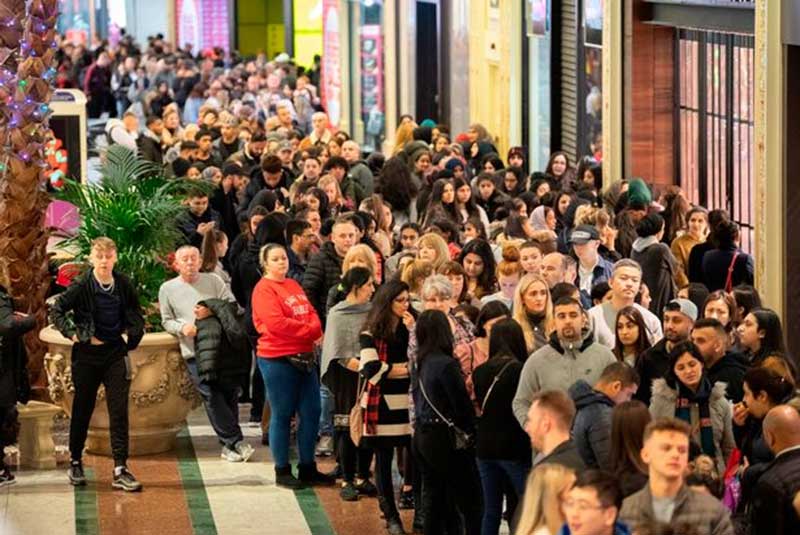 The shop was packed when it opened at 6am as bargain hunters took advantage of discounts of 50 per cent or more.

Some walked out with three or more bags filled with clothing or homewares and either headed home or went on to the next store.

In Nottingham, a group of women were the first to queue outside a Next shop inside the Intu Victoria Centre, showing up at 12.30am.

By the time the store opened, more than 400 people were in the queue, Nottinghamshire Live reported.

Amina Aziz, 24, who was the first in the queue with family members, said: “We wanted to be the first last year as well and came at 2.30am then. 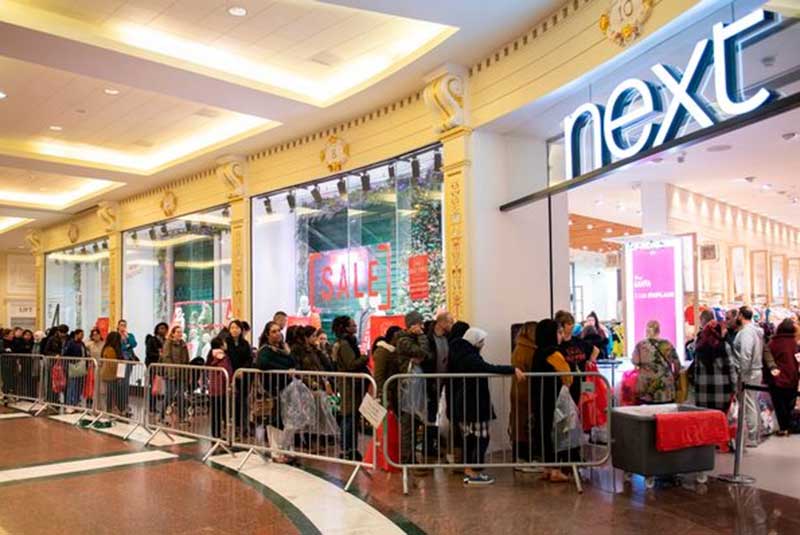 “We bring biscuits and we do not drink a lot because there are no toilets. We are all family so it is good company.”

There were similar scenes in cities including London, Manchester, Birmingham and Derby, where people began queuing outside shops at Intu Derby around midnight.

Shortly after a Next store opened at 6am, there were about 750 customers inside, said assistant store manager Kerry Pealing.

“We had to control people coming into and out of the store this morning.

Customer Jade Allison said it was a "nightmare" because it was so busy.

She added: “It’s very cheap but it’s annoying because it’s a nightmare in there. People push past you and ram straight though." 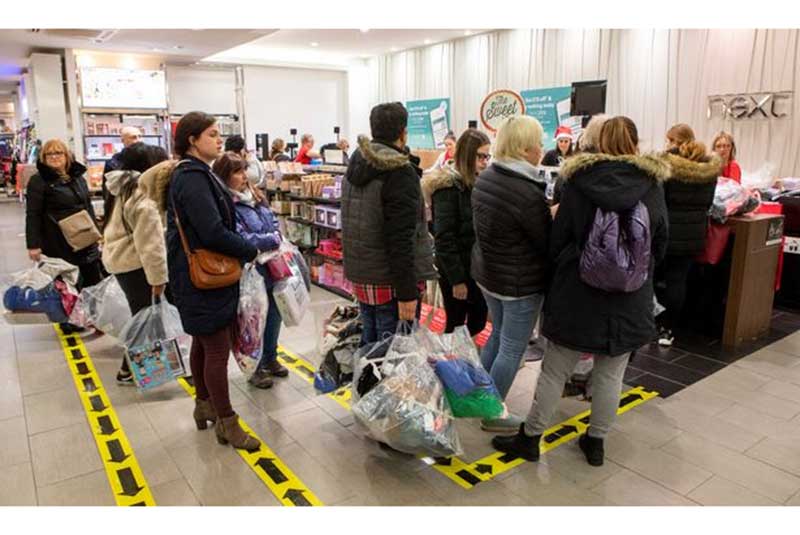 By 8am, there were huge crowds waiting to enter Selfridges at Manchester's Trafford Centre.

In London, thousands headed to Oxford Street - Europe's busiest shopping street - hours before shops opened to be among the first to bag a deal.

By 2am, queues had already formed outside some stores.

Half a million shoppers were expected in central London.

Jace Tyrrell, chief executive at New West End Company, representing businesses in Bond Street, Oxford Street and Regent Street, said: "Over half a million visitors expected in the West End today with sh. 6500m expected to go through the tills.

"Up to 70 per cent off as retailers pull out all the stops to clear as much stock as possible before the critical year end and Q1 costs come through." 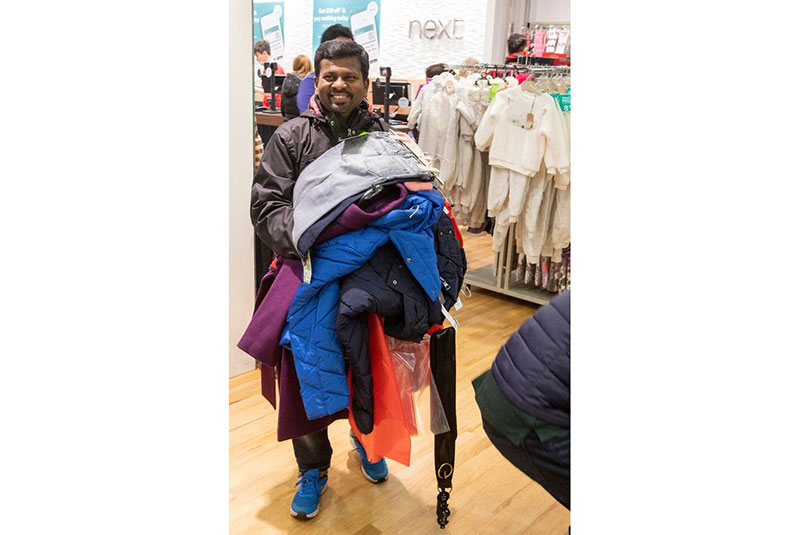 Boxing Day still remains a key shopping day - twice as much money was spent on Boxing Day than Black Friday last year - while the period between Christmas Day and New Year generated £12billion in sales, according to Shopper Trak.

High street retailers had already cut prices after trading on the busiest shopping day of the year, dubbed "Super Saturday", failed to lure shoppers to stores.

Clothing and accessories are at the top of Boxing Day shopping lists, with 40 per cent of customers looking for everything from coats and shoes to dresses and children's clothing for half price.

Stores and shopping centres are expected to get a lot busier through the day.

The Westfield shopping centres in London - in Shepherd's Bush and Stratford - were both expecting 400,000 shoppers on Boxing Day. 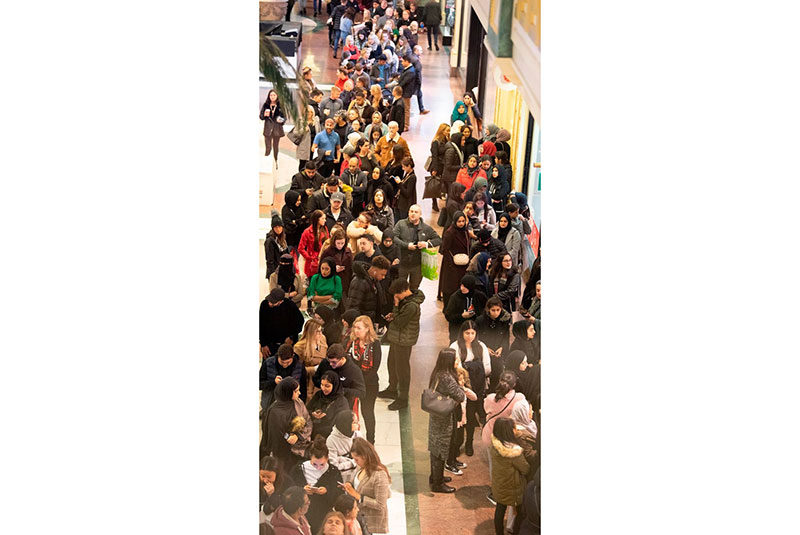 Mild weather is likely to encourage shoppers to head out, with double-digit temperatures expected in some places.

Others chose to avoid the crowds and take advantage of sales from the comfort of their own home.

Some shoppers admitted they would shop online and in stores on Wednesday. 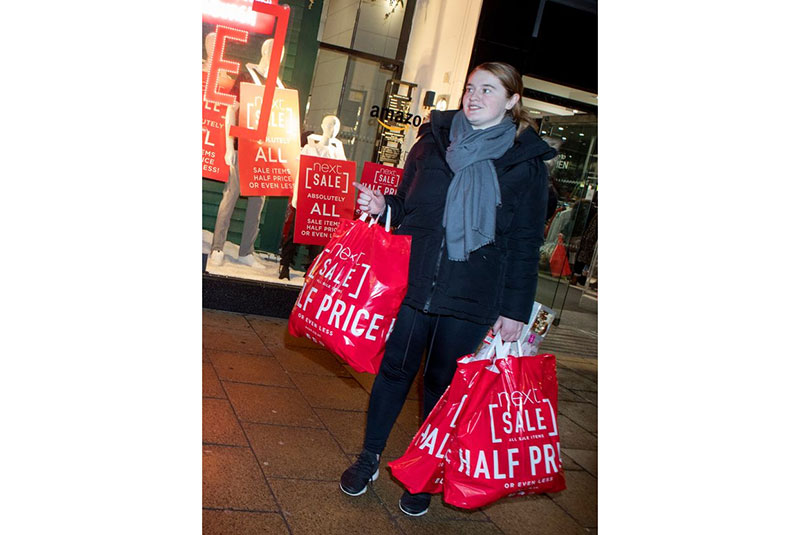 Jimmy New, of VoucherCodes.co.uk, told the Mirror: “Boxing Day continues to be a hugely popular savings day for the high street, with billions being spent on bargains.”

Figures from VoucherCodes.co.uk and Centre for Retail Research reveal 17.8million people will pack shopping centres today while 9.8million will snap up deals from the comfort of their homes.

A study by Barclaycard suggests men will outspend women in the hunt for a bargain.

Research shows that four in 10 adults plan to shop in the sales over the period, anticipating an average spend of sh. 24000 each.

Men will be the biggest spenders, with findings showing they expect to shell out 50 per cent more than women at sh. 29000 compared with sh. 19500.

Three in 10 Britons plan to hit the sales on Boxing Day, the study found. 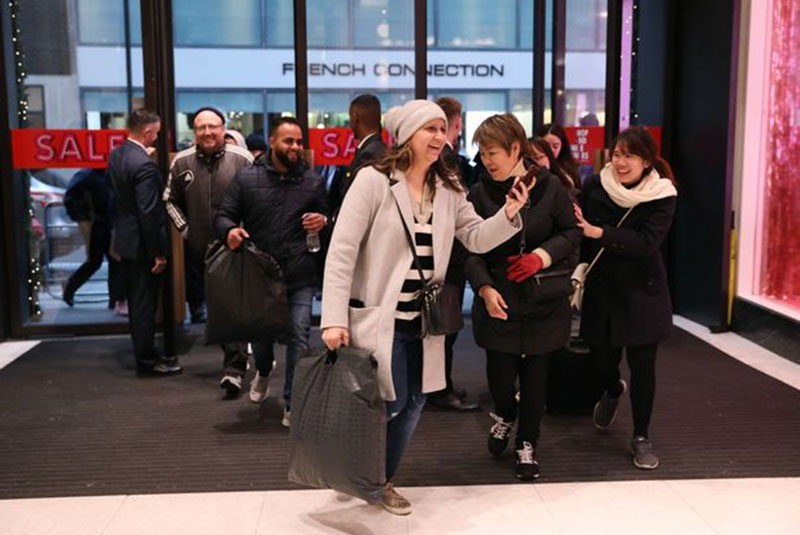 But more and more consumers were planning to start their sales shopping even earlier, with three in 10 bargain-hunters beginning their spree on Christmas Eve and 17 per cent on Christmas Day.

Of those Christmas Day shoppers, three in 10 said this is because of fear of missing out on a bargain.

John Lewis shoppers didn't have to wait until Boxing Day, with clearance having already started online at 5pm on Christmas Eve.

Argos started its sale on Christmas Day online, as it did last year.

Debenhams has been running significant sales before Christmas even arrived, with up to 50 per cent off on designer womenswear and beauty and fragrance.

While the high street will get a boost, online will again steal the show, Barclaycard said. 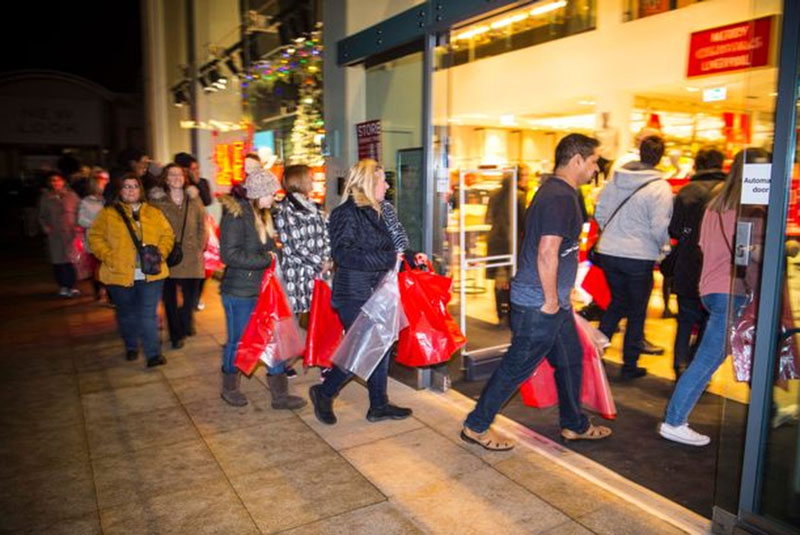 Four in five of those who plan to shop in the sales will do some online, with 69 per cent saying they will make the majority of their purchases online - up from 42 per cent in 2017.

Nearly a third of those who intend to shop online plan to use their smartphone or tablet to make a purchase.

Konrad Kelling, managing director of customer solutions at Barclaycard, said: "Whilst most plan to spend Boxing Day with friends and family, Brits also don't want to miss out on the best deals to be had.

"Surprisingly, men plan to spend more than women in the sales this year - whether that be staying up late to buy that must-have item or even browsing online during the family festivities."

He added: "Boxing Day remains the most popular day to shop for bargains over the Christmas period. 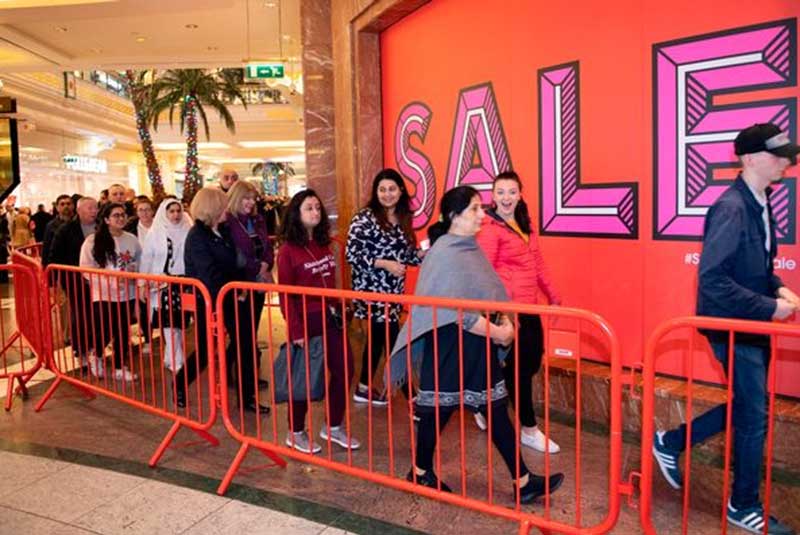 "However, this year the majority of consumers plan to shop online from the comfort and convenience of their own home rather than braving the winter weather and crowds on the high street."

It has been a torrid year for retailers with notable high street names such as Pound world and Maplin falling into administration, Marks & Spencer and Debenhams announcing plans to shutter stores, while super dry, Carpet right and Card Factory issued profit warnings.

If you got the chance to ask God one question, what would it be? 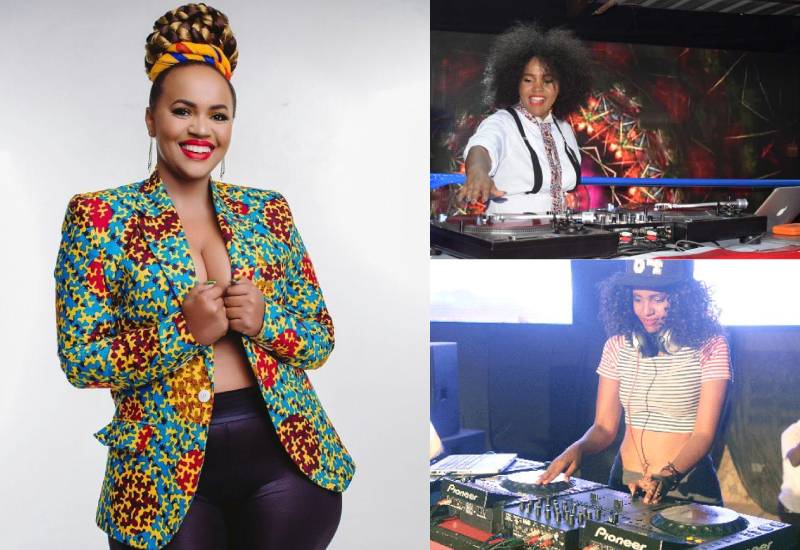