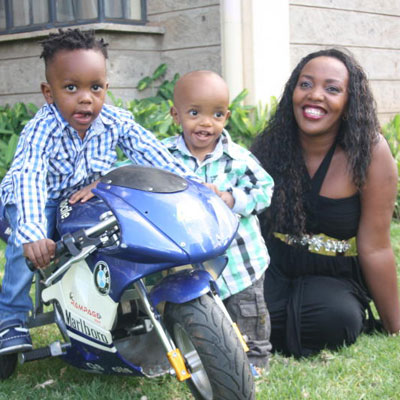 Even life as an orphan couldn’t compare to Cecilia Wairimu’s epic life after marriage. As a young woman, she had witnessed the ravages of life. And so when she met a man with immense interest in her, she believed the best was yet to come.

“I was just 24; young and naïve with dreams and illusions of a perfect family life,” she recalls. “We met at church; he showered me with love and attention. I fell for him and we courted for almost a year before getting married in 2000.”

Her wedding day was the happiest. Little did she know that she was ushering in a life of unprecedented ‘childless’ nightmares.

“The first year went by with no baby in sight. The second and third passed in similar fashion. I couldn’t get pregnant. I was distressed and didn’t know why I couldn’t bear a child like a normal woman.”

From the third year of marriage, Cecilia’s husband began battering her. She says he became hostile and soulless to her.

She noticed he had developed a penchant for single girls who could make ‘fertile’ wives. “I felt insecure and would ask why he interacted with other girls while he was a married man. He would answer back with thorough beating and verbal abuse,” she says.

She couldn’t tell when and why love had swooshed through the windows out of their marriage. She, however, suspected that her inability to conceive was the link to all her troubles.

Hopeful that he would change, Cecilia cowed at his beatings, praying that the sparkle of their early years together would reappear.

Without a baby, however, Cecilia could see peace light years away. So she visited a gynaecologist to ascertain the state of her reproductive organs. The test results came back and apart from a blocked fallopian tube, she was told she is just fine.

According to her doctor, Cecilia only needed a little hormonal boost to have a baby. He prescribed fertility enhancing drugs for her.

A year later, Cecilia still grappled with childlessness. She went back to her doctor, who recommended that even her husband be tested. Though reluctantly, he gave in after Cecilia persuaded him to take the test.

He was diagnosed with low sperm count and both were put under medication to increase their chances of conception. “Six months later, he stopped taking his medicine. He said he no longer wished to take the medicine. I suspected that his ego was on the line,” says Cecilia. “He continued beating and abusing me. Sometimes I left him when things heated up. He would apologise and beg that I go back, promising my pastors that he would never hit me again.”

But the beating got so bad that she went back home to her folks.

One time, she reminisces, an altercation ensued after her husband stalked her. She reported and he was reprimanded. Her mother-in-law came to the station where her son was being held much to Cecilia’s chagrin.

“She called me a barren woman not worth her salt; she told me I was not even a woman because I couldn’t give her son a baby. She warned me never to go close to her son,” recalls Cecilia.

That effectively ended their marriage. What began at the altar ended at a police station in a sea of bitterness. About eight months later, still drenched with embers of a failed marriage and the inability to have children, Cecilia met a former suitor that she had shunned prior to meeting her first husband.

“His marriage of six years – just like mine – had hit the rocks. We moved in together and began living as husband and wife.”

Two years down the line, however, there was still no baby and it seemed like the marriage had lived through its better days. History was repeating itself. When Cecilia suggested that they both go for checks, he declined saying he couldn’t be the problem having sired children with his first wife.

Nevertheless, Cecilia proceeded with medical check-ups. This time, the report came back looking grimmer than before. “I had fibroids and both of my tubes were blocked. He (doctor) recommended surgery to remove the growth in my womb and open my tubes. My husband refused to foot the bill and I couldn’t afford it on my own,” she narrates.

The marriage went from bad to worse when Cecilia discovered that the man had begun connubial visits back to his first wife. Further, he started a clandestine relationship with a different lady from Tanzania.

She also learnt that “his friends warned him against staying married to me. They told him I was a barren woman and my first marriage ended because I wasn’t a full woman. One time, I got a call that he had removed my stuff from our house and ferried them to my friend’s home. The marriage was over!”

Nine years had gone by but Cecilia’s thirst for a child was still with her despite going through two marriages. Her reservoir of energy for life had dissipated. The one-time church-loving girl had turned to a husk of the young and ambitious lady just before her first marriage. She no longer cared about marriage. She, however, was on a mission to get pregnant.

“I saved enough money to go for the operation. The fibroids had ceased in my womb but my tubes were still blocked. I went through the surgery and the doctor assured me that I could try for a baby,” she explains.

She met a former friend, Benson Karanja, who expressed interest in her. She bought a dozen pregnancy test kits in readiness for a ‘miracle’.

“I remember telling God that He had to give me a child before I used all the test kits,” she says.

Cecilia kept checking if she had a baby. The first three months the results came negative. On the fourth month she jumped with joy at the sight of two red lines. She describes the moment: “My body flushed with all the joy of my life.”

She kept it a secret for fear that it may have been a false positive. She kept away from the doctors lest they disappoint her with news that “I was not actually pregnant but something else was in there.”

It’s only after her baby bump was big enough (at seven months) that she called Benson to tell him that she was pregnant with their baby. It was also then that she went for her first antenatal visit.

Her son, Prince Kamau, was born in February, 2012. The couple conceived another baby while on vacation to China and named him China Lee Karanja who is now over a year old.

Cecilia and Benson have since formalised their marriage. At 38, she hopes for three more children before she pulls down the curtains on child bearing.

Last year, Cecilia founded Fertility Kenya, an NGO that seeks to lobby for ways ‘infertile’ women can be assisted to have children of their own.

“I wouldn’t wish bareness even on my worst enemy. Any woman who wants to hold her child in her arms should be given that chance. We have to find solutions to the stigma the society has placed on a woman being unable to bear children as well as the problem of infertility,” she says.

A professional event’s organiser, Cecilia runs ‘She’s Night out’ and ‘She’s Day out’, events she hopes to attract women and stakeholders who can help raise funds for her campaign against infertility.

She believes that barren women – just like she once was – can be offered a fair opportunity to have their own children.

By JACQUELINE MAHUGU | 20h ago