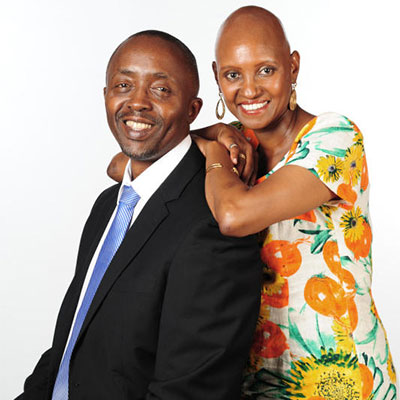 Five years ago, Wacango Muguro Kimani went to renew her passport at Nyayo House. A male supervisor attending to her was shocked to learn about her age when going through her personal information. Not hiding his astonishment, he asked her, “You mean you are that old!” She calmly responded to him, “but you are older than me,” to which the supervisor shot back; “men don’t grow old.”

“It was not a compliment because he was deriding older women. It made me wake up to the way society treats older women. Men are considered as leaders and elders when they grow older, while women are brushed aside as grannies with little to offer. As if growing up didn’t have its hurdles for women! Growing older can be challenging because people consider them less productive as they age,” says Wacango.

Her bald look has given her a younger face such that it is hard to believe Wacango Muguro Kimani is turning 51 this year. This is the look she had to embrace when she hit the age of 40 when she became menopausal.

The hair loss was something not new to her as her maternal family had gone through the same so she thought it had something to do with it. But when the hair loss followed with memory loss, fatigue, weight gain, and emotional lows, she resorted to research about it to learn that the discomforts were signs of menopause. Wacango had a hysterectomy when she was 37 years old, a reason for her nagging feeling about an ‘early’ menopause. It still caught her off guard when her gynaecologist confirmed her fears.

“Becoming menopausal at that age woke me up to having a healthy appreciation for life and aging. There were times things were very uncomfortable, for example breaking into excessive sweats in the most inappropriate times such as during a meeting, among other discomforts. I then focused on sorting myself out,” details Wacango.

Describing herself as a natural learner, she read and researched more. She sort refuge in acupuncture to reduce fatigue and lethargy, changed her eating habits, took lots of tea and vitamins to curb hot flashes, night sweats and deficiency in minerals and vitamins in her body. Hormonal Replacement Therapy (HRT)- that sought to relieve symptoms of menopause- helped with hot flashes, sweats, fatigue and insomnia. It was her hair loss challenge that she could not prevent. After taking pills, going for a natural look and going through a laser that failed, clearly going bald was the best option.

Her state did not dampen her spirits though. An adventurous woman, she had a solo bus trip across five countries: Gaborone, Botswana, Zimbabwe, Zambia to Tanzania. The mother of two sons says she had closed the chapter of having more children ten years before she reached menopause.
“Menopause is an inevitable phase in life. Important to take health seriously. The propensity to get diseases such as heart disease are increased if one does not pay attention.

Her experience motivated her to found The Fab50 Ladies Retreat. The retreat is normally an exciting weekend getaway for women in their 40s and 50s where women, professional and inspirational speakers talk all things health and sexuality, business, career and lifestyle.

Wacango says after discovering she had hit menopause earlier than she expected, she started searching for support forums where women shared their experiences and they went about them. A workshop on menopause she later on attended in South Africa, finally prompted her to have her own back in Kenya, called The Fab50 Ladies Retreat.

“I am an inclusive educator and as such, I look for different ways to provide information with the knowledge that no two people learn in the same way. So during the retreat in Naivasha, I made sure there were serious health topics that were presented in interesting ways. We also had fun. I believe that when people are engaged in uplifting and meaningful activities, they learn effectively,” notes the university tutor and trainer.

She adds: “The success of an event is what people do with the information and how different they are. So I have had many women send me messages saying how different they are because of the event. Some friends were sparked to revive business ideas, others have sought medical care for nagging menopause issues. One friend is taking a year abroad to do volunteer work and study. As an educator, it is humbling to promote lifelong learning and to know that I provided a platform for women to learn and grow.”

Wacango hopes to have the retreat biennial. She has also received requests to hold similar retreats in Kampala, Johannesburg, Cape Town and Durban. She plans to hold one-day workshops on the topics covered during the retreat, with the first workshop on financial planning beyond retirement, scheduled for the first quarter of 2015.

“There are career, legal and financial matters we need to consider in order to grow older healthy and fulfilled. Careers for many women plateau after they turn 50. This can be a challenge if one is not prepared for a slowing down. Women and men need to be realistic about growing older. Just like we planned and were often asked: “What will you do when you grow up, what will you study after high school”, we need to answer similar questions beyond 50,” she says.

The outgoing, adventurous, optimistic and creative woman got the support from her husband, Henry Kimanu, her two sons Cukia and Muguro and her sister, Susan Muguro with investors playing a hand in the success of the retreat.
“I hope Fab50 will energise women, help them to reinvent themselves and give them a launching pad for a bright future. Even though every woman will go through menopause, each woman’s journey is different. Some women experience very few discomforts, others will start as ‘late’ as the age of 60,” she points out.

Fashion and Beauty by Esther Muchene