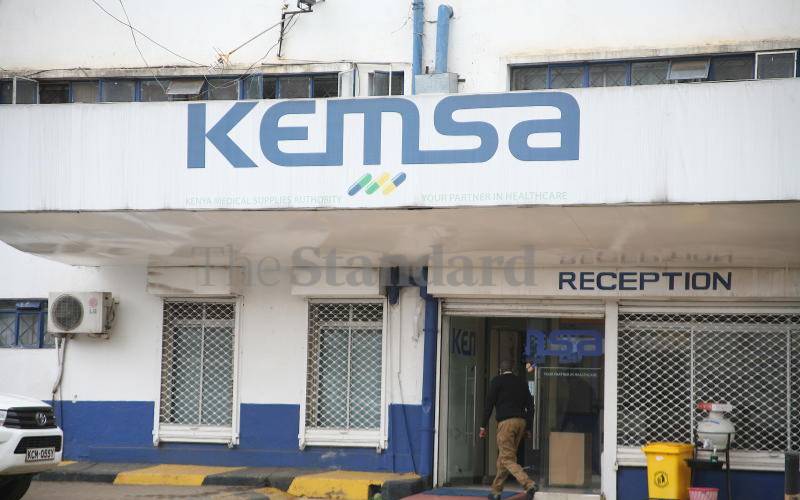 The Kenya Medical Supplies Authority (Kemsa) has told more than 900 employees to work from home.

Kemsa chair Mary Chao Mwadime yesterday said “all non-core staff members have been released to work from home as the necessary consultations progress” for the next 30 days.

The core operating teams, which were not specified, were appointed and mobilised for mobile operation “to avoid undue disruptions to service delivery and day to day operations,” she said.

She also said that the National Youth Service (NYS) and other government employees will oversee medical supplies across the country.

She maintained that the action is “a procedural formality to facilitate the review of the organisational structure” for the purpose of enhancing reforms to strengthen Universal Health Coverage (UHC) delivery.”

But sources at the Ministry of Health said the action was taken because of graft-related issues.

During the 30-day period, Mwadime said, attendant sensitivity and empathy will be maintained and “all the staff will be engaged and appraised” and given necessary counselling and psychological support.

Sources hinted that current employees have been asked to re-apply for their jobs as the authority will be manned by NYS and the military, awaiting the hiring of new staff.

Those expected to vacate the office include managers and their assistants, messengers, clerks, supervisors and subordinate staff including tea servers and cleaners.

The reorganisation of staffers has been attributed to corruption at Kemsa including the Covid-19 procurement saga where billions of shillings was allegedly misappropriated.

“The move to issue sacking letters has been triggered by donors who have been giving Kemsa a wide berth following the Covid-19 scandal. Donors are saying they need reforms at Kemsa,” added the source.

However, neither the Ministry of Heath nor the Cabinet Secretary have the mandate to sack employees according to the Kemsa Act.

In May, President Uhuru Kenyatta revoked the entire Kemsa board and made new appointments. This was after USAID failed to involve Kemsa in the procurement of Sh1.5 billion donor ARVs which were then being held at the Mombasa port.

Health Cabinet Secretary Mutahi Kagwe told the Health Committee that Kemsa was being restructured to win trust for it to continue handling importation of medicines and “hopefully this is something we're going to finalise as quickly as possible, and you will begin to see movement in these areas in the next few days.”

In June, the International Monetary Fund (IMF), directed the government to reveal beneficiaries of the Sh7.8 billion Covid-19 scandal, failure to which, IMF would stall ongoing Sh256 billion programmes in Kenya.

Further, IMF asked for speedy investigation and prosecution of those involved in the scandal.

The institution said though information on awarded contracts and beneficial ownership of companies was published by Kemsa, the same was not placed on Public Procurement Information Portal, for access by the public.

In the letter copied to the Departmental Committee on Health, the CS was asked to ensure only those involved in scandals at Kemsa are sent home.

But according to Mwadime, the entity’s reform efforts have been stepped up to position it as an effective player in the healthcare system.

Mwadime said that in July, a multi-agency task force was established to provide an independent operating recovery strategy and facilitate organisational effectiveness.

According to the board chair, the committee completed the role and provided a detailed report, which revealed client dissatisfaction.