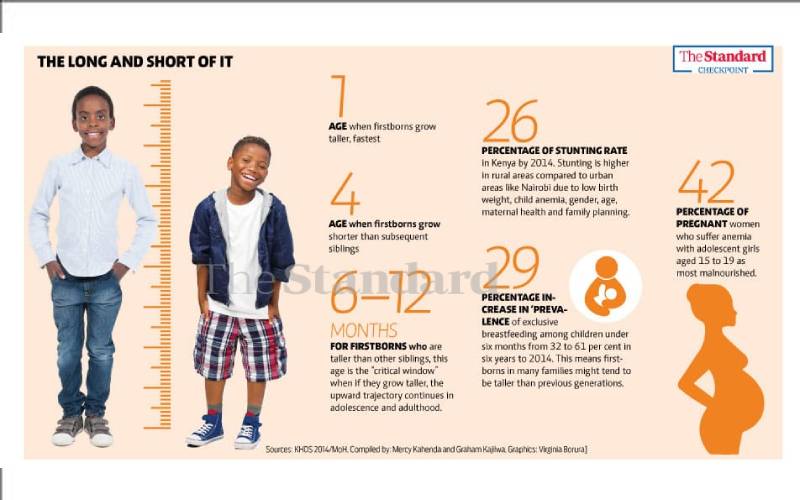 The firstborn is naturally expected to be the tallest of the siblings to cement –physically –that they are the eldest. But this is not always the case, on average. In most cases, firstborns hold the short end of the stick, height-wise.

They also spot smaller body sizes than other siblings, a deviation that starts from the age of four.

One reason most firstborns, on average, are shorter, is nutrition, particularly breast feeding, whose inadequacy causes stunted growth. Most firstborns, being a mother’s first mothering challenge, have poor breastfeeding habits. That the breast milk is sometimes in short supply does not help matters. This deficiency spills over to other dietary habits and cumulatively this leads to stunted growth.

Beatrice Okere, a nutritionist, says ‘shortness of height” can be out of genetics and hormone deficiency, but in case of malnutrition, stunted growth can happen during gestation period or after birth.

Okere explains that sometimes the child is well breastfed, but the mother is malnourished. “We do not expect them to get sufficient nutrients, and the mothers’ complementary feeding as she weans the baby from breast milk, also will not be sufficient since if she does not have enough to eat, its means there is not enough as well for the child.”

And though most tended to show “substantial catch-up growth within the first year of life, such that they were already significantly taller than later-borns by one year of age,” notes the study published by the American Journal of Epidemiology, most still remained shorter in adulthood.

Christine Kihara, nutritional coordinator in Nakuru County, explains that breast milk is a key diet in children, as it contains all nutritional components, which should be supplemented with complimentary diet at six months to give a baby energy within 1,000 days. “For vegetarians, they should eat meals with amino acids like beans,” she said.

Virginia Wanjiku, a clinical nutritionist at Kenyatta National Hospital (KNH), attributes stunted growth among firstborns to poor diet during pregnancy, like ignorance on importance of fortified flour in the market, to boost nutrients.

Wanjiku explains that most first time mothers are aged between 16 and 21, an age bracket that hardly understands dietary procedures and the importance of antenatal care.

“A number of first time mothers conceive while still students, where they hide the pregnancy. Some are married off at an early age that makes them not easily attend prenatal clinics, where they are educated on a balanced diet that helps in development and growth of babies,” says Wanjiku, former head of maternal infant and child nutrition at KNH.

“Most firstborns are not planned for,” she reckons, adding: “they just happen, and due to lack of proper feeding results in nutrition issues, and when a mother does not take foods rich in nutrients for development of the neuron, they develop neurotubules, including in the brain and spine”.

Children who miss out on folic acid (which provide vitamin B9 found in certain fruits, vegetables and nuts) risk developing health complications like spinal bifida (spinal defect), hydrocephalus (fluid in the brain) and cleft lip.

Wanjiku warns that such complications are hard to reverse once formed three months after conception, as the spine and brain are already formed.

Today, the government offers free folic acids and iron supplements to pregnant women, which are given during antenatal visits, and which some first-time mothers miss out on. Others default after developing symptoms like nausea, bloody or brownish stools and vomiting.

“Stunting happens from the time a woman is pregnant,” says Wanjiku. “This is within the first 1,000 days from conception to two years. It is a period of pregnancy, and six months, where the child gets exclusive breastfeeding and 23 months.”

And the figures in Kenya are instructive: In 2014, only 32 per cent of Kenyan children were being breastfed exclusively during their first six months. Their consequent diets, which complemented breast milk, were also of low quality, according to the 2011 National Food and Nutrition Security Policy Implementation Framework. 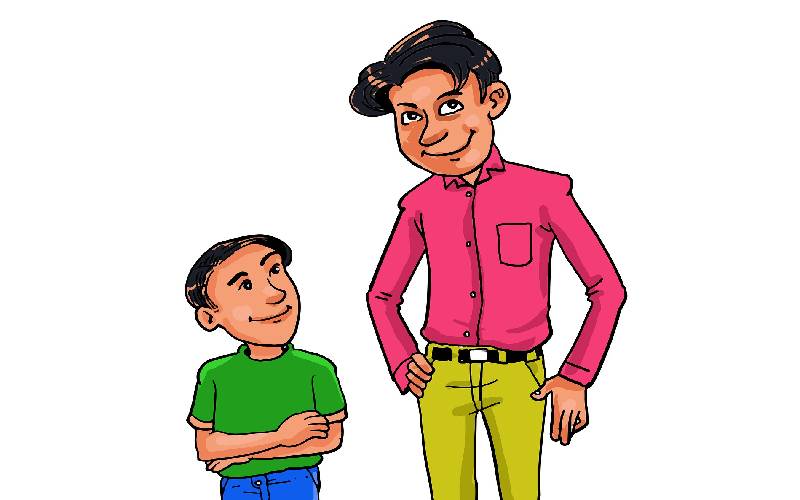 The 2014 Kenya Demographic and Health Survey (KDHS) report indicates that, nationally, 25 per cent of children aged below five years are stunted. The attributing factors, according to the survey, are poverty, diseases and household resource constraints.

“The impact of acute malnutrition in early life has irreversible lifelong damages. A malnourished child is less able to fight off illness, cannot thrive, often ends up with poor cognitive development and is physically stunted,” notes the 2017-2022 National Food and Nutrition Security Policy Implementation Framework.

It adds: “About 50 per cent of cases of under-nutrition and 25 per cent of stunting cases are tied to chronic diarrhea, intestinal worms, and other diseases that are linked to poor water, sanitation and hygiene.”

Wanjiku argues that secondborns and subsequent siblings tend to be taller and stronger, as then mothers are keener on diet and value antenatal care.

The worst thing is that stunted growth cannot be corrected, unlike being underweight, which can be surmounted via supplements.

“If a child is born stunted, they will remain stunted for the rest of their lives. If there was a problem during conception, and such was not given attention at 23 months, they cannot be corrected later in life,” Wanjiku says.

Besides, failure to attend antenatal clinics, the other mistakes first-time mothers make, is being guided by “their peers from social media sites because of influencers,” says Wanjiku, warning that the bulk of social media information on pregnancy and child care is usually misleading.

Then there is the influence of the mother-in-law on how their grandchildren are to be fed, and who they insist on feeding mostly what they fed their own children. At times they stay with daughters-in-laws during and after pregnancy.

In some communities, pregnant women are discouraged from eating eggs, denying mother and baby a high source of protein. Eggs are said to balloon the mother, leading to delivery through C-Section. This results in malnourished firstborns.

Breast milk, she said, is a key diet in children, as contains all nutritional components, which should be supplemented with complimentary diet at six months, to give a baby energy.

“Mothers must be keen on what they feed their children within 1,000 days. For vegetarian, they should eat meals with amino acids like beans,” says Kihara.

However, poor nutrition alone does not fully explain why most firstborns are shorter. Nutritionist Okere says some suffer a syndrome called short stature, which is a child or teenager shorter than peers of same age.

Okere says that while there are tall, short and average people, short stature is the kind where “your height is not the same as those in that age group...they will be three or five per cent shorter.”

“If a child has been going for clinics, then the caregivers will be able to pick it up because there are certain heights you expect a 13-year-old to be, then you find they are shorter, almost looking like a five year old,” says Okere, adding that there could also be short people in the family, which means “maybe there is a genetic issue, hormone deficiency of malnutrition issues.”

Okere also mentions celiac disease, which she says is very rare, but can also cause short stature. “Or if someone has a growth hormone deficiency, you will see a child who has such a baby face for their age... like they are seven but look like a three-year-old, or a teenager who looks like an eight-year-old,” she explains.

There are several disadvantages to being the eldest but vertically challenged. Take Magdalene Wanjiku, 20, from Langalanga Estate in Nakuru County, for example. Compared to her three siblings, Wanjiku resembles a doll, for which she has suffered discrimination from her siblings who began stamping authority as they grew taller.

That “my younger siblings are more talkative” does not make matters better for Wanjiku during family gatherings, since “as a short elder child, I receive a cold treatment… just because I am shorter”.

Loise Wanjiru, a media practitioner and mother of twins with differing verticals, says height should not be a determinant for intelligence or authority, and that parents should make all their children feel great, irrespective of their birth orders, failure to which sibling rivalries are unavoidable.

Wanjiru, from Moi Flats Estate in Nakuru, has also observed that children with lighter complexion feel prettier and superior to siblings of darker complexion, and “there is need to equalise children according to their strengths and weaknesses. A parent should make sure that none of his/her children feels superior to the other, regardless of position, size, colour, height, talent or academic performance.”

Wanjiru’s secondborn, for instance, is taller and more aggressive, talkative and performed better in academics, compared to the firstborn, who is shorter. At home, the taller daughter acts as a team leader.

To avoid sibling rivalry, Wanjiru affirms how both are bright and have a brighter future, besides assigning the shorter twin financial and speaking roles.

The cancer develops in a hollow bubble, unlike breast cancer, which can be felt.

By CHEBET BIRIR | 5h ago

By PATRICK VIDIJA | 19h ago