Inside the rot ailing Nairobi Hospital 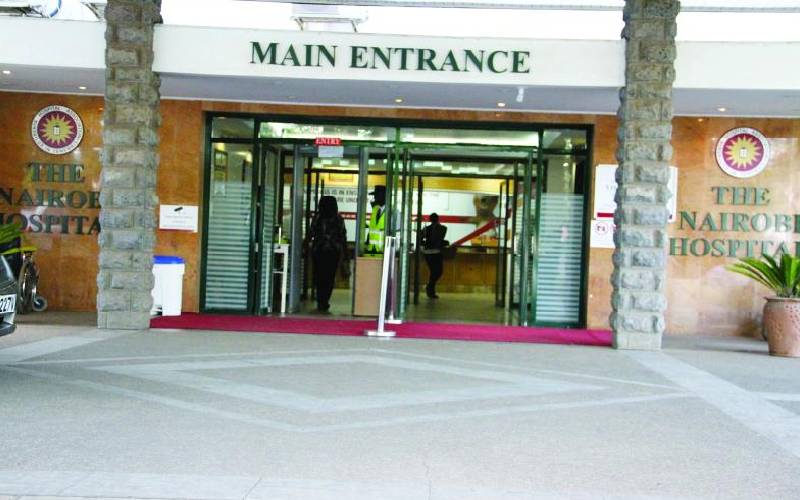 Questionable integrity and wobbly management structures and systems are the highlights of an audit that lays bare what ails one of Kenya’s high-end hospitals.

The forensic audit on The Nairobi Hospital by Grant Thornton -- covering January to December 2019 -- details major lapses in procurement, finance, personnel management, projects and ICT systems that could have cost the hospital Sh2 billion in 2019.

Done in March 2020 as the now embattled CEO Allan Pamba took over the hot seat, the aftermath of it has seen 16 members of staff let go following what was seen as a clean-up of the hospital’s top-level management with an aim of keeping the facility’s glory.

The audit, which is the third such forensic reports on the hospital, covers work done by a previous board and the then acting CEO who have since left the hospital.

“The hospital gets an average of Sh1.2 billion every month,” says one of the former staff members who sought anonymity because a separation agreement they signed upon exiting the hospital bars them from commenting about the hospital in public.

Despite this, the hospital at the time of audit owed vendors more than Sh1 billion due to what the senior accountant said was caused by lack of funds. Some of the payments had been outstanding for more than 100 days.

Doctors’ billings at the time of the audit amounted to Sh1.9 billion, amounts owed to them by the hospital and insurance companies and corporates, bringing the cumulative total to Sh3.7 billion since November 2016, of which Sh1.709 billion had been paid.

At the time of audit, the hospital owed doctors Sh46.2 million, while insurance and corporates owed Sh1.057 billion. Management, in a board meeting in February, had tabled a paper to write off Sh57 million that insurance companies had declined to pay.

These payments were up to Sh1.7 billion, Sh1.5 billion of which is to be paid by insurance companies.

While money seems to be at the centre of the tumultuous governance and management systems at the hospital, sources privy to the most recent audit report say that some of the things raised by the auditors are being implemented and the rest is “work in progress”. The release of the 2019 forensic audit report to the media is seen by some former staff and board members as a diversionary tactic, because they say the report has been around for some time and, it might be to divert attention from the current questions bedeviling the hospital.

A letter to the shareholders by current chairman Dr Irungu Ndirangu (Mjr Rtd), says “the audit report was necessitated by the need to understand the hospital’s operations and confirm its current challenges.”

He assured the shareholders that the board was in the process of implementing the report.

One of the items that were of concern was a high-level exposure of the hospital’s systems which, at the time, could be accessed through the guest WiFi, an indication of how vulnerable the hospital and its data was to hackers if they had attempted to penetrate the premiere hospital.

“There is no network segmentation evidenced on the Local Area or Wide Area Network and as such, basic access to guest WiFi network allows access to hospital mission critical systems such as Kranium and Navision that are on the network. The two are being used by the hospital to manage the financial issues internally,” the report reads in part.

A former staffer well versed with the IT system questioned the fact that the hospital has two IT systems which he says “do not speak to each other”, and at times reconciling the stock in one system versus the revenue on the other system is problematic. Due to this, insurance companies are unable to pay the hospital without proper reconciliations. The two systems, according to the report, had a difference of Sh161 million in the summary of billings in 2019. Further, there was a Sh71 million difference in the summary of receipting.

“There is the risk of material misstatements during financial reporting and regulatory penalties and loss of confidence by the public may arise as a result due to the use of a system that is not reliable. In addition, this can lead to poor decision-making by management on critical matters on hospital operations,” the report says on these differences.

One of the systems had duplicate user accounts. Auditors could not ascertain whether they were being used simultaneously to carry out transactions in the system.

Sh164 million worth of items procured had not been delivered to the hospital, reasons given ranging from brands or items being out of stock, inaccuracies in shipment dates, incomplete installation, partial deliveries to blanket orders being issued.

In one instance where two dental chairs worth Sh6.3 million each were delivered, they were not in use because they lacked key consumables to operationalise them. Anderson bed lift and ramp acquired at Sh121 million was also not operational because the engineer informed the auditors that it had not been handed over to the hospital by the contractor.

The loopholes in hospital’s procurement processes and systems were laid bare in several instances in the report.

In an incident, a procurement manager allowed a suspended company to continue trading with the hospital despite not being able to deliver a dialysis treatment plant at a cost of Sh12.9 million.

In another incident, the hospital incurred $507,504 (Sh50.7 million) in wrongful termination of services for a supplier due to what is stated as the Ag CEO not seeking legal input before the termination. In addition, it lost another $779,72.05 (Sh77.9 million) from termination of another supplier’s services.

The hospitals legal expenses were significantly on the upward trajectory, increasing by 35 per cent from Sh20,424,000 to Sh39,952,000. The auditors termed it a clear indication of inadequate legal advice to the board and management of the hospital.

The projects under The Nairobi Hospital had an additional Sh630 million from change orders not approved by the hospital, varying the initial contract amounts.

“We reviewed board minutes between period 2017 and 2019 and noted that change orders were never discussed except for 4th Finance and Investment Committee,” read the report.

From the report, it is not very clear whether pay grades and salary scales at the hospital were being followed to the letter.

“Many top-level managements at the time were in acting capacity for many months, contrary to best practice,” said the former staffer.

From the report, seven senior management positions, including that of the CEO, Finance and Human Resource directors were all acting in office.

Staff privy to wrangles at the hospital say there is an ongoing audit to right-size the organisation and create a rational salary structure.

“We have to stick by proper governance norms. There is a heavy top-down system where the board is not fully informed of what is going on,” says Robert Shaw, a current board member.

“Board members are not provided with enough information to make decisions. The hospital’s core business (providing health services) is in good shape but its governance is wobbly,” adds Shaw.

He says there seems to be a thin line between top-level management and board governance, where the board is involved in the day-to-day operations of the hospital to the extent of supervising contractors.

“With all this turmoil, will it continue providing premiere medical services?” Shaw asks, noting that it’s an open question but that the situation is not all doom and gloom because of the goodwill of board members who want to do the right thing.

Couple: We beat stigma and now live positively
Health & Science - By Titus Too