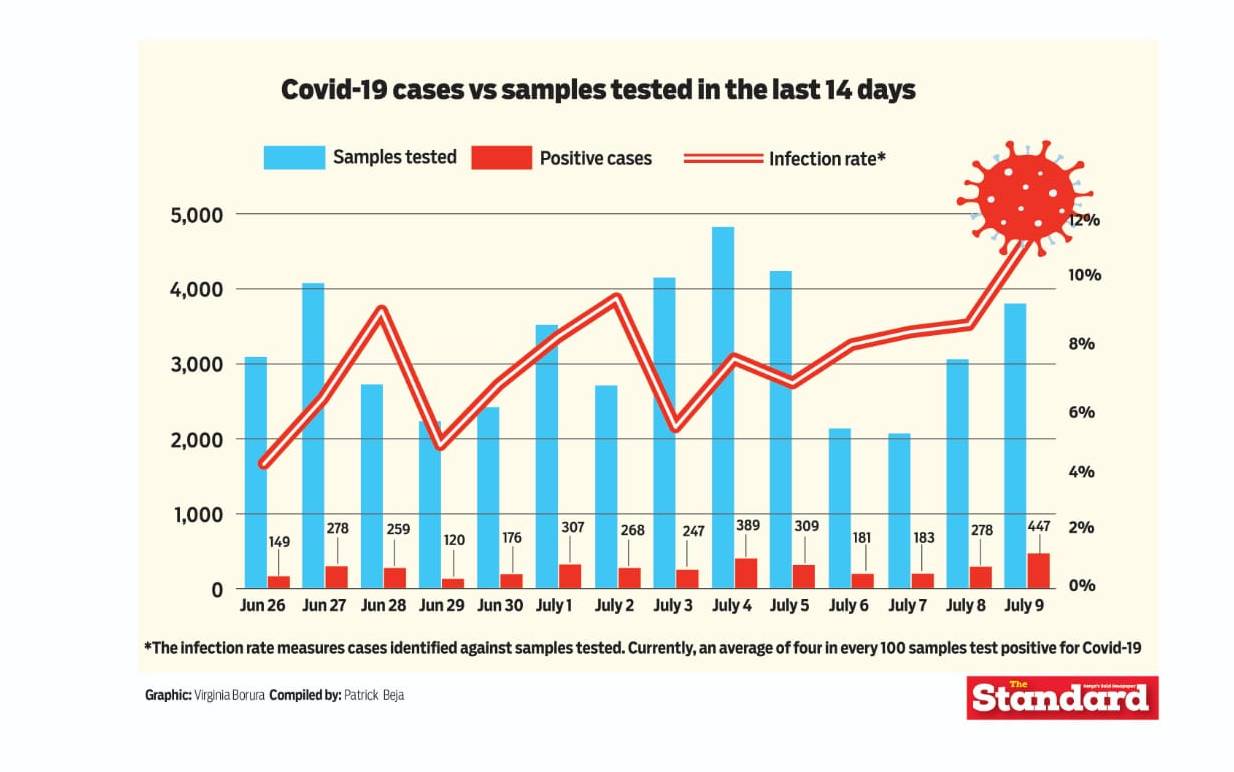 Health Cabinet Secretary Mutahi Kagwe said the responsibility to stem an inevitable surge rests with Kenyans themselves, urging citizens to wear masks, maintain social distance and observe other approved safety protocols. He also said county governments must have the capacity to test and treat new patients.

The Ministry of Health announced 447 positive cases in 24 hours while 40 people were battling the virus in the intensive care unit across the country.

Yesterday’s figures were the highest so far, with Mr Kagwe warning that, the country could expect a similar trend or even higher (infections) in the coming days.

Addressing a press conference at the Coast General Teaching and Referral Hospital, Kagwe said the latest number of positive cases was from 3,803 tested samples.

“We expected the coronavirus figures to go up. That is why we have been pushing for expansion of capacity in the counties to manage the situation,” he said.

Some 280 of those who tested positive today were male while 167 were female. They included a one-year-old child and an 88-year-old person. Mombasa County recorded 14 new cases of the virus.

The CS announced that four people had succumbed to the virus while 64 people had been discharged from the hospital. The total number of deaths from the virus now stands at 173, while the number of recoveries is at 2,657. Mombasa has so far recorded 738 recoveries.

Kagwe, who was flanked by Mombasa deputy governor William Kingi, Health Chief Administrative Secretary Mercy Mwangangi and Health Director-General Patrick Amoth, warned that the expected influx of visitors once the airspace is opened on August 1 could lead to a spike in Covid-19 cases in the country.

The CS announced that Sh3.4 billion in allowances for health workers was ready for dispatch, and commended them for saving lives. He told Kenyans to protect themselves and their loved ones against Covid-19 now that the lockdown in Mombasa and Nairobi had been lifted.

“Only you can stop the spread of this virus. The responsibility has shifted to us individually. You should protect yourselves by keeping distance even when chewing miraa. Avoid over loaded matatus and gatherings,” he warned.

He noted the night curfew was still on and that bar operators should continue to keep their establishments closed.