Coronavirus cases in Kenya jump to 81 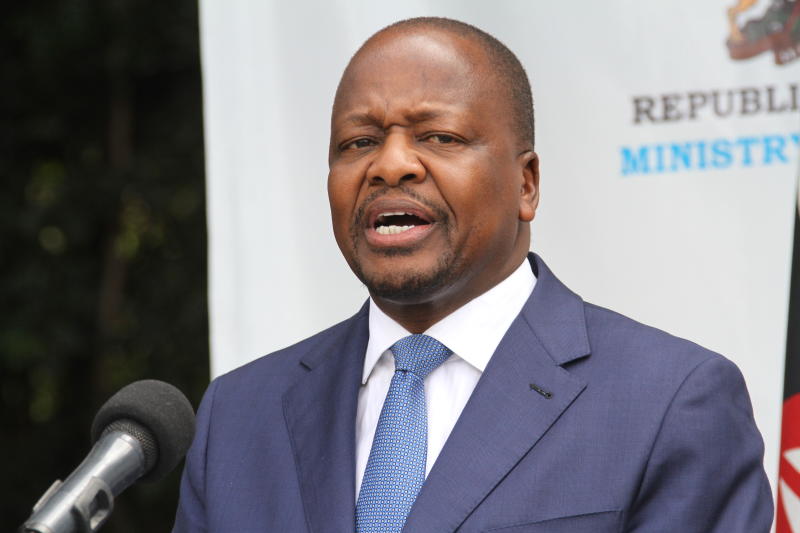 Announcing the latest update, the Health CS Mutahi Kagwe (pictured) said in the past 24 hours, the country had tested 300 people, the largest number ever.

Of those, CS Kagwe said 21 were already in quarantine, adding that they were fortunate to have captured the cases early enough.

In the latest report, Mombasa reported seven cases and Kiambu two while Kakamega, Kilifi, Machakos, Muranga, Nairobi and Nyamira each reported one each.

Out of the 22 cases, two are Pakistanis and two others Cameroon nationals and the rest are Kenyans.

Kagwe said there were still sceptics who think the disease is not yet in Kenya.

“The disease is spreading very first. It knows no boundaries. We are all affected in the same way,” Kagwe said adding that people should quarantine themselves if they feel unwell or if they had travelled into the country recently.

“In just 24 hours, 810 Italians have died, 812 people from Spain passed on. What this tells us is we cannot emphasise enough what is likely ahead of us unless we adhere to the rules we’ve put in place,” he warned.

The sudden surge in the number of infections comes as Kenya reported two recovery cases.

On Wednesday, the Ministry of Health announced that Kenya’s first and third Covid-19 patients have fully recovered.

The patients, Brenda and Brian, earlier today talked to President Uhuru Kenyatta about their recovery journey.

President Uhuru praised Brenda for her courage in recognising that she had a responsibility not just to herself but to the country too.

“Immediately upon her arrival, Brenda took it upon herself, that she potentially had the risk to harm others around her, to go to hospital,” President Uhuru said.

By doing so, the government was able to confirm and trace others she had come into contact with. “You are a very brave person Brenda and we celebrate you,” he added.

The country so far has reported three full recoveries and one death.

Health CAS Dr Mercy Mwangangi said that the government would use public boarding schools as isolation centres for testing and treating coronavirus patients should the situation worsen.

She also said that the national government in consultation with the county governments would hire 1000 medics to bolster the current number.

“Currently, we are working to increase testing capacity by opening more centres countrywide to fasten the process.”

The coronavirus is now being spread through community transmission which calls for more personal responsibility among Kenyans in the fight against the disease.

A dusk-to-dawn curfew, declared on Friday, is in place in an attempt to check the spread of the virus but politicians have voiced concern over overzealous enforcement after police were captured on camera bludgeoning people.

By Saada Hassan Oct. 2, 2022
Politicians come and go, but not oceans