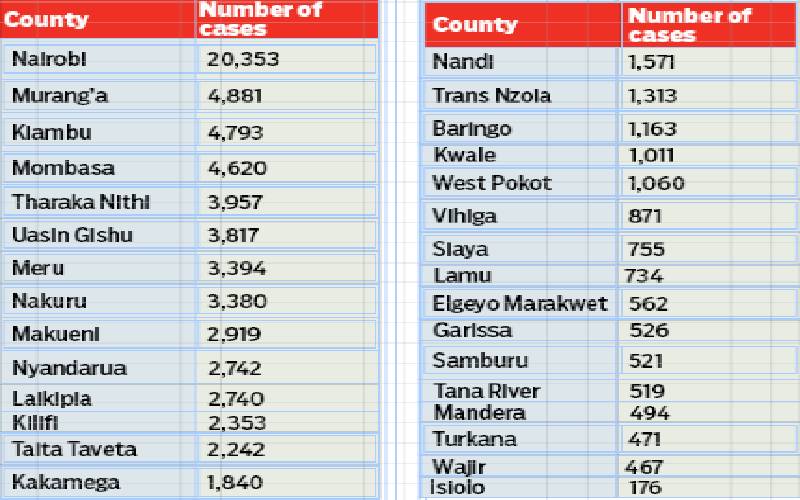 Nairobi was the leading county in persons with mental disorders in 2018, a survey has revealed.

The survey released by the Kenya National Bureau of Statistics (KNBS) in December shows there were 104,615 cases of mental illnesses reported in hospitals across the country.

Nairobi reported 20,353 cases of hospital visits as a result of mental disorders. Of these, 18,846 were individuals aged above five years, the highest number among the 47 counties.

The big number in Nairobi can be explained by the existence of the main referral facility in the county - Mathari Hospital - that offers mental health treatment.

While Nairobi had the most cases among adults (age five and above), Mombasa led among children below age five.

The statistics show that there were 3,417 cases of mental disorders among children below five reported across facilities in Mombasa.

This was followed by Nairobi with 1,507, Kajiado 1,155, and Kiambu 811. Marsabit and Isiolo are the counties which had least cases of below five years with 15 and 16 respectively.

Behaviour disorders, autism, anxiety disorder and Attention Deficit and Hyperactivity Disorders(ADHD) are some of the mental illnesses that affect children, according to the Centre for Disease Control and Prevention.

Dr Mercy Karanja, a consultant psychiatrist who spoke at an earlier mental health gathering, said that early signs of a mental illness in a child include nightmares, sad mood or decline in performance.

“You will see a child missing school or starts wetting bed something they have not been doing; all these are signs that we most times miss,” Dr Kranja explained.

Dr Boniface Chitayi, a psychiatrist based at Mwai Kibaki Teaching and Referral Hospital, said while autism does affect cognitive skills just like other mental disorders among children, the symptoms can reduce as the child advances in age.

“If it is mild, then it can even bring out a talent the child has,” he explained.

By DAVID GITHANGA | 22h ago