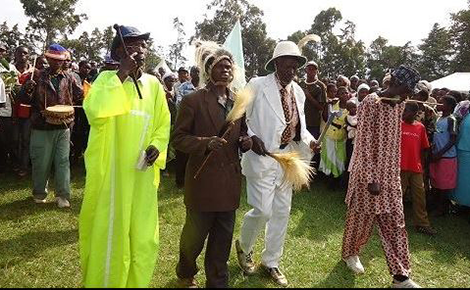 Bungoma, Kenya: Every person, village, location, County in Kenya, have their pride, a belonging and are associated to what they believe, trust and invested in heavily.

There are such pride as forests, wild game, hills, waterfalls, game parks, mountains, industries, schools, churches, mosques among others that every individual, region take pride in. County Governments are therefore needed to fully support such cultural activities and institutions for the benefit of locals which can in turn initiate unity in communities.

They are proud of St. Walumoli Musambwa Israeli Primary School, the only school in Kenya that is sponsored by the Dini Ya Musambwa.

The school was named after Mr. Joash Walumoli who was a famous leader and saint in the Dini ya Musambwa religion.

In the past, Dini ya Musambwa was known for other reasons but with time, members of the religion have diversified their activities to include promoting education by establishing schools.

Initially, schools were established by District Education Boards (DEB), Catholic Church, Protestant churches and other private agencies but the Dini ya Musambwa has not been left behind in matters of establishing and sponsoring schools.

The school was started in the year 2007 on a ½ acre land in Sichei sub location, Sichei location. The school was registered on June 13, 2011 and up to now 3 Teachers Service Commission teachers have been posted to the school, a move that makes Musambwa people appreciate the government for its support.

Mr. David Mukhali Kitayi is the Head Teacher while Mr. Patrick Nyongesa Njibwakale is the Deputy Head Teacher of the school. The school has a total of 7 teachers, 4 of them have been brought by the Parents Teachers Association and the remaining 3 are Teachers Service Commission employees.

The school admits pupils from all religious backgrounds and currently the school has a population of more than 200 pupils from pre-primary class to class four.

The head teacher said that he is expecting government funding now that the school is registered and has TSC teachers.

He however noted that the school has not benefitted from CDF and LATF money but he is liaising with the Sirisia CDF office among other education stakeholders in the region to ensure the school is funded.

The PTA chairperson, Mr. Paul Wamalwa Mwanda, who was also present at the school, said the school is growing rapidly despite usual challenges.

Mr. Wamalwa also acknowledged the sponsor of the school for its tireless efforts to ensure the school’s growth.

“The quality of education being offered here is the same as the one being taught in any primary school in Kenya as we follow the same curriculum,” said the deputy head teacher.

“The school is like any other of the six different schools that I have taught since I was employed by the TSC,” he added.

Mr. Moses Simiyu, a retired teacher, was the first head teacher who led the school before it was registered.

“I was the first Head Teacher when the school was started before handing over the school to TSC teachers who were sent by the government, I would like to commend the school for it has really improved,” said Mr. Simiyu.

He called upon elites in the area to support the school fully as the school is a resource to the whole community.

Wangila wa Mtoto is a follower of Dini ya Musambwa who represented the sponsor during a visit to the school.

Wangila said Musambwa followers and teachers teaching at the institution have been facing ridicule from villagers.

Joseph Munyelele, an elderly member of Musambwa, urged community members to establish more institutions in the region in the name of Musambwa to offer education, medical services, among other services.

“Establish schools, hospitals and other social amenities in the name of Musambwa,” said Munyelele.

In the past, children of Dini Ya Musambwa followers studying in missionary schools and trained teachers following the religion were expelled.

Musambwa was the traditional way of worship among a section of the Bukusu people and was used as a tool to resist the colonial rule in Kenya, therefore there is no need to despise it, an opinion held by its followers.

The religion is said to have been founded around 1936 by Joash Walumoli, one Wekuke, Israeli Khaoya and Elijah Wa Nameme who was their spokesperson who agitated vigorously for its recognition.

On several occasions, Bungoma County Governor Kenneth Lusaka has promised to develop cultural centres and honour heroes/heroines in the county.

Previous article
Kenyans told to exercise caution Covid pandemic is far from over
Next article
Political will needed to act on climate change
.