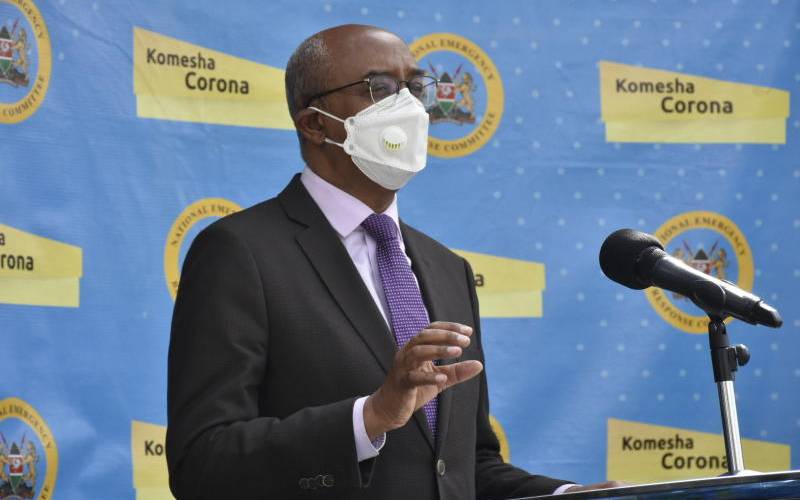 Kenya has registered 307 new Covid-19 cases over the past 24 hours bringing the total cases to 6,673. Nairobi registered 154 cases, the biggest chunk in the tally after the testing which involved examining 3,591 samples. In the daily update on the status of coronavirus infections, Health Chief Administrative Secretary Dr Rashid Aman (pictured above) expressed his concerns warning Kenyans against being complacent by disregarding the Covid-19 measures.

SEE ALSO: Where are the unspent Covid-19 fund billions?

“Huge numbers we are experiencing will only reduce if we follow the rules put by the government in containing the disease,” he said. Dr Aman said that there had been a public discourse about opening the economy and getting into the ‘new normal.’ However, he expressed pessimism saying that easing the restrictions like curfew and lockdowns would only be considered if cases are nosediving. He said that the government will have to consider a balance between initiating a new normal and minimising the infections. This, he said is a fragile process that if not properly handled, could trigger a surge in infections and force closure of some sectors. Dr Aman gave an example by narrating a story to the press, about an elderly man who visited him at his office in Nairobi yesterday, telling him how matatus heading to Ruaka, from Nairobi’s CBD were disregarding the social distance rules. The CAS told Kenyans to develop similar concerns to personalise the war against the virus.

SEE ALSO: Covid-19: How parents could ensure the continuation of learning

According to Dr Aman, the increase in the number of cases could be a message of an impending peak in the coming months. “We may be approaching a peak sometimes in July, August or September…it looks like going forward we are likely to see more samples testing positive,” he said. In the past 24 hours, 50 patients were discharged from the treatment facilities while one patient succumbed to the disease. This brings the number of recoveries to 2,089 and deaths to 149 respectively. Among those who were found with the virus, 18 of them were foreigners. The cases are distributed in the counties as follows: Nairobi 154, Mombasa 38, Machakos, 33, Kiambu 20, Narok 20, Kajiado 14, Busia 10, Kericho 4, Makueni and Nakuru 5 cases each, Kilifi, Kisumu, Kitui and Uasin Gishu (1) case each. Testing capacity

In the press conference, Dr Aman highlighted some of the challenges facing the government in combating the spread of the disease. While referring to an incident where a patient returned two results-negative and positive; Dr Aman told the media that such case was possible depending on how the samples have been handled. “If the samples are not properly stored then they can give the wrong results…If you have reagents that did not go through properly supply chain then you are going to have a problem of such nature,” he said while responding to a question from the reporters. To solve this anomaly, Health Director-General Dr Patrick Amoth said that the country was upgrading its laboratory services to meet the specifications of the World Health Organization. “We are doing laboratory capacity building in terms of sample collection, storage and archiving that we will use in the future,” Dr Amoth said. The other challenge Dr Aman mentioned was about contact tracing which he described as labour intensive and quite involving. He nonetheless exuded confidence in the emergency team saying that they had performed well in trying to break community-based infections. Dr Amoth said that 186 healthcare workers had been infected but are now on the recovery path. He said that the government is in the process of hiring 8,000 healthcare workers to meet the required patient-healthcare worker ratio. Some of them will be deployed at the border points which were badly hit by the virus. According to the DG, the country has scaled up its testing capacity after stocking enough reagents and acquiring 150, 000 testing kits. “For the next 20 days going forward we should not have a backlog because we have enough testing kits,” he said.