Grim numbers that made Uhuru think twice on economy 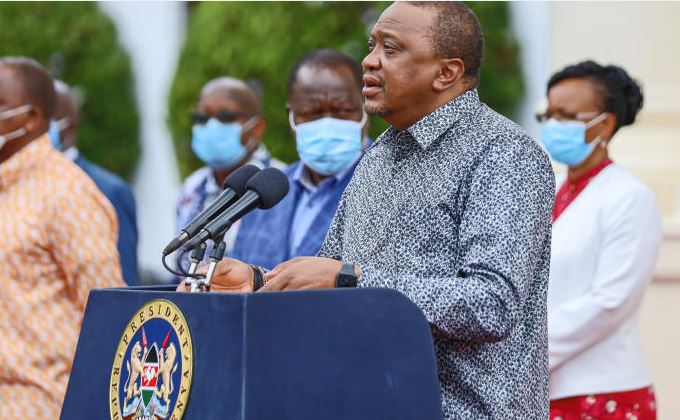 A worst case scenario of 45,000 Kenyans dying of Covid-19 jolted President Uhuru Kenyatta (above) to rescind his intended plan to reopen the economy. In a confession made at his highly anticipated national address yesterday, President Kenyatta said he was hellbent on reopening the economy until medical experts repulsed him with grim scenarios that spelt doom for the country. His intentions, propelled by latest rankings of Kenya as the third-largest economy in sub-Saharan Africa this week, stood no chance, with evidence tabled before him that countries that reopened at first wind of normalcy soon thereafter recoiled in mass death waves.

He noted the spikes of infections in South Korea, Pakistan and Malaysia after re-opening of religious gatherings just when the cases had seemingly reduced. “With these two view points on the table, I was not dealing with a right and wrong: I was caught in between two rights. And this clash of two rights placed me on the horns of dilemma,” said the President. Marathon meetings held by national Covid-19 committees and with the President on Thursday and Friday are said to have dragged on for hours, with medical experts vouching for status quo as government officials demanded greater justification for not reopening the economy. And President Kenyatta appeared to allude to this stake out in his address to the nation. The experts were tasked to draw out concrete scenarios to back up their arguments, scenarios which ended up thawing the President’s resolve to reopen. Disappointed people

Yesterday, he pulled them along to the national address at State House to justify to Kenyans the basis for the decision which disappointed some people who had placed all hopes on reopening. In one of the models he tabled, by October, Kenya would be getting into the peak of infections with 450,000 cases if the government relaxed the ongoing measures of curfew, lockdown and ban of social gatherings by 60 per cent. If these measures were relaxed by 40 per cent, the numbers would be 40,000 deaths from 300,000 infections by November. Relaxing the restrictions by 20 per cent was no better as there would be 200,000 infections with 30,000 deaths by December. President Kenyatta felt the numbers could not be ignored or lives sacrificed at the altar of economic needs. He knew his announcement would end in tears for those who had counted on him to return to their normal. With this, he slapped Kenyans with an extension of the curfew by 30 days. The curfew however will have variations; instead of 7pm to 5am, it will run from 9pm to 4am.

“This variation should enable Kenyans have a full work day schedule,” he said. The President also lifted the lockdown order on Eastleigh, Nairobi and Old Town Mombasa effective today, as well as in counties of Kilifi and Kwale. Mombasa, Nairobi and Mandera counties will still be on lockdown for another 30 days due to the increased number of cases. President Uhuru said if the restrictions put in place had not been taken, the case load in the country would be getting to 800,000 by next month. Early interventions

With the epidemiological model that one person infects two more people, the number would have hit 2.4 million in 21 days. “By end of August, 75,000 Kenyans would have died from the virus,” he said. But due to the early interventions put in place just two days after the first case was reported on March 13, the number of deaths now stand at 83 while the total positive cases is 2,600. The President said it was necessary for the country to embrace the grim reality of its preparedness if the disease was to hit exponentially. On this, he said Kenya does not yet have the adequate testing and contact tracing mechanisms, and hospital capacity, which are the irreducible minimums health experts gave if any reopening is to be done.

“The question we must ponder is whether we have met this threshold to lift restrictions. And the answer is no. Nairobi and Mombasa are taking the lead in new infections,” he said. 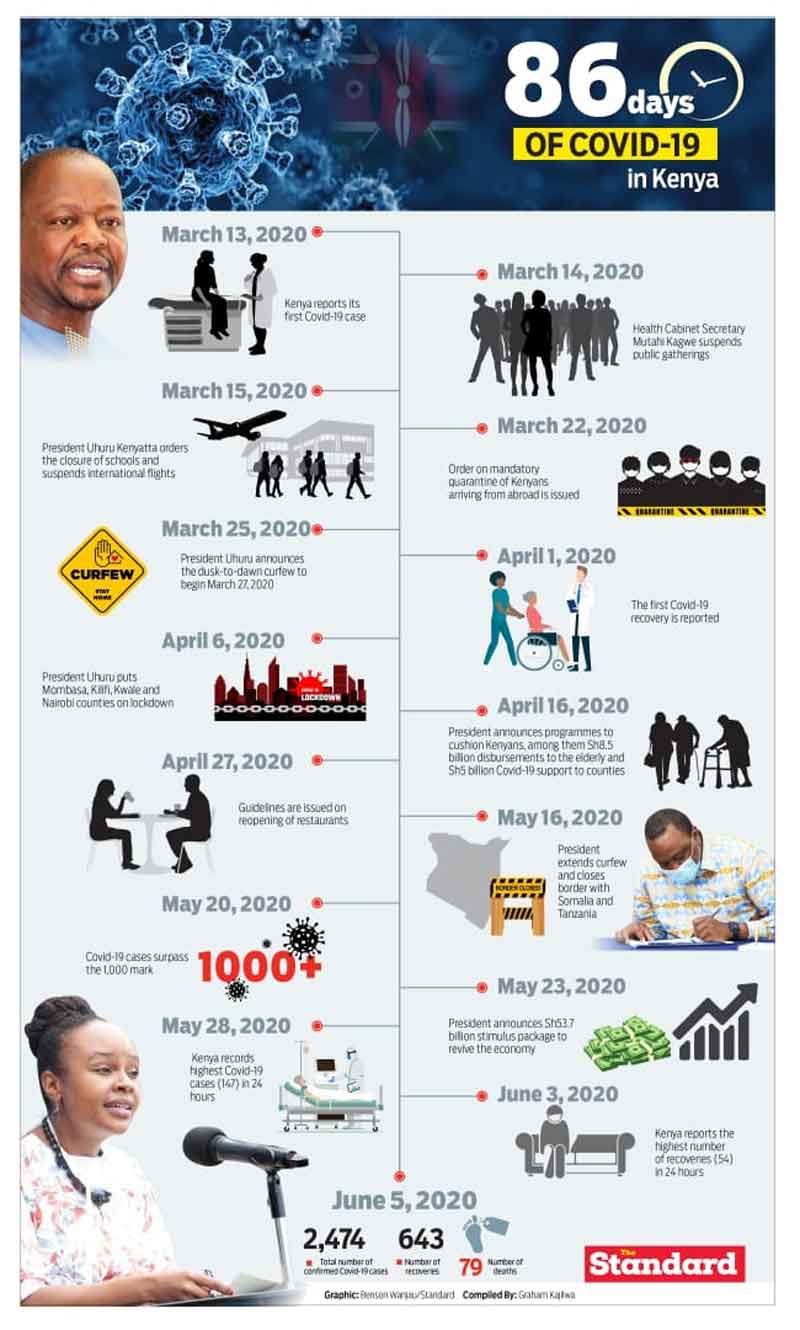 Isolation facilities He said the country does not have the necessary number of isolation facilities, giving an example of Siaya County that has a 10-bed isolation ward, with already nine patients. “Similarly, Busia County has 34-bed isolation facility and by two days ago, it was full,” he said. The President said he will consider possibility of de-escalating the containment measures if the health mandate is shared between counties and the national government. To this effect he announced an extra-ordinary session of the national and county government co-coordinating summit on Wednesday this week. The summit will discuss how effective the containment measures have been, determine how each county can have at least 300 isolation bed capacity and come up with modalities on how the economy can be reopened progressively. President Kenyatta, in anticipation of reopening, further directed that interfaith and religious organisations have a sit down with the Interior and Health ministries to work out modalities on protocols of re-opening places of worship. However, in the meantime, the ban on all public gatherings, including political rallies, bars and social gatherings is extended for 30 days. Similarly, the ban on international flights is also extended. “In the meantime, the Ministry of Transport is directed within seven days from date thereof to engage all key stakeholders and develop protocols to guide resumption of local air travel,” he said. The president also ordered consultations in the education sector jointly with the Ministry of Health, which will see publication of guidelines on the gradual and progressive return of normalcy in the sector by the third term from September 1. “Further, that the ministry announces the new school calendar by mid-August,” he said.