What exactly is a ventilator - and how vital are they in treating COVID-19?

Health & Science
Ventilators are machines that help patients who can’t breathe on their own. They blow air – and sometimes air with extra oxygen 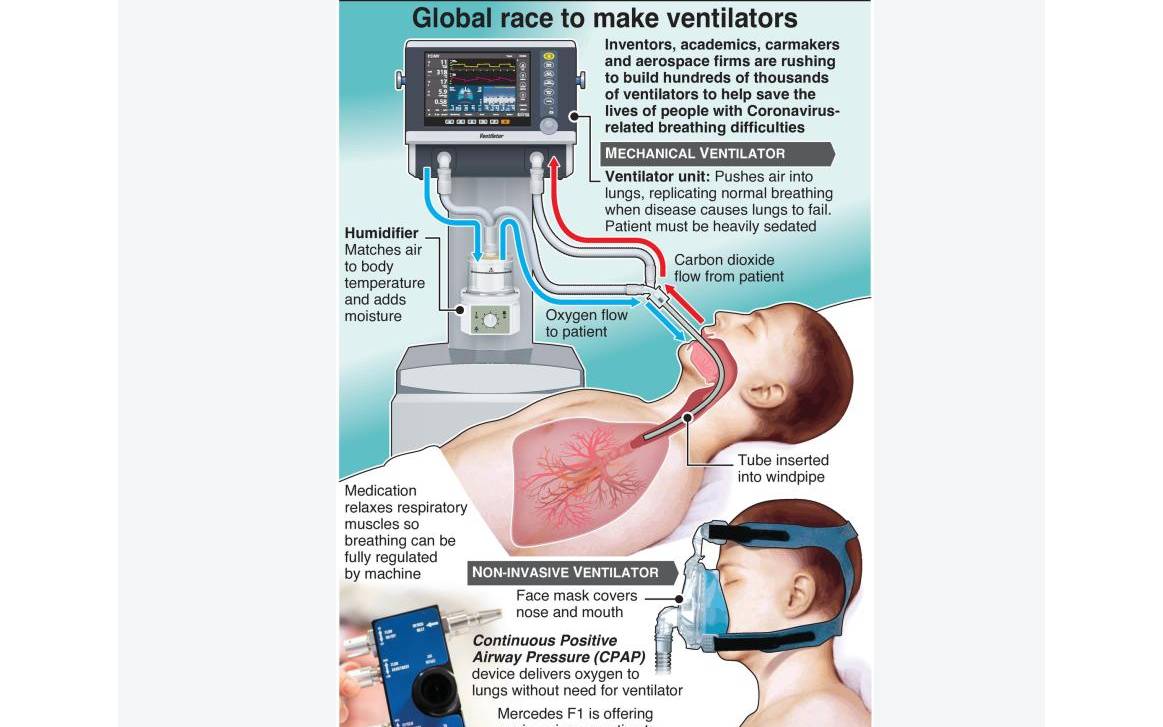 What is a ventilator and why is it critical in fight against Covid-19? During the coronavirus pandemic, ventilators have become a topic of heated debate. There aren’t enough, they aren’t where they need to be, people are having to share, some people are trying to make their own, and the world’s best engineers are working out how to scale up production. Ventilators are machines that help patients who can’t breathe on their own. They blow air – and sometimes air with extra oxygen – down the airways and into the lungs. Some also help patients expel air.

Common symptoms The most common symptoms of Covid-19 are fever, tiredness and a dry cough. While around 80 per cent of people who get it recover without special treatment, around 1 in 6 become seriously ill, developing breathing difficulties, according to the World Health Organisation. That’s where ventilators come in, assisting the lungs while the body fights off the infection and – hopefully – recovers. About 30 per cent of people hospitalised with Covid-19 are likely to require mechanical ventilation, according to a study by Imperial College London. With the Covid-19 pandemic advancing so fast, many countries are facing shortages of ventilators, forcing doctors on the frontline to make difficult choices about who gets them and who doesn’t. Patients are sharing ventilators in one New York hospital, according to the New York Times, a tactic that’s been used before in crisis situations, including during Italy’s coronavirus outbreak and in the immediate aftermath of the 2017 Las Vegas shooting.

In many countries, companies and governments are working together to make more ventilators, and fast. UK Prime Minister Boris Johnson has asked more than 60 manufacturing businesses to help step up production of medical equipment, including ventilators. “Some good news: Britain’s advanced high-tech manufacturing resource is solving the ventilator problem — and fast. First batch of new NHS ventilators to be built this weekend,” tweeted Andrew Neil, Scottish journalist and broadcaster. Aren’t a panacea But ventilators aren’t a panacea. Inserting a breathing tube into airways can raise the risk of lung infection. Breathing tubes can also make it hard to cough, which is one way the body clears out irritants.

The message from the World Health Organisation remains the same: maintain social distancing, stay at least one metre away from anyone who is coughing or sneezing, and wash your hands frequently. [Emma Charlton, Senior Formative Content Writer at World Economic Forum]