When you pay for your favourite meal, do you wash your hands before sitting down to eat? If not, you may want to think twice, because money, especially the Sh20 coins and the Sh50 notes circulating in Nairobi, is dirty and a risk to your health, the Kenya Medical Research Institute has warned.

To put it quite literally, you might not want to put your money where your mouth is.

According to Kemri, money and mobile phones have been confirmed to carry large amounts of disease-causing germs.

“Most of the money denominations and phones were contaminated with pathogenic microorganisms,” says Kemri in a new study. 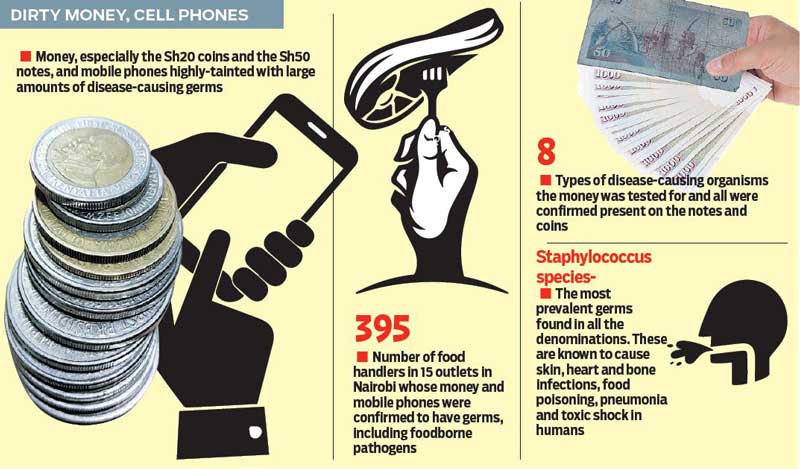 Scientists tested money and phones from 395 food handlers in 15 different types of outlets in Nairobi County and confirmed the two items to be highly-tainted with disease-causing germs.

The research also involved researchers from Jomo Kenyatta University of Agriculture and Technology (Jkuat) and the US Army Medical Research Unit–Kenya.

They presented their findings at the 7th East African Health and Scientific Conference held in Dar es Salaam, Tanzania between March 27 and 29.

The researchers had collected money from the food handlers, ranging from Sh1 to Sh1,000 and every other denomination in between.

The money was tested for eight types of disease-causing organisms and all were confirmed present on the notes and coins. Of these, 20 per cent were food-borne pathogens.

The most tainted were the Sh20 coins and Sh50 notes, possibly because of their wide circulation. The least contamination was in Sh1, Sh5 coins and the Sh1,000 notes.

The most prevalent germs found in all the denominations was Staphylococcus species. These are known to cause skin, heart and bone infections, food poisoning, pneumonia and toxic shock in humans.

Other pathogens found in the money and known to cause serious human diseases were Bacillus species, which may cause food poisoning, shock, meningitis and blood poisoning.

Also found in the money was E coli, a contaminant usually from human feaces and known to cause most of urinary tract infections. A whole lot of other equally dangerous pathogens were found on the money sampled.

Equally, phones were tested and confirmed to be tainted with 12 pathogens, with Staphylococcus species being the most prevalent.

Other pathogens included E coli, Pseudomonus and Klebsiella species, which can cause pneumonia, diarrhea, and blood poisoning among other ailments.

The study reports more than a third of the participants had no training in food handling, while 34 were sick at the time of the survey, some suffering from stomach problems.

While most reported washing their hands after visiting the toilet, more than 60 per cent did not wash hands after touching money or using their phones. Normally, food handlers should not be the same people handling money.

“Food handlers and the general public should be sensitised on the risks involved in handling food after touching money and cellphones,” warns the study.

This warning comes at a time Nairobi is battling a cholera outbreak, with the county government warning residents to be cautious when handling food.

This is the second time Kemri is warning Kenyans over the health risks of handling money.

In 2009, Kemri tested coin money from different types of food handlers in Nairobi and like in the current study, found them highly-contaminated with disease-causing organisms.

Most contaminated were coins collected from butchers, followed closely by roadside maize roasters and food kiosks. Most of the coins were found to be contaminated with faecal organisms.

The money found to be contaminated with agents from human faeces, the researchers said, was an indication people were either not using toilet paper, or using it improperly.

One of the parasites found on the coins was the cryptosporidium, which causes serious diarrhoea in children.

Coins collected from matatu touts ranked very highly in the amount of disease-causing organisms they carried, topping in the amount of moulds on them and only second to butchers in levels of bacteria exhibited.

The team did not, however, collect coins tithed in churches to determine their level of hygiene. The study had isolated 16 organisms with the capacity to cause mild to serious disease.

Some types of parasites found on the coins, especially from butchers, are known to cause serious zonootics, a disease that can be transmitted from animals to human.

South Africa Covid variant: Health Ministry calls for enhanced surveillance
To personalise content, tailor ads and provide best user experience, we use cookies. By using our site, you agree to use our cookies.