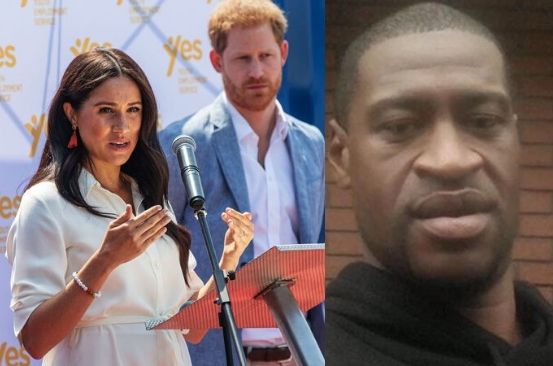 Meghan Markle and Prince Harry have been "quietly having meetings" with people linked to the Black Lives Matter movement after the death of George Floyd.

The Duke and Duchess of Sussex have been speaking to different organisations and individuals to further educate themselves about racial injustices in the world and make sure they better understand what is currently happening.

According to Bazaar magazine, they also hope to further understand "the issues of police brutality" after black American George Floyd was killed by a white police officer in Minneapolis, Minnesota.

“Both Meghan and Harry have been quietly having meetings behind the scenes with people on all levels to make sure that they are educated and connected to the issues of police brutality and the Black Lives Matter movement," reported Bazaar.

A source told the magazine: "Harry and Meghan have been having private conversations with community leaders and people at every level.

"By speaking to as many people and organizations as possible, it has been a way for them to feel connected to everything that's going on and learn more about the issues surrounding it."

This comes after Meghan gave her own heartfelt address to the world about racial issues.

George Floyd died on May 25 after being arrested.

A police officer knelt on his neck for eight minutes and 46 seconds as he expressed that he couldn't breath.

The tragic event triggered protests all over the globe as people call for an end to systemic racism and police violence.

Meghan added to the conversation with a powerful video.

"I wasn’t sure what I could say to you. I wanted to say the right thing and I was really nervous that it would get picked apart.

"And I realised the only wrong thing to say is to say nothing."

Meghan also recalled the 1992 LA riots when black man Rodney King was beaten by the police.

"I was 11 or 12 years old and it was the LA Riots, which was also triggered by senseless act of racism," she explained.

“I remember the curfew and I remember rushing back home and on that drive home, seeing ash fall from the sky and smelling the smoke and seeing the smoke billow out of buildings.

“I remember seeing men in the back of a van just holding guns and rifles.

“I remember pulling up at the house and seeing the tree that had always been there, completely charred.

"And those memories don't go away."