Lizzo's tough rise to top of music after depression and rejection 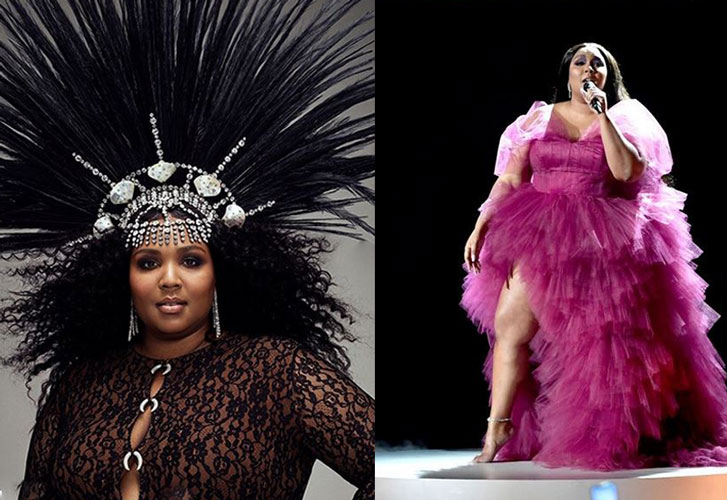 She has burst onto the music scene in the same way she lives her life – energetic, larger-than-life and with a massive dose of body-positivity.

Lizzo the sassy rapper-singer turned heads on The X Factor: Celebrity with her electrifying performance of her single Good As Hell – complete with skimpy white leotard and lots of attitude. 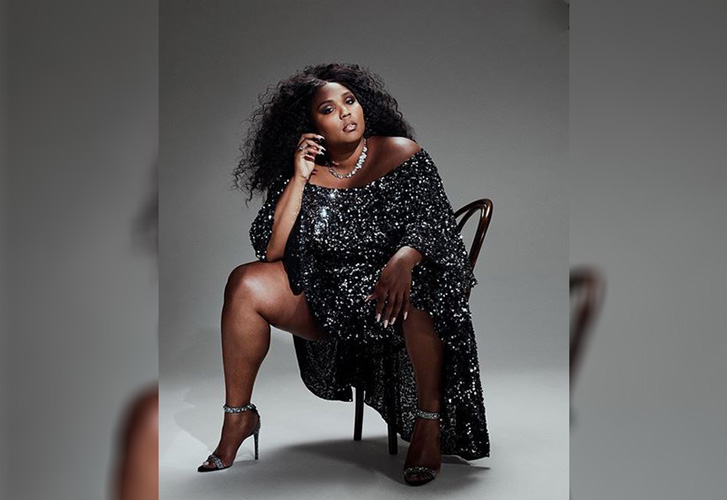 With her charisma, confidence-boosting lyrics and can’t-take-your-eyes-off-her style – not to mention her ability to twerk and play the flute at the same time – the American has come from nowhere to become a pop icon. And she is set to go further still after notching eight Grammy 2020 nominations this week – more than any other artist.

The proud plus-sized star, 31, is up for the ceremony’s ‘big four’ categories – best new artist, best song, best record and best album. She celebrated by posting an unflattering photo of herself sobbing on her Instagram story and posting the words ‘WE ARE ALL WINNERS’ on Twitter .

And it is precisely this that has marked Lizzo’s breathtaking rise to the top – messages of self-love and empowerment which can be found in all her hit songs and show-stopping performances. 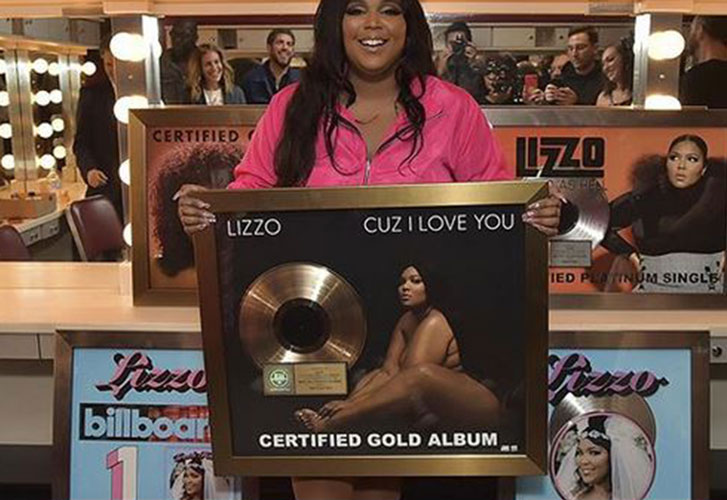 During her rousing X Factor performance, with a group of equally energetic, different-sized dancers, empowering phrases such as ‘boss up and change your life’ flashed up behind them.

And before her rendition of the same song at the MTV Video Music Awards in August, which she performed in front of a giant, wobbling inflatable bottom, the singer took to a literal podium to shout out a sermon of self-acceptance. 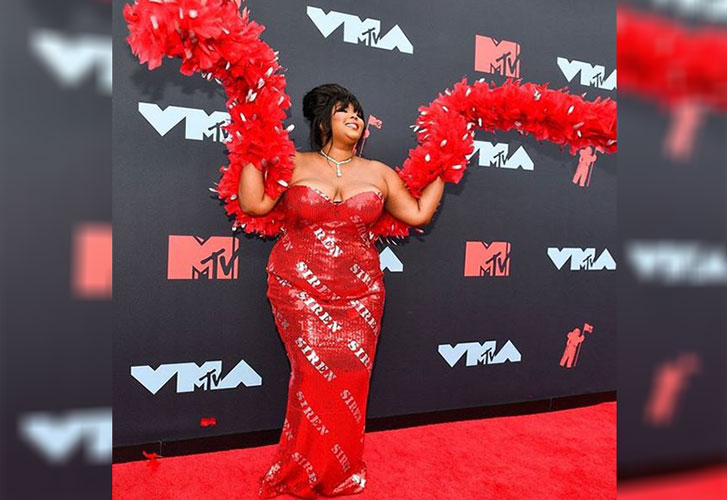 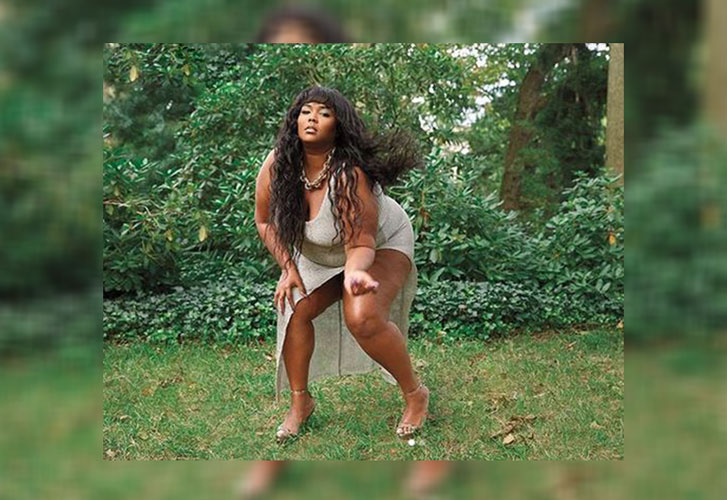 In April, when she was unveiled as the “next big thing” in V magazine she told fellow singer Sam Smith, who was interviewing her: “First off, I love my body. No matter what angle you shoot it at, no matter the lighting, my body is so beautiful all the time.

My second favourite thing about myself is my blackness. I am really just so honoured to be graced with this identity. I just love being a black woman, even in a world where we are statistically the least desirable. I am still here, and I still rise.” 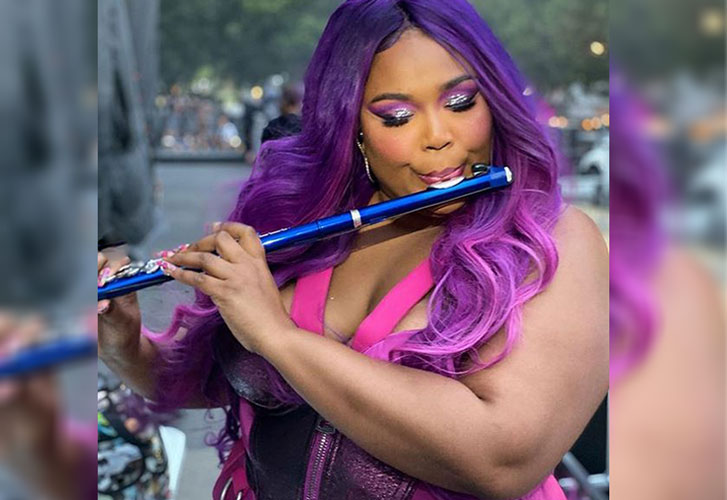 Admitting it took her time to feel so confident, she said: “I felt this with how I was being perceived for much of my life.

The result is a growing army of devoted fans, or Lizzbians as she has named them. 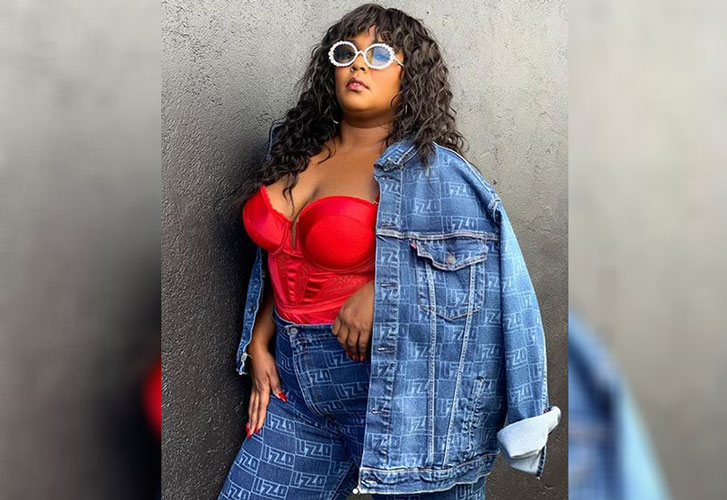 Lizzo’s stardom has actually been years in the making.

Born Melissa Jefferson in Detroit, she was raised by her business-owner parents, who took her to live in Houston, Texas, when she was 10.

There, she studied to be a classical flutist and playing in her junior high school’s marching band, while attending the Church of God in Christ – but also discovered a love and a gift for rap music. Aged 14, she formed her first rap group, the Cornrow Clique, with two of her classmates, and got her nickname – a combination of Lissa, by which she was then known, and Jay-Z ’s song Izzo, which was popular at the time.

But while she could rap, Lizzo later said she wasn’t popular because she was in the marching band and listened to Radiohead, and was mocked by her classmates as “too white”. 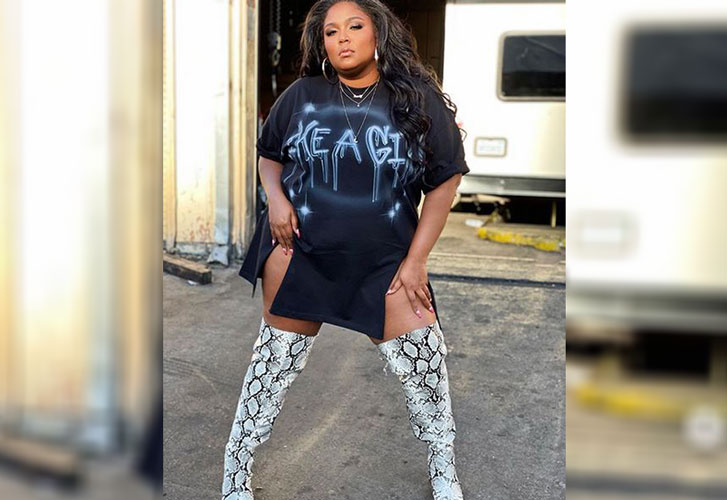 Aged 20, while studying classical music at the University go Houston, she joined her first real band, playing the flute in prog-rock group Ellypseas.

But two years later the band finished and Lizzo’s father passed away, which sank the struggling musician into depression. She recently said: “I got really depressed. I quit music. I was like, ‘I have no reason to do this anymore.’ Then I realised I have to do this for myself.” 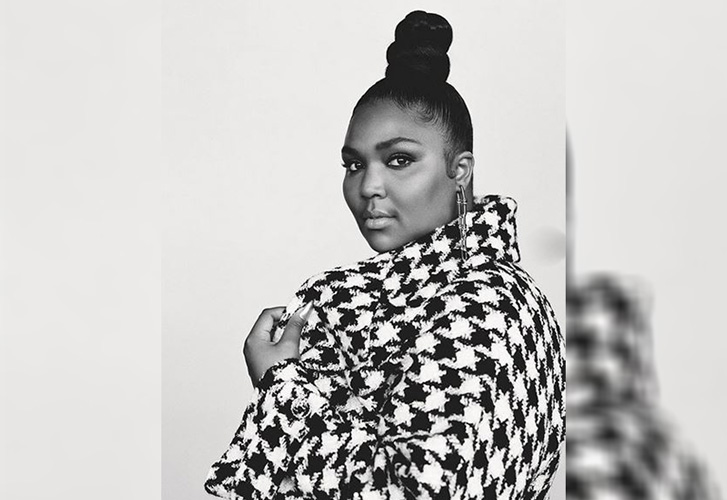 A year later she moved to Minneapolis, where she spent a year living out of a car trying once again to break into the music industry, and quickly became well known in the city’s hip-hop community.

Her solo hip-hop album, Lizzobangers, was released in 2013 and met with critical acclaim, and even led to a tour of the US and UK, but wasn’t enough to catapult her to global fame. 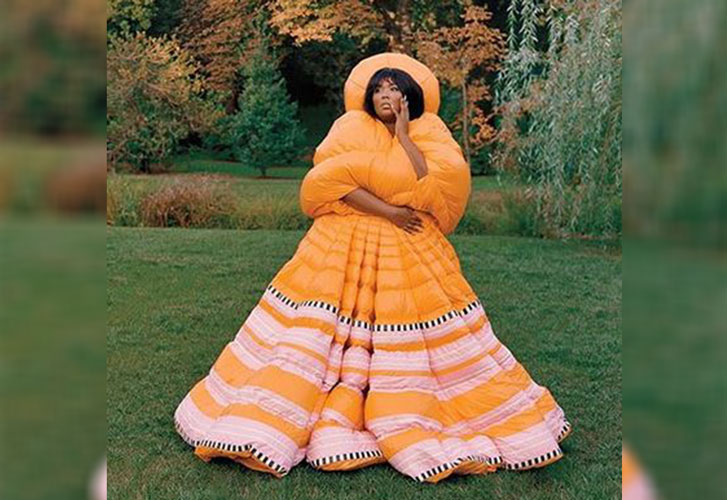 A protégé of Minnesota native Prince, she performed at his Paisley Park estate and recorded with the icon before his death, collaborating on his 2014 album Plectrumelectrum. And bizarrely, she also appeared in an episode of Made in Chelsea: NYC, the spin-off series of the reality show, in 2014 while singing in a New York club.

Even back then, many of Lizzo’s songs were about accepting herself – something which she has struggled with since childhood.

In 2017, admitting that she was always insecure about being fat, she said: “I realised I would have to win the war against this insecurity. Self-praise, daily affirmations. It got annoying, I wouldn’t stop complimenting myself.” 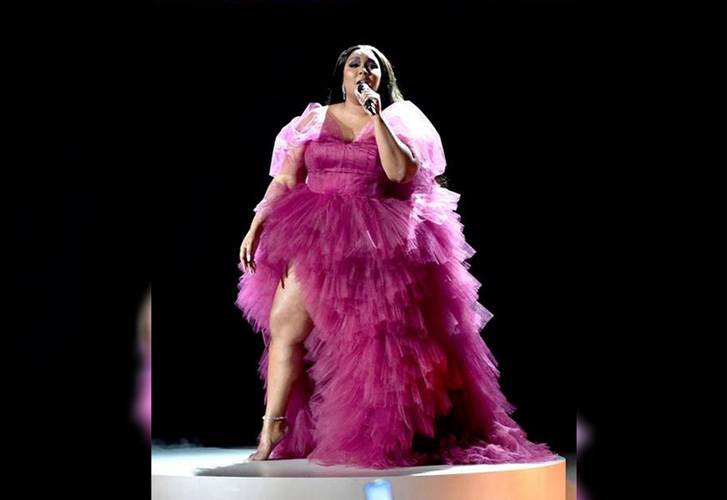 Since then, Lizzo has made it her life’s work to spreading her message of acceptance and self-love through her music, telling people that different is beautiful before it was cool to do so.

She recently said: “Every time I rap about being a big girl in a small world it’s doing a couple of things.

“It’s empowering my self-awareness, my body image, and it’s also making the statement that we are all bigger than this.” 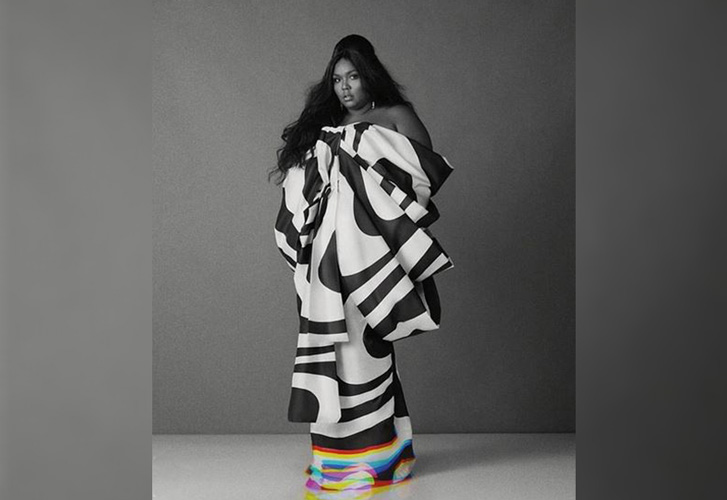 Lizzo, who signed with Atlantic Records in 2016, actually released Truth Hurts, one of her Grammy nominated singles, two years ago, but didn’t even enter the charts at the time. In April this year, it unexpectedly began to gain traction in the Billboard chart, which many have put down to it appearing in a Netflix movie, Someone Great.

Then, in September, it became Lizzo’s first song to hit to the top of the Hot 100, and began her astounding rise to international fame. A week later, her album Cuz I Love You, which had been released in April, had sold more than 500,000 copies and became certified gold.

The video for the song, in which the singer marries herself, has now amassed more than 150 million hits on YouTube. 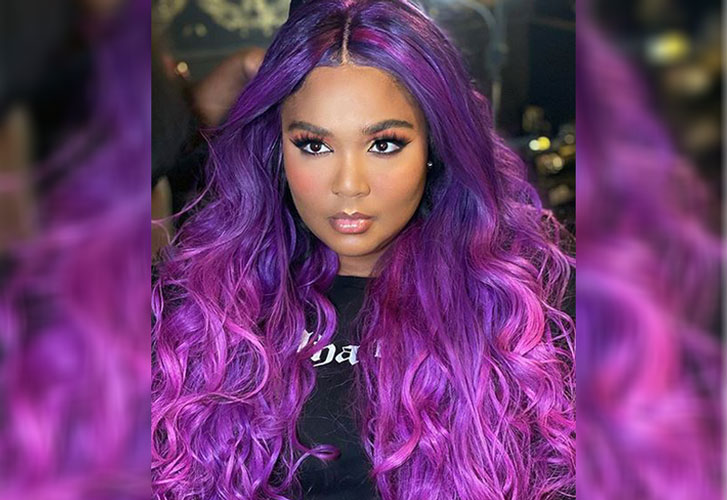 This year she has also wowed the crowd at Glastonbury Festival’s West Holts Stage and starred alongside Jennifer Lopez in the film Hustlers. Music critic David Levesley believes Lizzo’s success is more than deserved.

He said: “It feels correct. Nobody has been less appreciated and more consistently exceptional than her.”

Lizzo herself, however, is firmly rooted on the ground. During an emotional homecoming performance in Detroit, she wept in front of thousands in the crowd as she talked of spotting a city billboard emblazoned with her image. 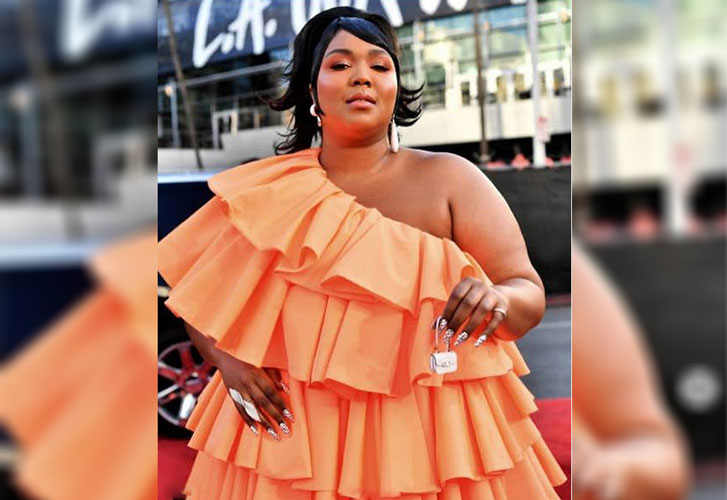 Wiping away tears, she said: “I thought of my father, and how proud he would be of me right now.

“I’m not the flashiest type, I do this for the love of music. I want to make the world a better place.”

Meghan Markle has 'charisma' and 'turned Harry into a better man,'
Entertainment - By Mirror