Imagine being clobbered by police and placed in cold congested cells for defaulting on medication.

This is what happened to Daniel Ng’etich and Patrick Kipng’etich from Iriru village in Nandi County five years ago. They failed to adhere to Tuberculosis (TB) treatment, exposing the public and their families to infections.

The two were arraigned in a Kapsabet court for defying the Public Health Act Section 27.

Ng’etich and Kipng’etich are among hundreds of TB survivors that joined the globe in celebration of the World TB Day, a disease that annually kills about 1.5 million people globally.

Ng’etich recalls the cold evening, when the area chief visited his home accompanied by police who handcuffed and took him to Kapsabet Police Station.

He had been placed on treatment after he was diagnosed with pulmonary TB, a treatment he only adhered to for two weeks instead of six months. He discontinued after his health improved.

Ng’etich says that police accused him “of being a security threat to the lives of the entire community for failing to take drugs”.

He, however, complains that he was not sensitised on the importance of treatment and that  defaulting medication of infectious diseases like TB was a crime.

Ironically, after his arrest he was not supplied with TB medicine despite being hauled into crowded cells for two weeks.

“I did not see the essence of my arrest because we mingled with other inmates at the cells,” said Ng’etich. 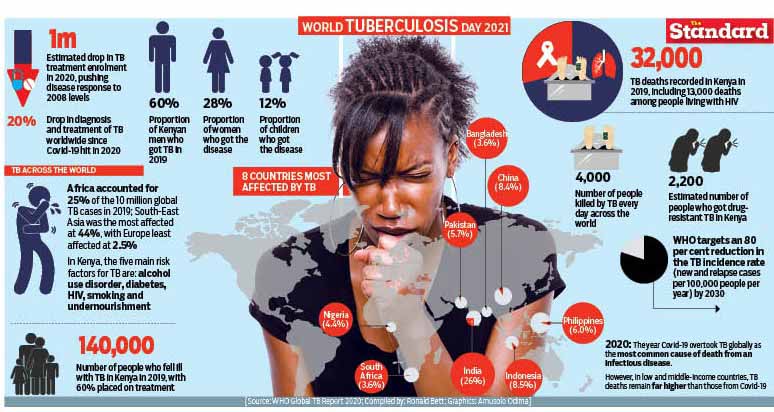 After his release, Ng’etich was subjected to stigma and discrimination by close family members and the larger community. His wife ran away with their five children for fear of being infected.

“I was so weak after being released from prison. I needed moral support, but my wife and children ran away,” recalls Ng’etich who has since healed from the disease.

He suspects he acquired it from his brother who died in 2019.  His younger sister also succumbed to TB related complications.

Ng’etich is today a TB ambassador who sensitises locals on the effects of defaulting on TB medication more so during the Covid-19 pandemic.

The other patient arrested was Patrick Kipng’etich, 33. He says he defaulted on TB medication due to side effects which included lack of sleep and nightmares.

Upon release, he underwent counseling from medical practitioners. “Taking at least 18 tablets at ago and injections every day was not easy,” says Kipng’etich who was declared TB free after nine months of treatment.

Ng’etich’s case attracted the attention of Kelin, a health and humanitarian organisation, which petitioned the ruling and on March 24, 2016, the High Court declared the practice of confining TB patients in prison illegal.

The Government was directed to develop policies on involuntary confinement of people suffering from infectious diseases in line with international standards.

Health and Human rights lawyer Allan Maleche explains that though the Public Health Act is still in force, the Health Ministry came up with policies which dictate procedure before arrests and jailing of patients defaulting on treatment.

Public health professionals are also educating the public on TB and the importance of adhering to treatment.

Dr Andrew Owuor, a consultant physician of respiratory medicine and critical care at Kenyatta National Hospital (KNH) said among policies adopted is the community strategy where patients are placed on treatment at the nearest health centres and followed up by partners or neighbours.