There appears to be no end in sight for the ongoing health workers strike as they stood their ground despite a directive that their salaries be stopped.

Emotions ran high yesterday as doctors and nurses said they will not be used as slaves by the national and county governments.

The tough talk by the medics came as the Council of Governors (CoG) wrote to the counties directing them to institute disciplinary action against healthcare workers who have not reported to work.

“As such, we advise the counties to take the following measures: effect stoppage of salaries where employees have not rendered their services. This is accordance with Section 79(6) and 80(1)(b) of the Labour Relations Act,” reads the letter dated December 21 and signed by Wycliffe Oparanya, the CoG chair who is also Kakamega Governor.

This letter, together with Health Cabinet Secretary Mutahi Kagwe’s sentiments on Tuesday that the striking health workers be replaced, have angered the medics who vowed to not relent in their quest.  The CoG directive also advises sacking.

Dr Chibanzi Mwachonda, the Kenya Medical Practitioners Pharmacists and Dentists Union acting secretary general, said sacking health  workers will not solve anything as the new ones will face the same problems.

Mwachonda said what they are fighting for is a matter of life and death and not money. He added that while the government has made progress in addressing their issues, they have not been done to completion.

“Yes, you are powerful but we will not be slaves in this country. We have our rights and we have given our demands which have to be met,” Mwachonda said.

Seth Panyako, the Kenya National Union of Nurses secretary general, said a commission is no longer part of the bargain as there is a case in the Constitutional Court to have the commission be part of the Building Bridges Initiative.

“We are healthcare workers and we know only the National Hospital Insurance Fund can provide comprehensive cover. Private companies can collapse anytime or the owners can walk out with them,” he said.

Ukur Yatani, the Treasury Cabinet Secretary whose ministry has been faulted for delays in disbursement of funds to counties, hence interruptions in salary payments and statutory deductions for unions including NHIF, said the government had made strides to address the impasse. 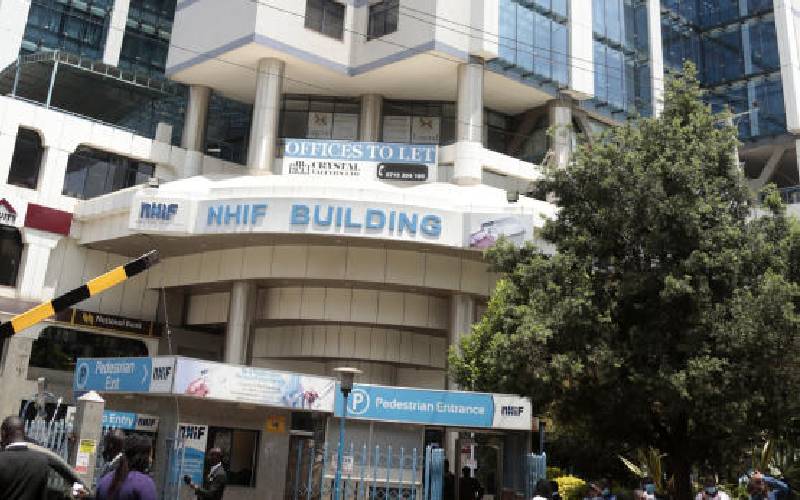 He said the government allocated Sh6.5 billion for group life cover which will include healthcare workers as well. “In my view, that is good enough, it is a beginning. It may not be to the satisfaction of the medical staff but we have provided resources,” Yatani said.

In Busia, Governor Sospeter Ojaamong threatened to employ new clinical officers and nurses. He added that his administration has done everything within its means to ensure welfare of medics in the county is taken care for. "Even after addressing their concerns, they have decided to go on strike," Ojaamong said during a meeting with professionals in Budalang’i yesterday.

Deputy governor Moses Mulomi, who is also acting health and sanitation executive committee member, confirmed yesterday that none of the medics were reporting to work.

In Homa Bay County, public hospitals were deserted. At the county referral hospital, wards were empty except a few which were manned by health workers from Médecins Sans Frontières (MSF).

“My child is sick. I am going to see if she can be treated at St Paul’s Hospital because I do not have money,” said Mary Aoko, a resident.

In Siaya, the county government said it will not victimise health workers who are on strike.

County health executive Dismas Wakla said even though the situation is hurting wananchi, they need to understand that most grievances raised by health workers can only be addressed nationally.