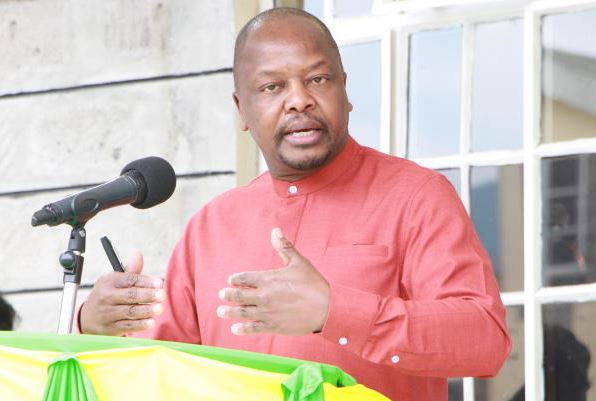 The Health Ministry has reported 447 new coronavirus cases, the highest daily record since the first case was reported.

The total number of confirmed cases in the country now stands at 8,975.

Health CS Mutahi Kagwe (pictured) was briefing on the status of Covid-19 from Mombasa County, whose cessation of movement was lifted on Tuesday.

Sixty-four patients have also been discharged from various hospitals across the country, bringing the recoveries to 2,657.

Four more people have succumbed to the disease, raising the death toll to 173.

Of the new cases, males continue to dominate with 260 more cases and females with 167 cases. The youngest case is a one-year-old infant and the oldest an 88-year-old.

CS Kagwe asked that these new numbers should make us afraid neither should they make us complacent.

He said: “If this virus was a physical enemy, the government would be able to protect you. The responsibility now shifts to us. Kwa sasa, tujikinge na tukimbie sana kutoka kwa hii virusi (let’s protect ourselves from this virus)”

Mombasa County which was the focus on Thursday has reported 14 new cases.

According to data from the Health Ministry, it has recorded the second-highest Covid-19 cases in the country.

Despite this, CS Kagwe says it has set the bar high in the manner in which it has handled the pandemic, by observing frequent hygiene practices and overall cleanliness.

“County preparedness is critical in ensuring that our country is opening. We need to put pressure on our county governments to prioritise health,” the CS echoed.

The Hassan Joho-led County is also leading in the number of isolation beds.

Mombasa Deputy Governor William Kingi said, “We have mobilised over 150 beds for severe cases and 300 beds to deal with moderate cases. We have 12 ICU beds and intend to mobilize to 50.”

Earlier, President Uhuru Kenyatta had directed that no county should have less than a 300-bed capacity.

Currently, Mombasa has 1,663 active cases. The CS notes that the number is likely to increase owing to easing of the restrictions and lifting the cessation of movement, as visitors are now expected to start streaming in.

Nairobi County is however leading the pack with a 4,554 caseload.

With the increasing numbers, Director-General Patrick Amoth, assured Kenyans that the country had now acquired an additional 483 ICU beds for Covid-19 patients. Initially, before the onset of the virus, the country had only 450 ICU beds.

Since March 13, 2020 when the first case was confirmed in Kenya, the country has reported more than 8,000 confirmed cases and over 170 deaths.

According to the Ministry of Health, 10 per cent of infections are symptomatic.

Over 65 percent of those infected are males and a majority are in the age group of 30-39 years.