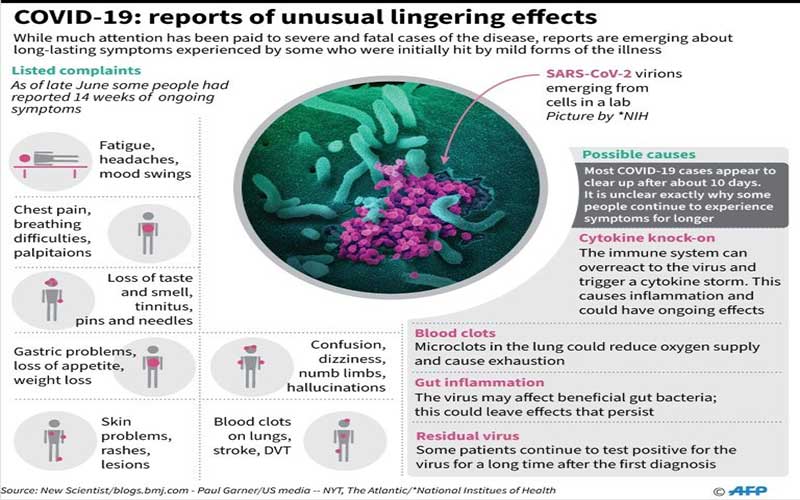 "What I miss most is the smell of my son when I kiss him, the smell of my wife's body," says Jean-Michel Maillard. Anosmia -- the loss of one's sense of smell -- may be an invisible handicap, but is psychologically difficult to live with and has no real treatment, he says. And it is the price that an increasing number of people are paying after surviving a brush with the coronavirus, with some facing a seemingly long-term inability to smell.

"Anosmia cuts you off from the smells of life, it's a torture," says Maillard, president of anosmie.org, a French group designed to help sufferers. If you have the condition you can no longer breathe in the smell of your first morning coffee, smell the cut grass of a freshly mown lawn or even "the reassuring smell of soap on your skin when you're preparing for a meeting", he says. You only truly become aware of your sense of smell when you lose it, says Maillard, who lost his own following an accident. And it is not just the olfactory pleasures you lose. He points out that people with anosmia are unable to smell smoke from a fire, gas from a leak, or a poorly washed dustbin. Eating is a completely different experience too, as so much of what we appreciate in food is what we can smell, says Alain Corre, an ear, nose and throat specialist at the Hopital-Fondation Rothschild in Paris.

"There are dozens of causes of anosmia," he says, including nasal polyps, chronic rhinitis, diabetes, Alzheimer's and Parkinson's. Now the new coronavirus has been added to that list, says Corre -- with the symptom alone allowing a diagnosis of COVID-19 in some cases. "When people lose their sense of smell and don't get it back, we note a real change in the quality of life and a level of depression that is not insignificant," he adds. The problem is when the condition persists, he says. "To be deprived of your sense of smell for a month, it's not serious," says Maillard. "Two months, it starts to become a problem. But after six months, you're all alone under a bell jar.

"There's a psychological aspect to this which is very difficult to live with," he insists. "You need to get help." - The search for treatment - There is no specific treatment for the condition. You have to address the cause, says Corre, but "the problem of the anosmias linked to the virus is that often, the treatment of the viral infection has no effect on your smell. "According to the first numbers, around 80 percent of patients suffering from COVID-19 recover spontaneously in less than a month and often even faster, in eight to 10 days." For others, however, it could be that the disease has destroyed their olfactory neurons -- the ones that detect smells. The good news is that these neurons, at the back of the nose, are able to regenerate. Two Paris hospitals, Rothschild and Lariboisiere, have launched a "CovidORL" study to investigate the phenomenon, testing how well different nose washes can cure anosmia. One cortisone-based treatment has proved effective in treating post-cold instances of anosmia and offers some hope, says Corre. Another way to approach the condition is through olfactory re-education, to try to stimulate the associations that specific smells have in your memory, he says. His advice is to choose five smells in your kitchen that are special to you, that you really like: cinnamon say, or thyme. Breathe them in twice a day for five to 10 minutes while looking at what it is you are inhaling. Anosmie.org has even put together a re-education programme using essential oils, working with Hirac Gurden, director of neuroscience research at the National Centre for Scientific Research (CNRS). It is based on the work of Dresden-based researcher Thomas Hummel. "As early as March, we got several hundred phone calls, emails from people who had COVID and who were calling for help because they couldn't smell anything any more," says Gurden. Maillard meanwhile finished his re-education programme last winter, using four smells. "Today, I have 10 of them," he says, including fish, cigarettes and rose essential oil. "I've even found a perfume that I can smell!" he declares.