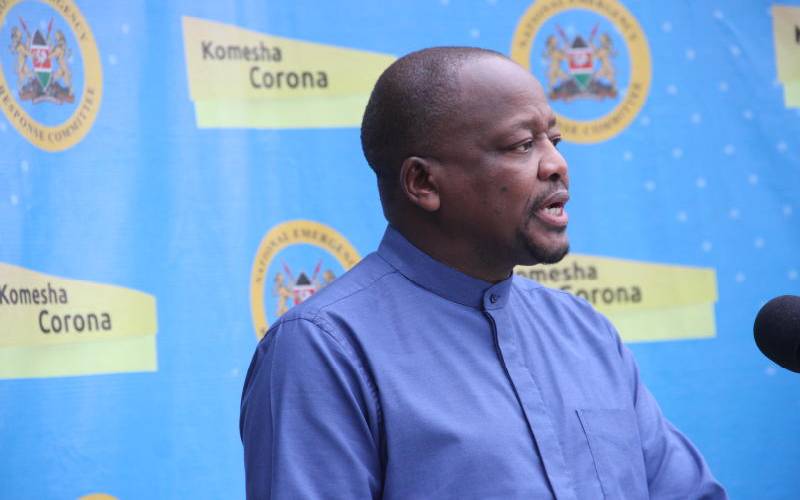 Kenya yesterday reported a new high of Covid-19 cases on a day it was marking 100 days since the pandemic was confirmed in the country.

At the same time, the government demonstrated how the pandemic has transformed the country’s health sector.

According to statistics released by Health Cabinet Secretary Mutahi Kagwe (pictured), the high number mirrors the increased samples tested, which were 3,651. To date, the government has tested 140,012 samples.

"The 100-day milestone is bitter sweet. We mourn the 123 lives we have lost to date, and celebrate the fact that we are better equipped and more informed to combat Covid-19 than before,” said the CS.

Kagwe said the 100 days of the pandemic have been a learning process for the ministry in charge and the country at large.

"Some public health actions we have taken, such as social distancing, have brought about anxiety and feelings of isolation. However this was necessary as the enemy is invisible," he added.

Yesterday was the second time where over 200 people tested positive for the virus. On June 18, the ministry reported 213 positive cases from the highest sample size so far of 6,024.

This sample size, however, was made up of about 5,000 from a backlog. On that day, the ministry also reported the highest fatality in 24 hours as 10 people died. However in yesterday's tally, there were two deaths increasing the number of patients who have succumbed to 123.

Yesterday, as Kagwe released the daily tally, he took time to detail how the country’s health system has transformed since the first case was reported on March 13, 2020.

By yesterday, the government had processed 59,958 samples with 2,717 testing positive.

“The figures demonstrate that the number of samples tested increased as we upgraded our testing capacity,” said Kagwe.

The CS said the country has come a long way since the first patient was confirmed. A major concern that the disease unearthed was on how unprepared Kenya was to handle a pandemic.

“As a country we had only eight infectious disease beds. We were ill-prepared to deal with a pandemic such as Covid-19,” said Kagwe.

However, as the gravity of the disease sank in, the government was able to scale up preparation with additional beds and expanded facility spaces.

“We started with an eight-bed infectious disease capacity, developed 120 beds capacity at the Mbagathi Hospital and quickly converted over 500 beds at the Kenyatta University Hospital for Covid-19,” he said.

Kagwe said he expects that in two weeks, all counties will have the necessary 300 isolation beds in preparation for the peak of the disease as numbers increase.

The surge in numbers is what informed the ministry to also develop home-based care guidelines for asymptomatic patients.

So far, 550 patients have been discharged to recuperate at home with 338 from Kenyatta University Hospital and 212 from Coast General.