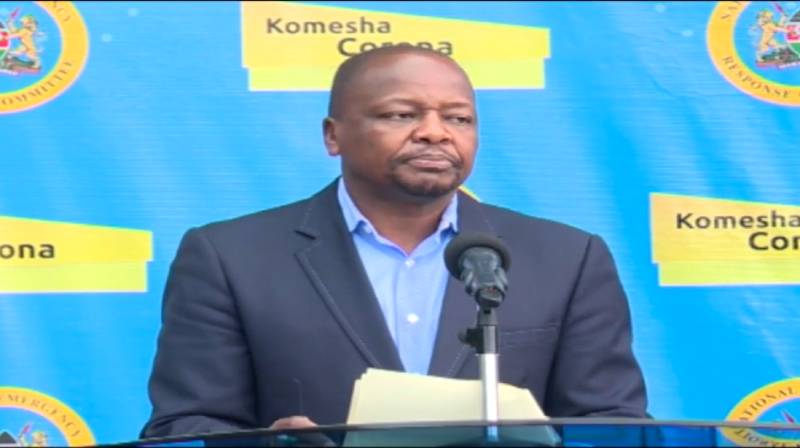 The Ministry of Health on Tuesday announced 123 new coronavirus infections, Kenya’s highest infection tally in 24 hours since it reported its first case in early March. This was after it tested the largest sample size of 3,077 in a day. So far, the country has tested over 65,000 people. Health Cabinet Secreatary Mutahi Kagwe (pictured) announced that three more people, who had underlining health conditions, had died bringing the total number of deaths to 55. Two of the three had diabetes while one had breast cancer.

The total number of infections in the country now stands at 1, 471. “Covid-19 patients are spread out in 35 various hospitals across the country. Seven patients are in critical condition, four on ventilator support and three are on supplemental oxygen,” Kagwe said. Of the new cases, 78 are male and 45 female, all aged between one and 76 years old. Nairobi, the epicenter of the outbreak, recorded 85 cases, while Mombasa had 24 and Kiambu reported 24 cases. The Nairobi cases are spread out as follows; Mathare (33), Kibera(14), Embakasi west (12), Embakasi Central (4),  Westlands (4), Ruaraka (3), Makadara (3), Kamukunji (3), Starehe (2), Dagoretti North (2), Lang’ata (1), Embakasi North (1), Embakasi South (1) and Roysambu (1).

In Mombasa, Mvita recorded nine cases, Changamwe and Kisauni had four cases each, Likoni and Jomvu had three cases each while Nyali had one case. The CS noted that informal settlements were the most affected in Nairobi, insisting that the disease was now within the communities. “No one is safe and so we should all be vigilant and adhere to guidelines by the government,” he warned. Since the virus, which causes the respiratory infection Covid-19, seems to be spreading fast within the country, the CS urged individuals to turn up for testing to curb further spread. “My appeal to all is to volunteer for testing in the estates. Knowing your status is important to you and those close to you,” he said.

This is as the public transportation sector was put on the spotlight once again for reverting to old ways and ignoring the social distancing in their vehicles. “We have noticed that many have reverted back to the old ways to travel, disregarding social distancing rules, and not obeying masking guidelines. Please let me remind you of the need to protect yourself and others. You don’t know who you are sitting next to,” said the CS.