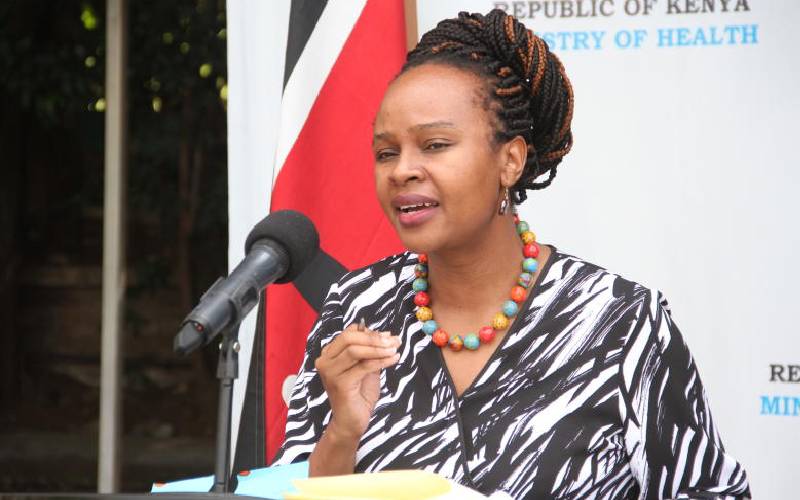 Fifteen Kenyans and a Nigerian have tested positive for coronavirus.   The 16 now move the national tally of infections to 142,  but there have been four deaths meaning there are 138 active cases.   Out of the number, 11 have a history of foreign travel. Nine of the new cases were reported from the quarantine facilities.   The  16, nine men and seven women, have so far been placed in isolation as the Health ministry conducts contact tracing.   Speaking at Afya House on Sunday, Health CAS Mercy Mwangangi (pictured) said the cases are distributed in Nairobi (12), Mombasa (three) and Kilifi (one).   Transport CS James Macharia said the ban on international flights was still on for an extra 30 days.   Evacuation flights will be allowed in, but the countries have to give a 72-hour notice before landing in Kenya.   Cargo flights with no passengers on board will also be allowed in.   CS Macharia reiterated that cargo flights will not be banned as medical supplies are still needed.   On Wednesday a Kenya Airways flight is expected to fly to China for more medical commodities.   Those in the transport sector were also urged to follow the rules set in place to curb coronavirus spread.   Ninety per cent of Kenyans use public transport, a case CS Macharia says makes the PSV crews an important link in keeping the virus at bay.   Even after constant warning, some boda boda operators still carry three passengers and some matatus violate the rule on half capacity.   Starting Monday, all PSVs and boda boda operators who violate the rules will be arrested, their vehicles impounded and their licences revoked.   Visits to prisons are further suspended for a month as the government grapples with the effects of the virus.   Questioned on why the youth are called upon in times of disaster, CAS Mwangangi said the group is the majority in the country's population and its understanding of technology may slow down the spread of covid-19.   Also present was Health Director-General Patrick Amoth who urged those in quarantine to observe the rules in place to avoid staying longer at the centres.   He said 55 per cent of all new cases are emanating from quarantine centres where the persons don't take the rules on social distancing seriously.   At the same time, hundreds of people quarantined for observation for the coronavirus are staring at huge expenses following the directive extending their stay for another 14 days.   Among them is a family of five that is putting up at Pride Inn, a four-star hotel in Nairobi’s Westlands hub, whose bill has already hit Sh400,000.   Continued forced stay means the bill would double for the three rooms occupied by the family that includes an elderly couple.   Extension of the quarantine period is linked to a supposed failure to observe the strict rules to avoid infection from the confirmed patients who have since been moved to hospital.   At the heart of the concerns is the failure by the observing medics in enforcing the social distancing rules while unfairly punishing the diligent ones who followed the guidelines.   It also would raise major concerns about whether the State should come in and subsidise the costs considering that these are unplanned expenses.   The latest development also comes after more than 20 worshippers were on Sunday arrested in Bondo after they were found attending a service despite the government’s ban on public gatherings to curb the spread of coronavirus.   According to police, the faithful of Legion Maria Church in Usenge were arrested following a tip-off by the public.   Speaking to Standard Digital, Bondo sub-county police boss Anthony Wafula said his officers managed to round them up as they were conducting the service against the government directive on public gatherings.   "Those who were arrested were taken to Usenge Police Station before being released on free bond," said Wafula.

By MERCY ADHIAMBO | 3h ago