‘Go to Mbagathi and confirm’: CS Kagwe to doubters of coronavirus 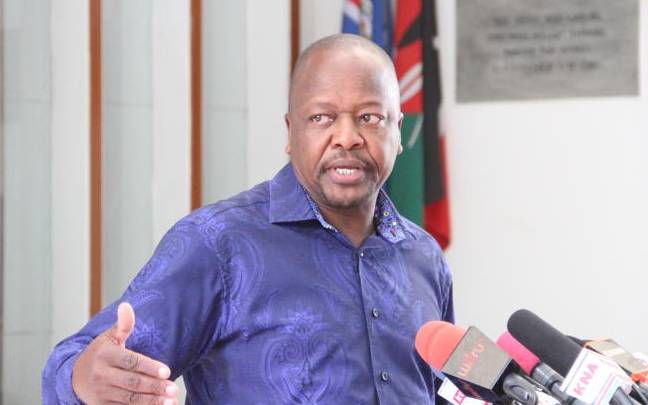 “If you are doubting the information we are giving you on the state of coronavirus in the country, you can go to Mbagathi Hospital and confirm.”

Those were the words of Health Cabinet Secretary Mutahi Kagwe (pictured) as he unleashed a warning shot to those peddling unverified information in the social media.

While briefing the press over the coronavirus outbreak on Thursday afternoon in Nairobi, CS Kagwe took a huge chunk of his time to warn those he said were giving fake news and creating unnecessary panic amongst Kenyans.

He was categorical that such people would be arrested and taken to Mbagathi Hospital- a facility the Government set aside for quarantining COVID-19 patients.

The CS who was visibly angry as he delved on the issue of misinformation on the virus said that the coronavirus was squarely in the Kenyan soil. And, that actions by government had not concealed any secrets on the status of the outbreak.

“It cannot be unreal in Kenya when it is real in China, and in the USA, in Spain in Italy and we think that in Kenya it is something to joke around with,” he stated.

He referred to an incident in which a person, whom he did not name, said in a local television station that the Ministry of Health had only screened 32 people- a statement which he fiercely bashed as false.

According to him, the Government has already screened over 600,000 people, tested 173 people out of seven of them tested positive.

Mr Kagwe said that no new positive cases were detected today and the government is persistent with the message of maintaining personal hygiene and social distancing.

“I am appealing to Kenyans to observe all the guidelines given by the government,” Kagwe.

Besides preaching hygiene practices, the Government has also come up with other measures to curb the spread of the virus as well as getting individuals tested.

Health Ministry Mutahi Kagwe revealed the plan by the State to rope in the vigilance social initiative dubbed 'Nyumba Kumi', which he said would enable the government to respond even faster.

Also, there is a random testing scheduled for March 21, 2020, to note any possible hidden cases.

“We will embark on random screening in targeted areas for members of the public commencing this Saturday.”

He advised Kenyans who have been accorded an opportunity to work from home to do arguing that there is a need for co-operation to fight the bug.

“This is not a holiday season but a time to fight the deadly a virus,” he remarked.

Today, the Public Service Commission also formailsed the integration of Ebola champions who intervened in the Ebola outbreak in West Africa. Earlier in the week, their leader Dr Perterson Wachira told Standard Digital that the group had written to the Ministry to offer assistance.

When quizzed about the quarantine issue and tracing the contacts of some suspected COVID-19 patients, CS Kagwe said the government will not spare those who breach the compulsory self-quarantine directive.

“If you leave the quarantine facilities we will know and once we know we have no choice but to quarantine you,” he warned.

He added that the State is trailing 145 people believed to have contacted coronavirus patients. Kagwe also warned against xenophobia and harassment urging law enforcers and Kenyans not to take matters on their hands.

This comes after a man was beaten by a group of people who suspected him to be suffering from COVID-19.