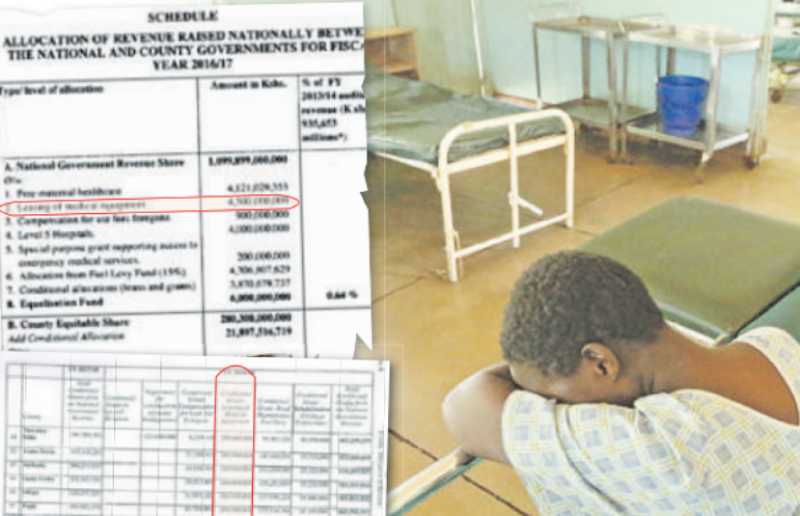 The Health Ministry is once again on the spot over a substantial variation in the controversial medical equipment leasing scheme that will cost the taxpayer an extra Sh15 billion.

Initially, the ministry had entered into a deal with five global companies for the supply of the medical equipment to two hospitals in each of the 47counties at Sh38 billion.

In the 2015 deal that attracted the wrath of governors, the ministry would deduct Sh90 million annually from each of 47 counties after it signed a seven-year leasing agreement with US, China, The Netherlands, India and Italian firms on behalf of the devolved units.

But somewhere along the way, the ministry varied the deal that has seen each county now paying Sh200 million annually from July this year.

In the variation captured in the special Gazette notice dated July 4 2018, the ministry more than doubled the costs from the initial Sh4.5 billion each year in 2015 to Sh9.4 billion in the 2018/19 national budget.

This means for the remaining three years, an additional Sh4.9 billion, Kenyans will pay an extra Sh14.7 billion over and above the Sh38 billion fixed for deal.

Council of Governors (COG) Chairman Josphat Nanok has described the deal as a “rip-off”. He says whatever the circumstances, the deal could not have warranted a 200 per cent increase on the annual payment.

“The ministry has not come out to explain to us in clear terms why there is an increase of Sh110 million in the deal that was fixed at Sh90 million,” says Nanok.

The Turkana governor says even counties that have not received most of the equipment three years on, are still being charged.

In a statement sent by Health PS Peter Tum defending the variations, the ministry said there was also need to network the equipment through a healthcare information technology system to improve the efficiency and utilisation of the MES equipment in public hospitals.

According to the ministry, through the project, the countiesnow have state-of-the art diagnostic and patient care equipment and specialised, uninterrupted service.

But COG Health Chair Mohamed Kuti says the deal was a “loophole crafted by some government officials and businessmen” to benefit some individuals at the expense of Kenyans.

“I am completely against the increase, all the governors do not know what explains the increase. Kenyans are being fleeced and burdened as we watch,” said the Isiolo Countyboss.

In the last governors’ summit, Kuti said the matter was very contentious and President Uhuru Kenyatta had ordered that a proper explanation be given by the ministry.

“We are looking forward for the explanation in the next summit, we hope the President will act on this,” he said.

In the meantime, Kenyans will continue to bear the burden of the unexplained increase in the cost of the leased equipment.

Under the agreement, counties signed a Memorandum of Understanding that would allow them to adopt the leased medical equipment that would be installed in all the 47 counties.

The suppliers of the equipment are General Electric (GE) from the US, Philips from the Netherlands, Bellco SRL from Italy, Esteem from India and Mindray Biomedical of China.

Senate Finance, Budget and Trade Committee recently weighed in on the variation, questioning the increase of funds without a proper audit on the successes or failures of the programme and called for investigation into the controversial Sh38 billion deal.

The committee questioned the viability of the financing model with three years remaining to the end of the seven-year lease programme and over Sh25 billion spent.

Makueni Senator Mutula Kilonzo Jr said the annual Sh200 million payment was steep, considering that many health facilities remained in a deplorable state, while others did not have the amenities to store the equipment.

Upon inception of the project in 2015, the governors had put up resistance against the deal, culminating in a court case in which the COG claimed the procuring of health equipment was purely the mandate of the counties and there was no reason for the national government to be involved.

They also claimed that most of the 94 county and two national hospitals earmarked for the programme lacked the requisite infrastructure and personnel to operate the machines.

In addition, CoG said the programme had plunged them into an unanticipated financial burden because each county had to pay for non-functional equipment.

Given the shortage of doctors around the country, the governors had demanded that suppliers of the equipment train and create expertise for the running of the machines.

They also wanted the five companies to pay the staff as the Health Ministry was buying the service and not the machines.

The COG later yielded after they ironed out some of the contentious issues with the national government.

Nanok said through the deal and now the increased annual repayment cash, the national government was now ripping off the counties given that they were the custodians of the cash.

“We have not gotten any explanation as to why the amount has doubled, we do not understand how a fixed deal was adjusted and necessitated the doubling of the cost. The Ministry of Health must come out and explain this to Kenyans,” said Nanok.

Yesterday, Kenya Medical Practitioners Union (KMPDU) Secretary General Ouma Oluga said the deal was only there to rip off Kenyans.

“Kenyans are losing in this deal, all the equipment have not been supplied and worst still those that have been delivered are lying idle because there are no professionals to use them,” said Dr Oluga.