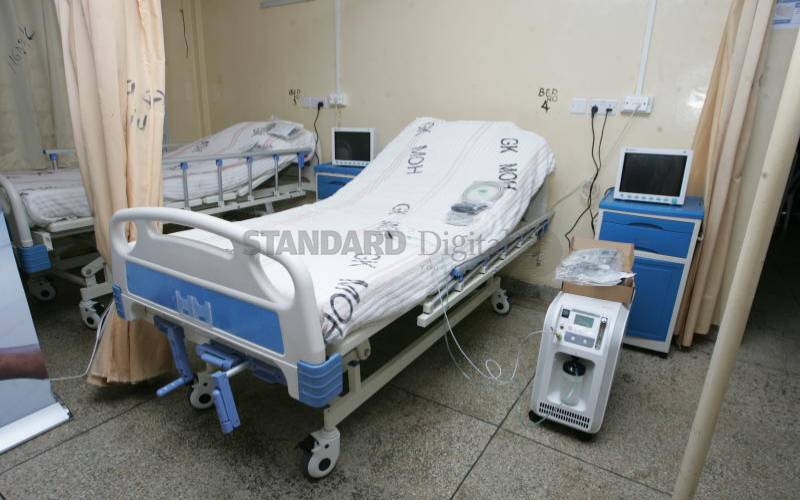 All ICU facilities within Nairobi County are full as the country experiences the third wave of Covid-19 infections.

According to Kagwe, the latest statistics is the highest positivity rate at 14 per cent compared to Monday’s at 11.8 per cent.

Some 563 patients are admitted to the hospital while 1,588 are under home-based care.

Eighty-nine patients are currently in ICU, the highest number witnessed in the third wave.

“As we had predicted, starting March the numbers have begun to rise,” Kagwe noted.

Kagwe also dispelled doubts that the Covid-19 vaccine is ineffective and unsafe.

He said the AstraZeneca vaccine had undergone approval test by the World Health Organisation (WHO) before its roll-out.

“The Health ministry recommends approval by a stringent agency. We have established an independent safety monitoring board to advise on the vaccination programme,” he said in a televised address yesterday.

The ministry also said it plans to vaccinate about 15 million people by end of June 2023, in three phases.

Already, some 4,000 Kenyans have been vaccinated, days after the first batch of the Covid-19 arrived in the country.

Some 167 people have recovered while 12 patients have succumbed to the disease, raising the death toll to 1,898.

“We have seen an increase of cases in hospitals, ICU and those on oxygen. We have to exercise extra care as we are about to start another difficult period but we can overcome it,” Kagwe warned.

She made the revelation when she appeared before the National Assembly’s Health Committee.

Facilities in other counties, she added, were yet to be overwhelmed by the Covid-19 cases.

The country has recently witnessed a rise in new Covid-19 infections after a slump at the end of 2020 and the start of 2021, ahead of the containment measures that will be ripe for review tomorrow.

Dr Mwangangi, who was responding to concerns over the rollout of Covid-19 vaccinations, also said that 4,000 people been vaccinated since last Friday, out of the one million targeted in the first phase that targets front line workers.

The second dose will be issued to recipients of the first phase in eight weeks.

She also said that the second consignment will to land in the country within the next four weeks, the first of which – 100,000 doses – is expected tomorrow.

The ministry targets to acquire 36 million doses by 2023 at a cost of Sh30 billion.  The larger bill, amounting to Sh20 billion, of the vaccine will be footed by Gavi, the public-private health partnership responsible for the 1.02 million doses that landed in the country last week.

“Eleven million doses will be financed by the Exchequer at a cost of Sh10 billion,” Mwangangi told the committee.

She added that the ministry had already engaged the World Bank with respect to funding the government’s share placed at Sh10 billion. Sh1.8 billion meant for the programme has already been allocated in this financial year.

The percentage is half of the 60 per cent target the Health CAS said is required to achieve herd immunity within the country.

The ministry will channel the rollout through some 7,877 immunising health centres across the country, which include private facilities.

According to Mwangangi, private facilities will not procure vaccines directly from manufacturers.

The country will majorly procure the AstraZeneca vaccine – with the option of the Moderna variant – as it emerged that Kenya is incapacitated to store the Pfizer vaccine which requires ultra-cold chain storage at -70 degrees Celcius.

By SIGOMBA RAMADHAN AND BRIAN MURIMI | 12h ago

Report: Covid-19 risks rolling back gains made in war on HIV
.