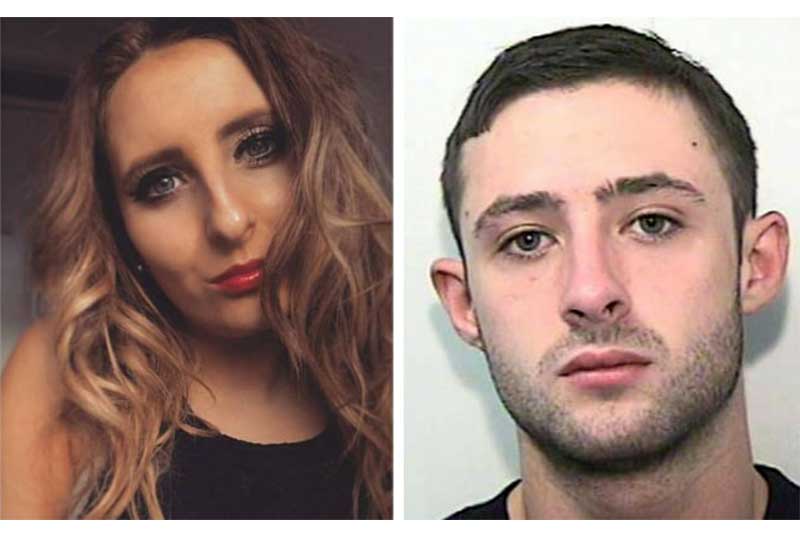 A possessive boyfriend banned his teenage girlfriend from talking to male friends over social media- unless they were gay- in a controlling month long romance.

Matthew Bailey, 24 stopped care assistant Molly Cunliffe, 19, from using Snapchat. He would regularly check her phone and wouldn't let her put kisses at the end of social media posts.

Bailey was so jealous he'd tell her what to wear and demanded she send him pictures or go on Facetime to prove she was at home or even asleep in bed. He ordered her not to swap Facebook and Instagram messages with heterosexual men, dictating that the only male friends she could contact over social media had to be gay.

Bailey has been jailed over the controlling relationship in which he bullied and belittled his selfie-loving girlfriend over how she used social media.

During the four week romance, Bailey bombard Miss Cunliffe with multiple phone calls demanding she ring him every day - and then falsely accuse her of cheating on him whenever she did not answer. During one phone call recorded by a friend of Miss Cunliffe following an argument, Bailey warned her: "You'll get a car through your front window and I'll stab you in the neck. You know what I'm capable of." He added: "Do not block my number then go home and shag. "Tell your mum and dad to sit upstairs, I'll drive a car through your gaff - take a picture to prove you're outside having a cig."

Miss Cunliffe, from Bolton, Greater Manchester tried to end the relationship but Bailey then threatened to kill her family. She went to police after a burst of 30 calls in just one morning from her obsessed partner. At Manchester magistrates court , Bailey, from Horwich, near Bolton was jailed for six months after he was found guilty of engaging in controlling or coercive behaviour in an intimate relationship.  He was also barred from contacting Miss Cunliffe for five years under the terms of a restraining order.

The court heard the couple met in April over Instagram where Miss Cunliffe has 5,000 followers and had a date at a Five Guys restaurant in Manchester. Miss Cunliffe told the hearing: "We saw each other for four days in a row and at first he was good but he started getting controlling. "On day 2 we became official - then the name calling started on day 4. I felt quite devastated and upset."We had to meet at certain times, and I have to be up and dressed at certain times.

"He would ring me several times in the morning and would accuse me of sleeping with someone else if I didn't answer. He would call me names such as a slag or a slut and he would continuously ring me, every minute - I felt like I was trapped."

Miss Cunliffe said she'd show him her phone to prove she wasn't texting other men. She said: "They had to be gay for me to message them, but he would not explain why. I have a lot of male friends, and he would tell me not to put any kisses on messages to them. He would look at my phone every day, and all the time I would spend with him he would constantly check my phone. I kept getting upset and he said he wouldn't do it again but I did not see any friends and family during that time.He would keep ringing to make sure I was at home and we had to FaceTime or I would have to send him pictures to prove I was at home. I wasn't allowed to have Snapchat because I was speaking to a boy, so I deleted it. I was not allowed to follow anymore boys on Instagram. I tried to end the relationship three times but he kept saying he would change only to then threatened to kill me and my family on the phone."

Miss Cunliffe revealed she temporarily blocked his number but then unblocked him because he threatened her. "He said 'I swear to god if you don't unblock my number,'" she told the hearing."I was at home when he phoned and said he was going to kill me and one of his friends called me and said to stop with my attitude. I was scared and told my mum and dad but he rang back and said the same things. He later messaged my mum and said 'Molly's got the wrong end of the story please don't think any different of me. But he rang the next morning around 30 times - I felt very scared."

The court heard during one incident Bailey threatened Miss Cunliffe with a pool cue in a pub after a row about him flirting with another girl.

Miss Cunlffe's father John said. "I thought Matt was very forward and very over friendly and I wasn't too happy about the relationship. He was always on her and following her about and was too possessive. He would wait for her after a 12 hours shift outside her work and Molly went into her shell more and wasn't herself. On one occasion she came downstairs in an outfit and her mum said how nice she looked but then she changed because Matt said she had to change. I thought it was wrong and controlling. Matt rang my phone on someone else's number so I answered, and he asked me why had Molly blocked him. He sounded angry. I did not approach him but I told her she needed to end it and I let her deal with it."

Bailey denied wrongdoing and said: "It was a fast moving relationship and I thought her dad liked me. She got quite jealous about my girl friends and I would look at her phone to gain stability in the relationship. When she said I would ring her every day, I would ring to wake her up for work - we had a joke that she had a personal alarm clock. She had never said that I shouldn't call. She was always on her phone. It didn't bother me at first that she was on her phone a lot, but I didn't want to be in a relationship with someone who was always on their phone."

But District Judge James Hatton told Bailey: "This was a short relationship which quickly became unpleasant. The complainant was credible and tried to end the relationship. She told the truth. Her father was concerned and described the change in her. The victim has experienced an extremely unpleasant time in her life. You were involved in domestic abuse almost through the whole relationship - you belittled her. "

Bailey was also ordered to pay compensation to Miss Cunliffe plus costs and surcharges totalling £735.