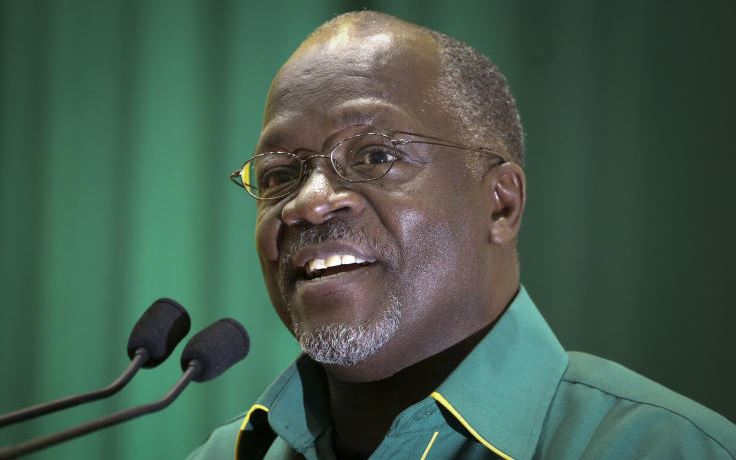 Tanzanian President John Pombe Magufuli (above) has stirred a new debate on Covid-19 in what he terms a ‘conspiracy’ even as he questioned the numbers of coronavirus cases in his country.

Addressing Tanzanians yesterday during swearing in of the new Minister for Constitution and Legal Affairs Mwigulu Nchemba, Magufuli said there could be a serious credibility problem with the issue of coronavirus testing.

Nchemba replaces Augustine Mahiga, one of three MPs who have died in the past 10 days.

He said people who tested positive for the virus may not be sick, and cast doubt on the credibility of laboratory equipment and technicians behind the results in the country’s national facility.

“We took samples from sheep, pawpaw and engine oil without them knowing and we gave them human names,” said Magufuli. These samples, he claimed had tested positive for the disease.

He termed the entire issue of coronavirus as a ploy by colonialists, most likely in cahoots with officials in testing centres.

“There is serious play going on with these tests; the players there have been bought by colonialists because these laboratories have been testing other ailments in the country over the years,” said Magufuli.

He maintained that he will not lockdown any part of Tanzania due to the raging pandemic, and urged politicians to stop taking advantage of the situation to score political points.

The president ordered his officers to investigate the national laboratory and see if there are any criminal persons that have been involved in testing the coronavirus.

“We also need to find out if these kits have been programmed such that after a certain number of tests a certain percentage turns out positive," he said.

In his speech the Tanzanian President said that samples from different animals and non-living things were given different human names before being sent to the lab.

For instance, a sample from sheep was named Jabil Hamza, a male aged 51, which turned out negative; another sample from jack fruit was named Sarah Samuel, a female aged 45 with the results turning out inconclusive.

Samples from a pawpaw were named Elizabeth Ane, a female aged 26 whose results turned out positive, while samples from a rabbit turned indeterminate and those from a quail turned positive.

He argued that it means that even the pawpaws and goats should have been isolated and put in quarantine.

Tanzania has, so far, reported 480 positive cases of the coronavirus disease, with 17 deaths and 167 recoveries so far.

Magufuli maintains that he will not lockdown the country, and has hinted at reopening the premier league, arguing that there was no sufficient evidence to show that physically active people have exhibited any symptoms of Covid-19.

Two weeks ago the president was quoted saying that fumigation serves no purpose against coronavirus.

“There is no fumigation that kills coronavirus. The so-called fumigation that was done in Dar es Salaam is stupidity. You cannot kill coronavirus using chlorine. Such an exercise only eliminates mosquitoes and cockroaches,” Magufuli said.