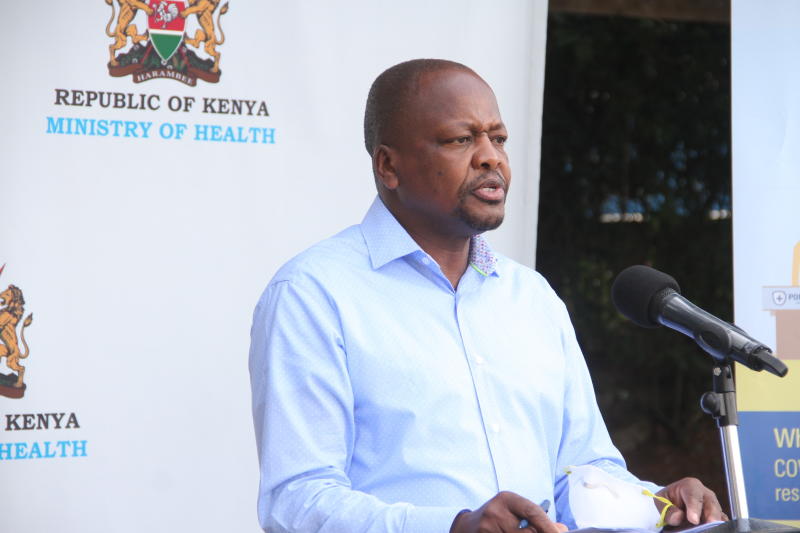 Fourteen more people have tested positive for Covid-19  bringing the number of cases in the country to 172.

In the latest update, Health Cabinet Secretary Mutahi Kagwe (pictured above) said out of the 14 new cases, twelve were Kenyans and the other two foreigners.

The 14 have been moved to isolation, with the CS urging Kenyans to brace for bad news in the wake of the respiratory illness spreading across the country.

"Let us brace ourselves for the bad news. Measures will not stop the disease abruptly. It's here with us," he warned.

Of the new infections, he said: “Twelve are Kenyans while two are foreign nationals. Four are from quarantine facilities while 10 were picked by a surveillance team".

In the latest cases, Nairobi — the county with the highest infection rate — accounted for seven positive cases. Two are from Mombasa and Mandera two while Kisii, Machakos and Kiambu had a case each.

The two cases from Mandera had travelled from Mombasa.

“The disease is here. The disease we are getting is very mild but this isn't a reason to relax. We are hoping for the best but we must prepare for the worst. We must be mentally prepared to face a situation we haven't faced before,” Kagwe cautioned.

The CS said three people had been released from isolation facilities after testing negative for the virus. This takes the total recoveries to seven.

The CS urged Kenyans to adhere to measures issued by President Uhuru Kenyatta in a bid to curb the spread of the infectious disease that has killed over 70,000 people worldwide. Kenya has recorded six deaths.

“It is important to adhere to measures outlined by the President if we are to score significant gains against the monster that is the coronavirus.”

"We have increased the capacity to monitor and trace contacts. We have tested nearly 5,000 people so far," he said adding that the testing of all health workers and medical staff in all hospitals and quarantine facilities is set to begin immediately to reduce the possibilities of infected health workers transmitting the disease to their families and unaffected patients.

On social distancing, the CS said this must also be observed in open-air sporting clubs.

At the same time, Kagwe ordered the immediate closure of golf clubs and clubhouses to curb the spread of the disease.