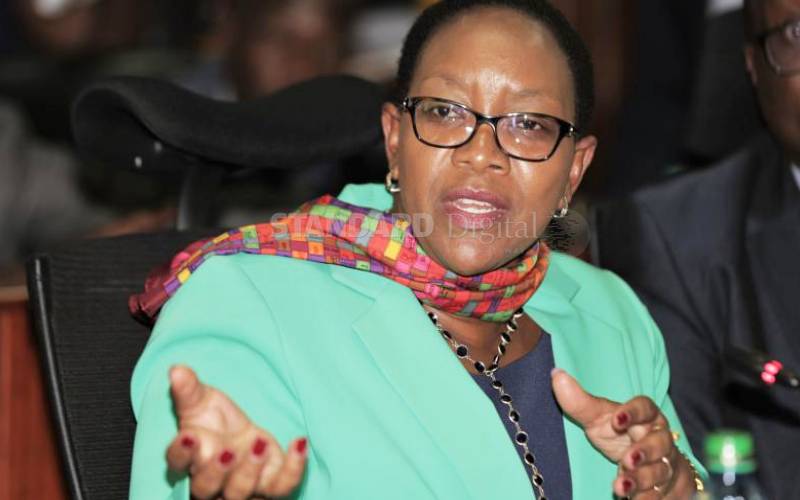 This, she said, informed the cancellation of the tender awarded to Seven Seas Technology to develop a Healthcare Information Technology (HCIT) to link hospitals under the Managed Equipment Service (MES) across the country.

However, the cancellation of the tender will expose the government to a Sh3.7 billion loss in fines should the contractor go to court to enforce the termination clause that stipulates 80 per cent of total contract sum is payable.

Kariuki told the Senate team that a former MES committee coordinator and the head of procurement held a meeting with the contractor in Naivasha, which saw the tender document altered.

This, she told the committee, was irregular.

“The HCIT contract being a National Open Tender was not susceptible to negotiations since it was competitive and an open tender. Those who went to Naivasha did not have the mandate. A negotiating committee can only be formed by the accounting officer to negotiate in either a direct procurement or in a Request for Proposal (RFP),” said Kariuki.

Documents before the committee indicate that Julius Korir, the then Health PS, had formed a negotiating committee about the tender.

Senate is concerned that cancellation of the tender is likely to cost taxpayers billions of shillings if Seven Seas proves that the government, through the Health Ministry, breached the contract.

“Even the AG says the government is exposed and we stand to lose 80 per cent of Sh4.9 billion of taxpayers’ money if the contract was signed. Are you saying that a contract signed by an accounting officer who is a PS, the contractor and a George Mutiga from KCB, is in furtherance to an illegality?” said Bungoma Senator Moses Wetang’ula, who is also the committee’s vice-chair.

Kariuki sought to clarify that the cancellation was done because the contract was skewed against the government and was only going to benefit the contractor-Seven Seas.

Kariuki argued that the acceptance of the award by Seven Seas Technologies addressed to an officer in the Ministry of Health other than the accounting officer was a violation of the strict requirements under Section 87 of the Public Procurement and Asset Disposal Act.

Kariuki has maintained that the Sh4.9 billion HCIT project was cancelled after the Attorney General advised that it was not only illegal but also irregular.

Initially, Seven Seas Technologies demanded a down payment to commence work, but this was declined after the government failed to issue letter of support that would have enabled the firm to access credit from local banks to finance the project.

The CS told Senators that the invitation to tender on July 4, 2017 required applicants to have financial, technical and production capability necessary to perform the contract and that the Health ministry would carry out due diligence before signing the contract to ascertain bidder’s capacity to deliver.

These requirements, she said, were violated.

The senators, however said the Health ministry could have withheld the necessary material that could have assisted the AG in making a legal determination of the contract.

“Is it right to conclude that the Ministry of Health officials withheld the material information that would have been used by the AG to make a determination?” posed Mr Wetang’ula.

Ms Dullo said everyone who participated in the process leading to the signing of the contract should be held accountable.