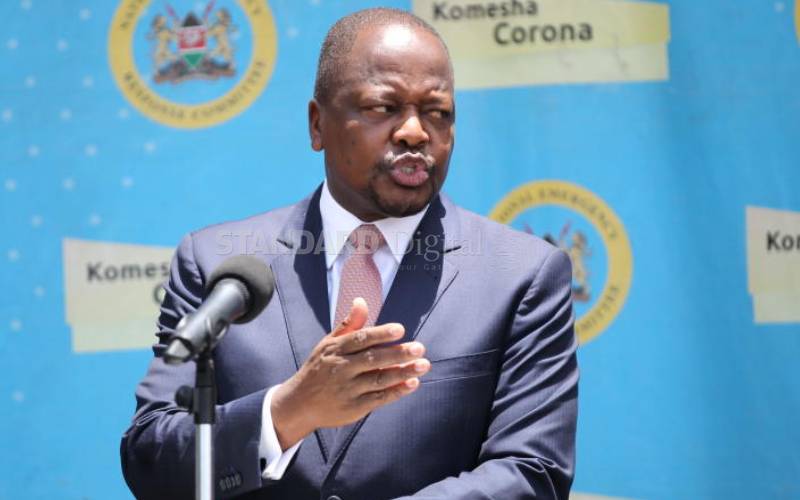 About 33 per cent of residents who have been vaccinated against Covid-19 live in Nairobi, Health CS Mutahi Kagwe (pictured) has said.

Meanwhile, the total deaths moved to 2,276 after 18 patients succumbed to Covid-19.

In the last 24 hours, the ministry reported that 1,591 patients are admitted in various health facilities, 236 of them in the ICU.

Meanwhile, the arrival of 1.2 million doses of the AstraZeneca – Oxford Covid-19 vaccine in Kenya on March 2 marked a milestone in the wake of dealing with the ravages of the Covid-19 pandemic.

The government last week confirmed that more than 800,000 doses had been dispatched for vaccination countrywide.

The trend has been witnessed in several other counties. In Marsabit, only 255 people have received the vaccine, while Tana River and Mandera account for 451 and 485 respectively. Isiolo has vaccinated 559 people, Kwale 640, Turkana 738, Makueni 745, Nyamira 855, and Taita Taveta 901.

The low numbers have been blamed on distribution in terms of facilities, with the common factor among these 10 counties being the distance between facilities. For instance, counties like Isiolo, Mandera and Marsabit rely on Garissa County for vaccination, as it hosts the regional store for the jab. Others include the low number of doses received by these counties.

Share this article on social media
Previous article
I had semen but no sperms
Next article
Dr Eddie Mairura: 'Sometimes I went for 30 hours without sleep'
.