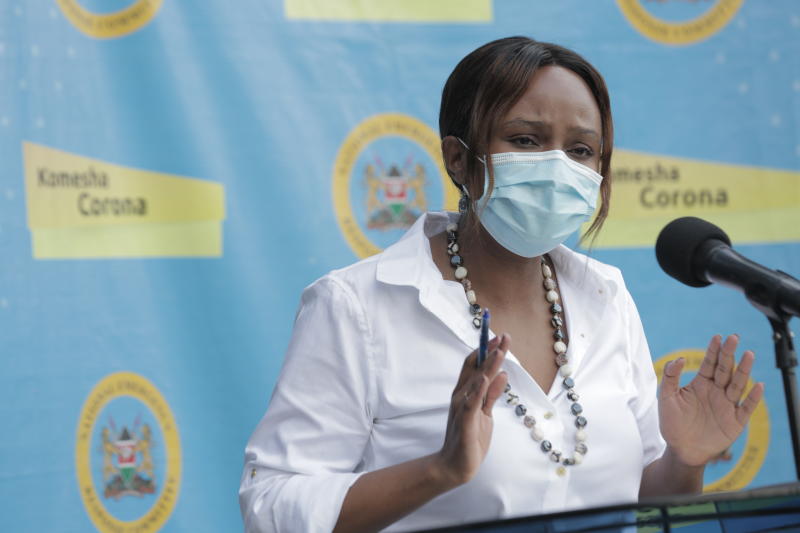 Kenya on Wednesday recorded 679 additional cases of Covid-19 as well as 18 deaths in the past 24 hours, the Health Ministry announced.

15 of the patients who died had pre-existing conditions- including hypertension, diabetes, asthma and kidney disease. The three had no known conditions.

“Unfortunately today we had a home fatality, a death reported from home in Meru. A 55-year-old female who was hypertensive,” Health CAS Mercy Mwangangi noted.

The statistics now bring to 28,104 confirmed coronavirus cases and a total of 456 deaths since the onset of the virus in the country.

Addressing the press, Dr Mwangangi said the ministry had tested 6,590 samples in the past 24 hours, which now brings cumulative tests to 369,091, since the first case was reported on March 13.

On gender distribution, Dr Mwangangi said 400 are male while 279 are female with the youngest being a month old and the oldest an 87-year-old.

Of the new cases, 658 are Kenyans while the rest are foreigners.

Additionally, 743 people have since been discharged. 685 of those were under home based care program and 58 were discharged from various health facilities. The country now has 14,610 recoveries.

Dr Mwangangi thanked the health workers for their efforts in the fight against the pandemic even as one more doctor died after contracting the disease.

“We have lost an astute health worker wo was working at Kemri Medical Research Institute. Mr Kamau Mugenda, was the Director of Cooperate Affairs since April 2017. An exemplary worker who will be remembered for human resource development, for automation of institute processes and for infrastructural development,” she said.

Dr Mugenda will be buried today.

At the same time, Dr. Mwangangi revealed that Kenya and South Africa are frontier countries in Africa in terms of vaccine trials. "We have collaboration with the University of Oxford and different other partners in terms of ensuring that when this vaccine is found, Kenya has a stake in."