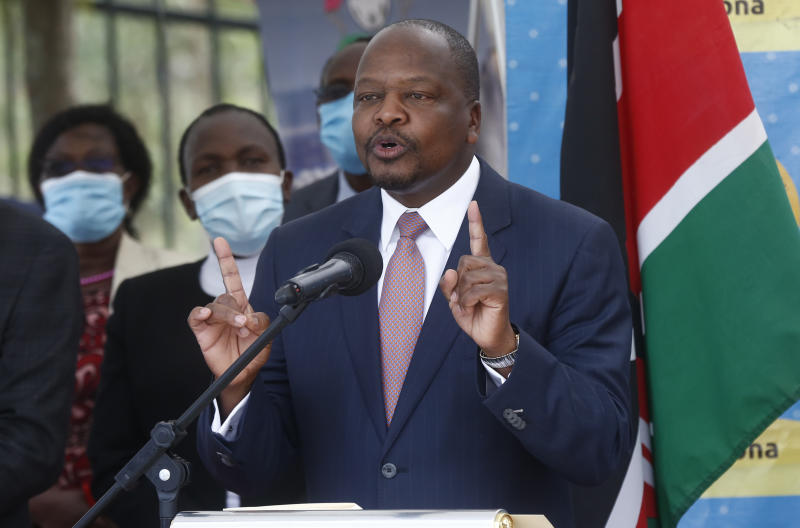 Kenya’s coronavirus caseload now stands at 19,125 after 544 people tested positive for the disease in the past 24 hours, Health CS Mutahi Kagwe (pictured) has said.

The new infections were recorded after the testing of 4,888 samples. So far the Ministry has tested 289,759 samples since the first case was reported on March 13, 2020.

12 people have succumbed to the virus in the past 24 hours bringing the country’s death toll to 311, representing a 1.6 per cent national case fatality rate.

Kagwe also noted that 113 patients had recovered from the virus and had been discharged from various facilities.

Of those who tested positive, 340 are males while 244 are females. The CS urged men to be careful as the virus continued to disproportionately affect men across the world.

According to the CS, the weather we are experiencing currently could be aggravating the situation.

“In discussions again with medical personnel and persons who are informed that it is possible that the weather that we are experiencing at the moment is also part of the reason why we may be seeing our figures climbing up,” Kagwe said.

He added; “Not so much because of the particular weather of the day but because this is the second peak season of the flu.”

Following this, he advised Kenyans to avoid congregating together and adhere to infection control measures spelled out by the Ministry.

The CS emphasised that the country had increased the testing capacity and there was enough Personal Protective Equipment (PPEs) for health workers across the country.

Kagwe applauded health workers for playing a critical role in the fight against the virus but also warned the rogue doctors who were not adhering to Covid-19 regulations.

He said 634 health workers had tested positive for coronavirus which he said is about three per cent of the cases reported nationally.