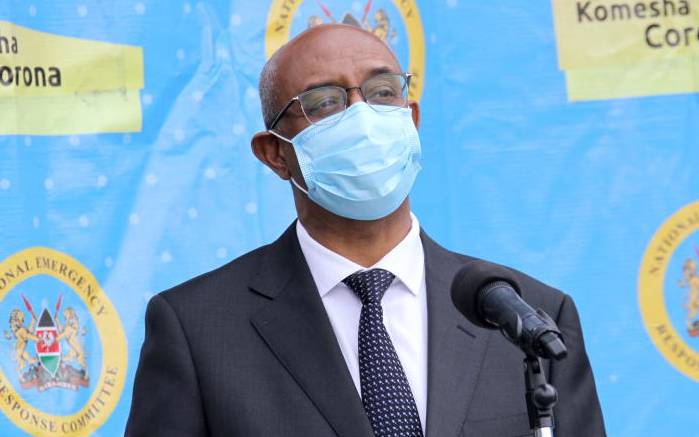 Kenya stumbled upon a mixed fortune after it posted a record number of Covid-19 recoveries and a higher death toll in the past 24 hours.

The Ministry of Health said 642 patients recovered from the bug and were released from treatment facilities, where 587 were from the home-based care and the remaining 55 from the hospitals.  Unfortunately, 12 patients succumbed to the disease raising the death toll to 250.

The health ministry also announced new 397coronavirus cases after 3,637 people were tested in the past 24 hours.

Addressing the press during the daily Covid-19 update, Health Chief Administrative Secretary Dr Rashid Aman (pictured above) talked at length about dietary preparedness to increase immunity against the disease.

He called for prioritisation of care for the elderly people who are susceptible to serious illness in case they get infected by the virus. He urged the health workers to re-channel their energies by addressing their plights by asking the elderly patients about pre-existing conditions such as diabetes, hypertension among other illnesses.

He emphasised on the eating of antioxidants, vegetable foods and limited intake of animal proteins.

Out of those who tested positive for the virus, 389 Kenyans while the remaining eight are foreigners.

More men than women continue to test positive for the virus after 236 males were found with the virus against 161 females. The youngest patient is a one-year-old child while the oldest is a 90-year-old. Nairobi leads other counties as by the highest number of infections (239) as others follow distantly with double figures.

On Monday, Health CAS Dr Rashid Aman made a passionate plea to Kenyans to strictly comply with the safety directives as he highlighted counties with higher infections.

It emerged that Nairobi, Mombasa, Migori and Kiambu counties were some of the areas stubbornly posting higher numbers. Dr Aman said extra vigilance needed to be exercised to ensure that numbers start going down in the said counties, and countrywide generally.

The country's health facilities have been overstretched forcing the authorities to embrace home-based care for asymptomatic patients. Dr Aman told reporters that the country currently has over 7,000 active cases.

Yesterday, President Uhuru Kenyatta slated a meeting with the governors to relook the Covid-19 guidelines. The meeting comes in the wake of anxiety caused by a spike in infections that has penetrated into 44 counties. President Uhuru in his past address said the relaxation of restrictions would be subject to the monitoring of infection trends within three weeks, of which, he said he could revert to a lockdown should the situation fail to improve.

Previous article
Corona era calls for a robust work from home policy focus
Next article
Pregnancy made me hate my husband's voice, cooking