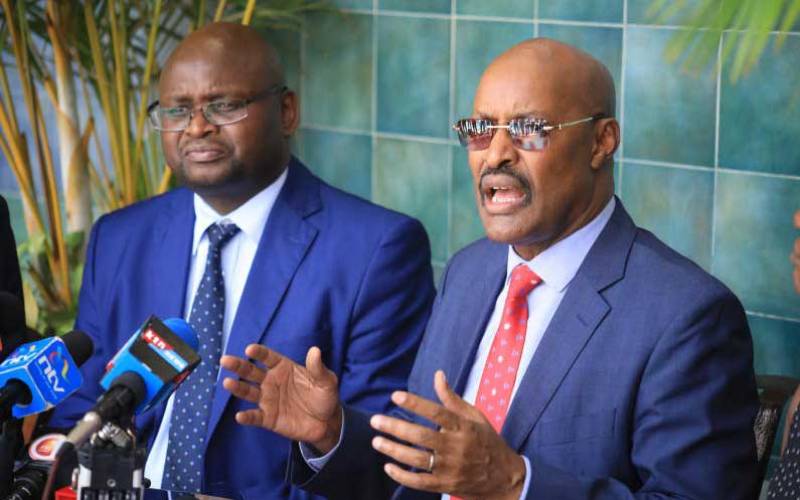 Medical professionals have called off their strike, just hours before the lapse of the 14-day industrial action notice.

Speaking to Standard Digital, the Kenya National Union of Nurses Secretary General Seth Panyako has revealed that the Government had agreed to dialogue with the health workers, on their demands.

"The Government has accepted to sit down with us to discuss our issues. We have therefore suspended the strike for 21 days. We have however, not called it off. If the conciliation process does not yield to our demands, then we will proceed for the nationwide strike after the 21 days, “said Panyako.

His counterpart from the Kenya Union of Clinical officers, George Gibore, also alluded to the statement, saying the Ministry of Health had shown a sign of goodwill to settle the issues affecting the medics. He however, sent a caution.

“If the Government fails to honor its other side of the bargain, then we will resume the strike. But for now, we have accepted their request to have us on the negotiation table, “stated Gibore.

The sentiments were also backed by the chairman of the Kenya Health Professionals Society (KHPS) Mohammed Duba, who explained the reasons for the suspension of the strike.

“We are in solidarity with the healthcare workers on the suspension of the strike. This follows a fruitful engagement between us and the Ministry of Health on Friday, May 15 and we expect to have more engagements with the said Ministry, the Ministry of Labour and the Council of Governors starting tomorrow (Monday), “ added Duba

The move by the healthcare unions seem to have considered the current coronavirus pandemic situation in the country, which is gaining traction by the day.

The umbrella body had issued a 14-day notice on the nationwide strike, if the government would not have heeded to their issues.

“We reiterate our goodwill to support the government during this period...and once more appeal to the government to address the issues within 14 days from today failure to which the unions will commence a nationwide strike,” said Duba, in a press conference two weeks ago.

KNUN and KUCO also issued similar notices to the government decrying the risky environment that the health workers were being exposed to, while dealing with Covid-19.

“We rest on our strike notice that we must get the risk allowance harmonized and considered for people who are in the frontline to get Sh30, 000. That has not changed,” Gibore said, and added that other health workers like Health Administrators have not been included in the list.

Similarly, the Unions had rejected the Sh3 billion offer from the government to cushion them against the pangs of Coronavirus. They questioned the rationale in which the money was given out.

“For example, where will our pharmacists and dentists see patients on the front line? Special clinics and consultation clinics have been closed down, when you front these people to be awarded the highest amounts, it does not make sense. We cannot take the deal as it will not address our grievances. It has even worsened the situation, increasing anxiety among our members. If this is not addressed, I confirm on May 18 the strike is on," Gibore added.

Further, the sentiments also seemed to marry with those from the nurses. Seth Panyako blaming their medical counterparts for taking the nurses for granted.

“We reject the circular by the Salaries and Remuneration Commission in totality…We are the ones who are constantly with patients on the ground and are the ones earning the least and never being promoted. Those up there keep getting hefty appraisal packages. The President gave a health package for health workers. Why haven’t we seen its benefits?” posed Panyako.

However, Kenya Medical Practitioners and Dentists Unions had embraced the offer from the government terming it timely and crucial in helping frontline workers in the fight against the deadly virus.

“KMPDU welcomes the proposal by the SRC. The package will be a key element in lessening the burden of the frontline workers. The Union applauds the commission (SRC) for the consideration, “said Dr. Mwachonda, the Acting Secretary-General, KMPDU.

The health workers had however, shown a keen interest in a dialogue with the government, saying the only easier way out of the stalemate was a round table meeting.

“We are more than ready to dialogue, and we can do teleconferencing. But we are sounding a warning to CS Mutahi Kagwe, the good work you are doing may go down the drain if we leave the doctors alone in the hospitals," says Panyako.

The suspension of the strike is now a sigh of relief for Kenyans, due to the critical role that the healthcare workers play in the current war on Covid-19.

The strike would have brought down all the gains the government had made on the war on coronavirus. The positive cases keep rising by the day in the country.

The situation in the country had forced the government to take drastic measures including extension of the nationwide dusk to dawn curfew for another 21 days, after 830 positive cases and 50 fatalities were reported by yesterday