Of men who move into women’s cribs 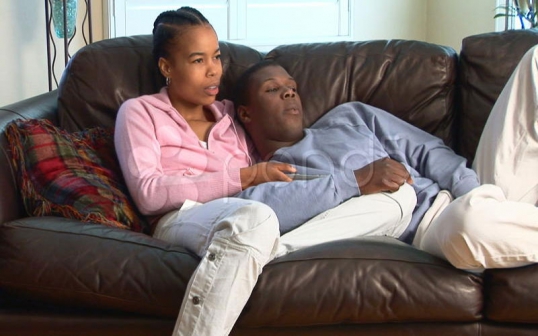 During Stone Age era, it was a woman who moved into a man's house ki-sniper style.

A hair pin left in the bathroom, a blouse and G-string in the wardrobe, handbags on the rack, lotions that could start a cosmetic section... all in a bid to mark her territory in the jamaa's bachelor pad.

How times have changed so much that male pride and its oozing machismo are at stake; men are moving into chick's cribs one item at a time!

While men were on the receiving end of being forced into come-we-stays, now the boot is on the other high heel and its women who are lamenting loudest about men moving in and marking territories; traces of their hair here, dumped used condoms there.

We conducted random interviews and found these to be some of the reasons why men lately move in with women.

1. We will get married

This is a common excuse used by lazy men who want to live off women and then abandon them when they are old and broke. Jessica Anyango, a 45-year-old mother of two has vowed that she will never live with another man until he puts a ring on it. "My first come-we-stay husband was a teacher and we met near the school. I run a salon business nearby. He used to commute for 20 kilometres from home and when we started dating he moved in with me and we got a baby. He never told me that he was married and did not even tell me when he was leaving after being transferred," Jessica shared, who hardly learnt her lesson and moved in with another teacher who left her under similar circumstances.

"I am tired of keeping men warm for their wives while they are away. I need my own man, "she said.

2. My relatives are suffocating me

Just because your man wants to spend most of his time in your house does not necessarily mean he's really in love with you. He is most probably running away from nine relatives from 'Ingo' who are running unga jars in his house dry and watching soap operas on his 14 inch TV when he doesn't want watch a Man U match.

"I don't entirely live with my girlfriend but I am mostly in her house. My brothers and cousins can drive me crazy and I need my space which I can hardly get in a two-bedroom apartment with over 10 people in the house," Baraza Wanjala shared with us. Baraza, just like his relatives does not really care about his girlfriend's feelings of him invading her house. "She doesn't really seem bothered and she shouldn't because we will eventually live together forever when we get married. This is just normal anyway," he said.

There is a common saying that the easiest way to a man's heart is through his stomach. Lencer Kwamboka, however, feels overwhelmed that her man is always at her house during all meal times.

"At first it was flattering that he loved my food, but now I feel suffocated because our relationship is not even moving forward. He already calls me wifey yet he had not even proposed. I just feel like he will keep eating here and leave me high and dry when he gets a better cook since all he seems interested in is food," says a hopeless Lencer.

Moving in is now like sex. Only that this time he is not talking about 'kichwa tu!' and for just one night.

You allow him to stay and the next thing you know his legs are up your couch, issuing commands. Peris Ngala, a senior manager in a reputable communication company invited a colleague for one night and he almost moved in.

"We were just having a fling with one of my junior colleagues. I did not expect him to think that it was a serious relationship but clearly he missed the memo. He came to my house on a Friday after work and left very early in the morning. He called me later in the evening asking if he could come over and I agreed. He never left till Monday morning as I realised he even came with more clothes which he left behind," Peris admits that his creepy behaviour led to their split. "He started coming over often and I got suffocated. I tried to tell him politely but it obviously backfired since he never spoke to me again."

Just like women who leave their inner wear and toothbrushes, men now leave their football jerseys to mark their territory. Moraa Maganga is already familiar with this trend and can smell trouble from a distance. "I once had a man who would pop in unannounced as if he was even paying rent in my house. He would change and leave the dirty shirts for me to clean, yet he was cheating on me. I later realised he was coming to check whether I was cheating on him too. If a man leaves a shirt or even handkerchief in my house,trust me, I will take it to him the following day," she said.

Men are really becoming the weaker sex. Our fathers would fight lions and other wild animals at night after seeing off our mothers, but even these days when we have mobile apps that help with secure taxi services a man will still insist that they are scared of the dark and want to sleep over at a woman' house.

"It's quite annoying because some men claim that they want to leave when it's darker to avoid the walk of shame in front of neighbours and then they refuse when it's dark, "Melisa Cherotich , a 25-year-old business lady said. Melisa, who runs her father's company says she is not ready to commit to one man and so she cannot stand the idea of a man staying in her house for more than 12 hours.

It does not always have to be a needy situation when your man moves in with you. Nancy Wambare's husband moved in after three months of dating because he was 'very lonely'.

"We had just come from a dinner from a friend's house and were talking on phone when he mentioned that he was lonely without me. He said he felt empty and decided to come over. He has never left since. We picked up all his stuff after two weeks and have lived happily for five years now, "said Nancy who is yet to become a mother. "We are so used to being together taking care of each other that sometimes we are scared of having children wondering if they might interfere with our strong bond, "she said.

Ladies beware if your man always claims to be too drunk to drive whenever you have a glass of wine each, in your house.

He is probably looking for more ways to overstay, mark his territory and empty your fridge in the morning. Before you know it, he is hanging his underwear in your bathroom and putting a claim on your extra pair of slippers.

Lena Njoki a 45-year-old boutique owner almost suffered a heart attack when she returned from work only to find her 28-year-old toy boy living in her house. "When I left that morning I assumed he would leave my house but he was in my house entertaining his friends. They drunk all my alcohol and he still had the guts to ask me if I could get them more. I called him aside to warn him against such behaviour. He finally left when my son closed school, "Lena said.

This is an excuse mostly used by broke, smooth talking men who just want to move into their girlfriends high end apartments and abandon their mabati houses. He will probably tell you that you both need to combine the money and pay for one house while he knows very well that he does not have a coin to his name. "My boyfriend and I have been staying together for six months now. When he came to live with me, he said he wanted us to split costs. I have never seen any contribution from him, not even chewing gum, "Naisaie Leteipan says adding that she does not know how to throw him out of the house.

"I realised that the guy did not have any source of income and I'm tired of his lies. I just want him to leave my house as I'm already seeing someone else," Naisae who claims that she has done extra background check on her new man.

Gladys Kimani a mother of two had to kick out her DJ boyfriend when he slowly moved into her three bedroom apartment in Kilimani.

"I did not want to confuse my children who were already wondering why 'uncle DJ' had moved in with us," Gladys, a lawyer with a leading alcohol manufacturing company told us.

The 35-year-old met her 'needy' man at a club. "We clicked very well despite our age differences. He started sneaking into my house when the kids were asleep and leaving very early. With time he got comfortable and started showing up during the day and that's how he became uncle DJ. However, with time, I noticed he was slowly taking position as the man of the house and I wasn't ready for that. One day I just packed his clothes and took them to the club where he plays and handed them over at the DJ booth," said Gladys, who is yet to hear from her toy boy.