Entertainment By The Standard

Nicknamed ‘Eldoret express’, Janeth Jepkosgei initially wanted to be a nurse and help her community but in the end she picked up athletics and once again she did not initially get what she wanted as she settled on the 800m because there was no 400m Hurdles race at a national trials which was her speciality.

As they say that is now history as Jepkosgei went all the way to be a world champion in 800m at the World Championships in Osaka, but now she wants to give back to the community that shaped her running career by nurturing the next generation of stars after failing to serve them as a nurse.

Born in Kabirirsang, a village in Kapsabet that produced famous athletics names such as Wilson Kipketer and Wilfred Bungei, Jepkosgei picked the sport while at Kapsombeiwo Primary School, where she started her athletics career reaching provincial finals in the 400m Hurdles, High Jump and Long Jump.

In 1998, she joined Sing’ore Girls’ High School, taking up Heptathlon, and went on to win the national secondary schools Heptathlon.

At the 1999 national youth trials for the World Youth Championships, she picked up the two-lap event because there were no hurdles race, but she finished second and made the team to Poland for the world event.

She went on to become a track star by winning her first international medal at the 2002 World Junior Championships in Jamaica. In 2006, she won gold at the Commonwealth Games in Melbourne.

She floored the then unbeatable Maria Mutola of Mozambique to win gold at the 2007 World Champions in Osaka, Japan and went on to win two silver medals at both 2009 World Championships in Berlin and 2011 Daegu editions.

Last year at Doha World Championships, Jepkosgei, who had won bronze in 800m eight years ago in Daegu, was elevated to silver after Russian Mariya Savinova, who claimed gold, was stripped off her medal following a doping ban. South Africa’s Caster Semenya was upgraded to gold medal.

In 2015, while still active on track, Jepkosgei thought it was now time to make her dream come true as she established Kapchemoiywo Athletics camp in Nandi, the camp which now hosts 86 junior runners from age 13-17 years old.

Before that Jepkosgei had partnered with Shoe4Africa to start the Janeth Jepkosgei Primary School in Nandi.

“I have always had a passion of working with children and I am grateful to those who have always stood and partnered with me to put smile on the face of others,” she said.

“I grew up loving athletics and I am glad my father supported me. I had a successful running career and now I want to change the life of young athletes by offering the support they need to prosper in both athletics and education, which will help shape their future,” said Jepkosgei who was also a silver medalist behind Pamela Jelimo at the 2008 Olympic Games in Beijing, China. 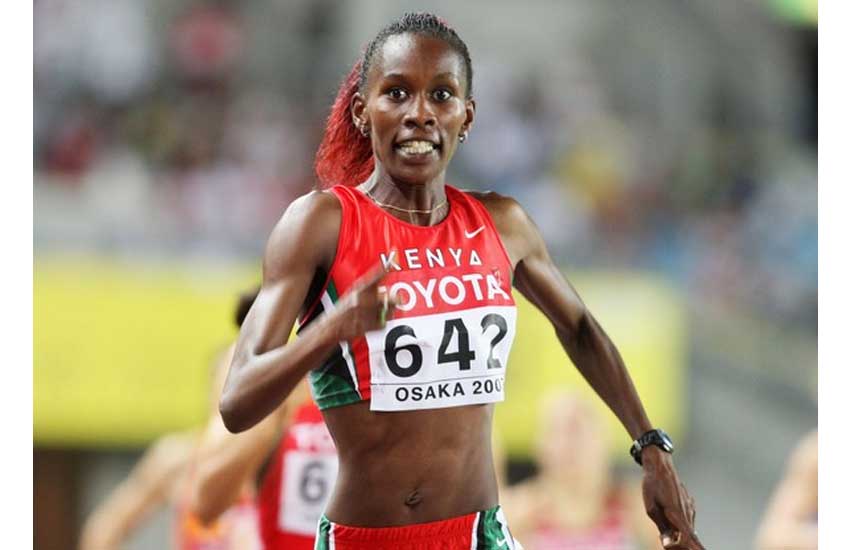 The camp has athletes drawn from Nandi, Narok, Kericho and Uasin Gishu counties and Jepkosgei is paying schools fees to 10 of them who are pursuing secondary education at Kabirsang Secondary School, Kapchemoiywo and St. Francis Kaplenyeloi.

“We ensure the youngsters embrace education, that’s why we emphasise on education first. We work with teachers very closely. The teachers also help us identify the talent,” said Jepkosgei said.

“We are also ensuring those athletes that leave our camp after clearing secondary school ensure they continue with their studies and athletics at the same time,” said the mother of one, Olympia.

On her camp Jepkosgei says the main challenge is lack of facilities and limited resources.

“We are faced with many challenges, the high number of athletes require huge resources, training facilities is another hurdle. My wish is to have fully-fledged camp with gym equipped with modern equipment. And accommodation.”

When Athletics Kenya in partnership with the government were setting up athletics camp across the country in readiness for the forthcoming World athletics Under-20 championship in Nairobi on July -7-12, Kapchemoiywo was among the 14 camps picked to nurture the talent.

AK Youth Development Programme chairman Barnaba Korir praised Jepkosgei for supporting athletics and challenged retired runners to follow her example by giving back to the society.

“We are really proud of Janeth’s contribution to the growth of athletics both for the country and community. We will like to encourage other retired and active runners to follow her example and support both education and sports,” said Korir.

Korir added: “Going to the World Under-20, with talent we have across the country, we will field a strong team and make sure Kenya’s team retain their top position just like we did in Tampere, Finland. We have laid down structures to ensure that we remain at the top.”