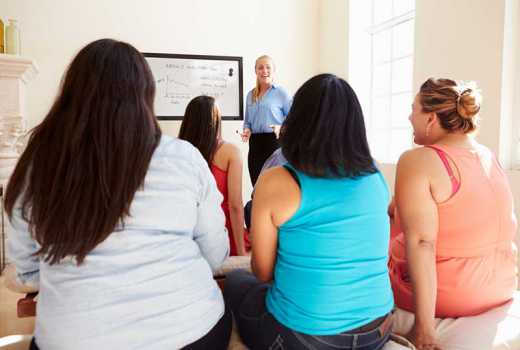 The first time Lilian Luta took note of her growing weight was when she suffered short breath while walking. She was panting: gasping for oxygen.

“It was weird,” she says. “I asked myself, ‘why am I struggling to walk?’” Beyond struggling to walk she also struggled through stairs. “I would rest at each floor: It took me time to clear stairs,” she says. She didn’t need to look further to find the answer. “Instantly, I could tell, it had something to do with my weight,” she says.

When Lilian stepped onto the scale, it swung to 92kgs. Like Lilian, Viola Apondi is struggling with her weight. At 96kgs, her weight was affecting her health and preventing her from taking part in certain activities.

Looking across through Viola’s aerobics class we can’t help but notice that there are more women in the room than men. “In our weight loss group, about 80 per cent are women: only 20 per cent are men,” Erick Opembe, a weight loss trainer at the gym says. How lopsided, we wonder. Could it be that men hate the gym?

The review of the Kenya Health Sector Strategic Plan 2014-2018 said the rate of obesity among women had reached epidemic proportions and that close to one million women, aged between 15 and 44, were obese. A 2015 report of Kenya STEPwise Survey for non-communicable Diseases risk factors (STEPS 2015) found that 38.4 per cent of women in Kenya were either overweight (BMI 25-29.9) or obese (BMI 30 or higher) compared to just 17.5 per cent of men.

At M-Global Fitness Centre, 80 per cent of those on weight loss programme are women. And it seems to be a familiar trend. How could this be? What makes Kenyan women more likely to be fat than the men?

ALSO READ: Covid-19: How to manage mental health while in isolation

It is not a secret that pregnancy comes with metabolic changes. Dr Njoki Fernandes, a health and wellness professional, says pregnancy is a physiological state in which the body stores more energy. On average, a woman piles on 10-12Kg (in a healthy pregnancy) she says. The increase in weight is more so pronounced with women who believe that pregnancy is a license to eat double portions.

“Eating for two during and post pregnancy is a fallacy,” Dr Fernandes says. Pregnancy also sees an influx in unhealthy cravings, something Dr Fernandes says women should manage consciously. “Cravings exist. However one should be able to control them instead of the cravings controlling you,” she says.

One should be able to lose pregnancy fat within six months of birth, Dr Fernandes says.

Anne Achieng gained weight – almost unconsciously. Anne had never had a baby. But at 26 she was weighing 132Kg. Once in a while she ate fast foods. But there was nothing explicit in her lifestyle that suggested she was eating unhealthily.

“It could be anything really,” she says. “It may be genetics: I have family members who have big bodies.” Genetics, says Dr Pranav Pancholi, a cosmetic dermatosurgeon at Avane medical Clinic in Parklands, are a major factor that contributes to women growing obese.

If one comes from a family of big-bodied people, the medic explains, their chances of growing fat are higher compared to those who don’t. While ‘fat’ genes don’t actually exist, Dr Pancholi observes that genes that code for metabolic functions work together to make you more likely to gain weight.

Women who experience negative events in their lives are more likely to grow fat by using food as a way to numb the pain and confusion. Psychologist Catherine Mbau explains that food (especially sweet food) causes the release of feel-good hormones in the body thereby aiding to shove away some emotional pain. “A good number of women don’t know how to process emotional turmoil. This is also true for some men although women are the likeliest to experience emotional breakdowns,” Mbau says.

If the trauma is prolonged the woman is likely to fall into a cycle of eating junk, hunger and back to junk food.

“The result is a steady increase in weight,” Dr Fernandes says.

Growing up Viola Apondi had a grip on the extent she could indulge junk foods. A few years back, however, Viola lost control of her eating when her mother fell ill and eventually passed on. “I found solace in food. I loved fast food: the likes of fried chicken and pizza,” she says.

Before she knew it she had ballooned to 96Kg.

Women, says Dr Fernandes, have bad eating habits compared to men. She explains: “Looking at the bigger picture, obesity comes about as a result of lifestyle. It is about how we live, what we eat, and how much we eat.” In Kenya, Dr Fernandes says, women tend to be the ones tasked with kitchen roles.

“We are in close proximity to food and therefore end up eating more than men. We are also more likely to develop addictions to fast foods.” A high affinity to food combined with low physical activity surely ends with a bulge, says Dr Theophilus Wangata, a General Physician.

The World Health Organisation (WHO) defines physical activity as any bodily movement produced by skeletal muscles that requires energy expenditure.

The Kenya Demographics Health Survey (KDHS 2014) found that 62 per cent of women compared to 59 per cent of men are not involved in exercise.

Women are more likely to be overweight or obese because they are women. As stupid as it sounds women have hormones that make it likely for them to gain weight.

Oestrogen, for instance, when possessed in abundance (oestrogen dominance), causes cellulite, water retention, excess weight in the hip and thigh region and an increase in breast size.

Another hormone is cortisol. The female body produces cortisol to regulate the response to stressful situations.

Sometimes the body may produce excess cortisol which prompts the body to store visceral fat around internal organs. This often appears as excess belly fat.